My heart was not strong enough for what I saw

Source: My heart was not strong enough for what I saw – The Zimbabwean 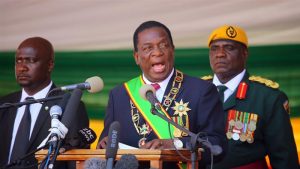 Forgive me for my emotion today. Eighteen years of writing these letters to you and almost a year after Mr Mugabe left office, we are hurtling back to the anguish of 2008. My letter from Zimbabwe this week is an open letter to our President.

Dear Mr President,
Often we hear your slogan: The Voice of the People is the Voice of God but it seems you can’t hear us. Here are some of our stories, happening right now:

My friend’s Mum had a medical emergency with her blood pressure and erratic heart rate a few days ago. The doctor said she needed some new medication urgently so they rushed to the pharmacy. Thankfully they had the medicine but it was US$40 cash or $160 Bond. With no way of getting their own US dollars out of their own bank account, they had to pay the Bond amount to save their Mum. That one packet of tablets cost two-thirds of my friends monthly salary.

When another friend with a terrible toothache got to the front of the line at the government hospital, the dentist said the tooth needed to be extracted but he couldn’t do it because there were no anaesthetics at the large provincial hospital. “You can go and buy some in town at the pharmacy,” the dentist said, “but you will also need to buy the right size needles for our syringes because we don’t have any.” When the man got to the pharmacy they had the anaesthetic vials and the needles and were very sympathetic, but would only sell them for US dollars cash. He did not have any US dollar cash and so every couple of hours the man rinses his mouth with salt water to keep the pain at bay. “Even the salt has tripled in price in the last two weeks,” he told me, rubbing his mouth.

Last month, Mr President, we heard you saying these words:  “The individual, myself and yourself, must make sure that we produce and produce.” The problem is that people can’t afford to produce anything this rainy season.

The rains have started and it is time to plough and prepare for planting. This year one hectare of ploughing costs $70, plus twenty litres of diesel for $23 and $5 transport in a kombi to town and back to buy the fuel. That means $98 a hectare before we have even found the money to buy the seed and fertilizer.  Last year 10kgs of seed cost $25, last month it cost $28 and today it is $48, the same brand, same variety. Last year AN fertilizer was US$35; last month it was $38, two days ago it was $60. “I’ll come and buy it on Friday,” a small-scale farmer told the shopkeeper. “Buy it now!” she urged him. ”On Friday it will be up again.”   The input costs are double what they were last year but income has stayed the same. “I can’t afford to put a crop in at all this year,” the farmer told me.

Two weeks ago, Mr President, when you were talking to your Zanu PF youths, you said that the Bond dollar and the US dollar remain at par, one to one. The crowd cheered and clapped at your words but this one to one rate is not what is happening in any town, on any street, anywhere. Almost everything has got two prices, one in US dollars and another which is four, five or six times more in Bond dollars or swipe (debit) cards.  Every day we are being punished because we cannot get our own US dollars out of our own bank accounts.

Last week, Mr President, you said again that it was social media that was fuelling panic buying and price rises. The reality is, that as Mums and Dads, Gogos and Sekurus, we have been in this situation before, in 2008. We know what food we need for our families and when we see it we buy it. None of us can bear the agony of not having enough food for our families, of having to buy it on the black market and import groceries from South Africa and yet already it is happening.  Already basics have become luxuries; already we are going without many things.

A few times in the past two months Mr President, you have told us that we must take the pain of your government’s new economic measures because they are necessary for the recovery of our economy.  We hear about oil barons, fuel cartels, diamond cartels, state capture, millions missing from Hwange, illegal tenders, multi-millions spent on new vehicles, private jets, and we ask: are they feeling this pain?

“I don’t know if my heart is strong enough to see what you are going to show me,” I said to a friend this week and with trepidation followed him to a room where a terminally ill man lay on a mattress on the floor. Skin and bone, confused and frail; no medicines at all to ease his pain, not even Paracetamol. Once a farm worker, evicted with everyone else in the land grabs, my eyes just welled with tears when I saw him and there were no words. No, my heart was not strong enough. Is this the pain needed to recover our economy? Isn’t it us, the ordinary people,  the life blood of our country, the human capital, that is needed to revive our economy?

I end with a message of condolence to the families and friends of the forty-seven people who died in a terrible bus crash in Rusape this week.

Until next time, thanks for reading this letter and my books about life in Zimbabwe, love Cathy.