The National Association of Non Governmental Organisations (NANGO), the official umbrella body of NGOs operating in Zimbabwe, notes with great concern the degeneration of the current social and political situation in the country. 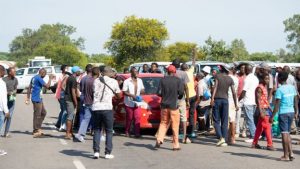 NANGO takes note of the the issues that a cross section of Zimbabweans have been raising over a prolonged period of time. Indeed there are a plethora of economic and social challenges that Zimbabweans are going through. NANGO has been engaging all political players and key government departments with the aim of creating a sustainable pathway for peace, security and development.

The economic and social deterioration over the years have relegated many into abject poverty and led to disempowerment and incapacitation of the majority. Government is not making the situation any better by not engaging all relevant stakeholders. The citizens look up to the government to implement policies and enact legislation that can contribute to the progressive realisation of social, economic, governance and environmental rights. However, the policies that the government has been implementing have not been popular with citizens and the same policies do not improve the standard of living. This has therefore resulted in widespread demonstrations across the country mainly in Harare, Bulawayo, Mutare, Kadoma and Mvurwi among other areas. These demonstrations have turned violent and reports highlight that lives have been lost and properties destroyed.

We implore the government and state security to exercise restraint as they respond to demonstrations and also encourage them to uphold the sanctity of life as prime and most important. We also urge those demonstrating to do so and respect the rights of others. We encourage all key players to resolve their differences in an amicable way that ushers in a sustainable development path.

We, therefore, reiterate the need for political players to engage in progressive dialogue that is aimed at resolving the challenges perpetuating the current structural predicament. The key political parties are skirting dialogue and this has devastating outcomes. NANGO calls on ZANU PF, MDC Alliance and other political parties to engage. These engagements should be inclusive and comprise of business, civil society, church, labour and disability sector.

We therefore recommend the following

NANGO is a non-party political, non-profit making organisation and non-denominational official coordinating body of NGOs in Zimbabwe with a membership complement of over a thousand organisations. It carries under its wings an amalgam of various issue constituencies and representative groups all with the singular focus of meeting the development needs of men, women and children in Zimbabwe.