With Zimbabwe dealing the economic fallout of COVID-19, an urgent new law has been ushered in to protect the education of pregnant young women.

With the economic fallout of COVID-19 contributing to skyrocketing rates of teenage pregnancy in Zimbabwe, a new law has been ushered in to protect the education of the young women affected.

This story was published by the The Fuller Project, a global nonprofit newsroom reporting on issues that affect women.

Cassey Simbanai was set to take her final year examinations this December. The 17-year-old Zimbabwean girl, one of the more promising students in her class, still has dreams of becoming a science teacher.

But on a recent school day, Simbanai wasn’t in her classroom or playing her beloved rugby in the nearby fields. Instead, she prepared lunch for her in-laws in their kitchen in Hauna Growth Point, a small village in the mountains of eastern Zimbabwe near the border with Mozambique. Simbanai spends most of her time doing chores for her new family while waiting to give birth to her child, who is due in January.

Within weeks of Zimbabwe imposing a strict national lockdown to slow the spread of COVID-19 in April, Simbanai became pregnant.

“We did not have much time together as I was always in school,” she says, referring to her now husband and partner of three years, a 24-year-old employee at a tobacco processing factory. “But when we went into the lockdown…We had plenty of time and it just happened. We had unprotected sex.”

Zimbabwe’s shops were shut during part of the lockdown, severely limiting access to contraceptives for rural residents like Simbanai and her husband. “He asked to marry me after discovering that I was pregnant,” she says, kneeling on a straw mat in her in-laws’ home. Even though child marriage is illegal, the pair eloped.

‘Schools are a safe haven for our children’

Before the pandemic, pregnant girls in Zimbabwe were not allowed to stay in school. But the country’s nationwide lockdown kept children out of school for six months, resulting in skyrocketing rates of teen pregnancy and child marriage, and leading the government to reverse its earlier ban. The move, which has rippled across the African continent, was heralded by child education advocates as significant for the lives of Zimbabwean girls and women who now find it easier to pursue education and economic advancement. 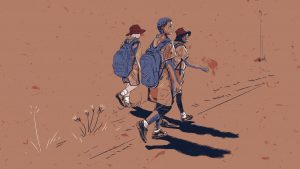 “The lockdown resulted in unintended consequences, among them child marriage. Admittedly, we have to agree that schools play an important role in being a safe haven for our children,” said Taungana Ndoro, a director of communications and advocacy at the Ministry of Primary and Secondary Education.

In August, Zimbabwe’s president Emmerson Mnangagwa amended the country’s Education Act when he signed a law making it illegal to expel pregnant girls from school. Sierra Leone overturned a similar ban in March. After receiving a World Bank loan, Tanzania pledged to improve access to education for pregnant girls, but stopped short of readmitting them nationwide. In July, Kenya’s President Uhuru Kenyatta ordered that schoolgirls who became pregnant during lockdown are “unconditionally” readmitted to school, and given access to free ante-natal care.

In 2018, in Zimbabwe, approximately one in eight of 57,500 dropouts across the country were due to pregnancy or marriage, according to education ministry statistics. Nearly all of them were girls.

Zimbabwe banned marriage for anyone under the age of  18 in 2016 but it remains common. A survey of 8,000 adult women by the country’s statistics agency in 2019 found that almost a third were married by 18 years of age, like Simbanai. Manicaland, where she lives, has been unable to eliminate child marriage. Families from Apolistic Christian sects, the dominant faith in the region, traditionally marry off young girls in their families during annual church gatherings.

While countrywide statistics are still being compiled, more than 450 schoolgirls in Manicaland province, where Hauna Growth Point is located, have dropped out due to pregnancies, marriage, illness and financial difficulties since the pandemic began, government data show. This is a significant increase compared to previous years, officials say.

In other parts of the country, residents in Bulawayo, the country’s second-largest city, are reeling from the recent suicide of a 17-year-old schoolgirl who, in the early stages of pregnancy, ingested insecticide, according to local media reports.

The new law hopes to prevent more stories like this, advocates say.

Despite getting married in May, 17-year-old Nancy Nyazungu is back in school, eight months pregnant and taking her December exams. Finishing her education is important to her; without it, she fears she’ll become a housewife with few means to become financially independent.

“This way, I know I will not be submissive to him and he will not be able to control me,” she says of her husband.

As soon as she graduates, the teenager wants to get a job, hopefully in nursing so she can help other pregnant girls as they juggle the painful decision of whether to stay or drop out of school.

Her school, like others across the country, is now providing Nyazungu with counselling as part of a nationwide effort spearheaded by the Ministry of Women’s Affairs, Community, Small and Medium Enterprises to help pregnant girls finish their education.

“Let us not blame girls when they get pregnant,” says Mwaradzika Makazouya, the head teacher at Nyazungu’s school, Sahumani Secondary in Honde Valley. Instead, she says “we will accept them.”

In the autumn, its Minister Sithembiso Nyoni said pregnant girls would be allowed to replace their school uniforms, a fitted blue skirt and white blouse, for everyday clothes – eliminating another potential hurdle as their bodies change shape and expand. The ministry also established a mentorship programme by pairing up retired, older women with pregnant teenagers across the country.

“We need to continue to support them to go to university, colleges and also to take up jobs because having a child does not mean that you cannot do much in life,” Nyoni told parliament in October.

‘An education will stop me becoming vulnerable to abuse’

Adolescent mothers in Zimbabwe now have some legal protections, but girls rights advocates worry they might feel unwelcome back in the classroom.

“Some of the girls that we have interacted with have raised concerns that as much as they want to come back to school, they fear discrimination and stigmatisation,” said Florence Mutake, program coordinator at Shamwari Yemwanasikana, a girls’ rights organisation. 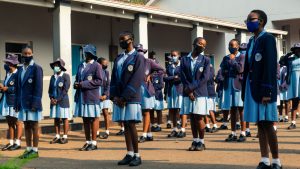 Simbanai’s mother begged her daughter to return to her childhood home and continue with her education. But Simbanai refused, fearing she would be labeled as “promiscuous” by her peers if she didn’t get married. “I had little or no choice,” she says.

Nyazungu says her classmates stared at her belly when she first returned to school but are now they are used to having a pregnant girl as a fellow student. An education will “stop me becoming vulnerable to abuse”, Nyazungu says, as she navigates her new life as a married woman.

Neither girl can escape the harsh reality of Zimbabwe’s worst economic crisis in a decade. The new law cannot correct a fundamental cause of the high rates of teenage pregnancy: the economic consequences of COVID-19. The southern African country currently suffers from a triple digit inflation rate and shortages of fuel and electricity.

‘I feel lucky. Many others will not get the chance’

Child marriage rates rise when there is increased poverty and hunger, says James Maiden, chief of communications at UNICEF Zimbabwe. “Child marriage is often a poverty alleviation strategy for vulnerable families… [but it compromises] the development of girls with little education and poor vocational training – reinforcing the gendered nature of poverty.”

During the early weeks of the lockdown, Simbanai’s husband helped keep her family afloat by giving her money for food and other essentials. Her family’s income, like those of many others, had been severely eroded by the economic fallout of the pandemic.

While Nyazungu and Simbanai married against the wish of their parents, their husbands’ families provided more financially stable conditions, they say.

Like many rural girls who drop out of school, Simbanai spends most of her time doing housework. But she desperately wants to return to school – she misses reading novels, and learning from her female teachers who “treated me like their own daughter”.

Her husband’s family has agreed to pay for her school fees next year, and he will allow her to return, she says.

Simbanai feels lucky, she says. Many others will not get that chance.