Source: No respite on corona horror… as experts warn things will get worse before they get better – DailyNews 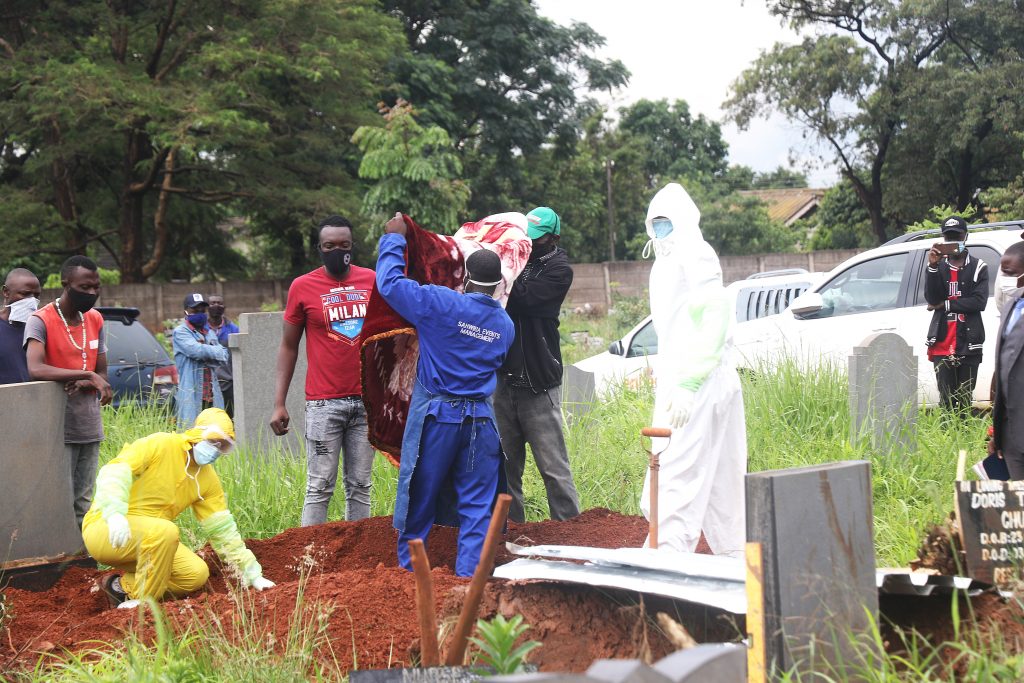 WITH the country continuing to register alarming numbers of people getting infected and succumbing to the lethal coronavirus, health experts have delivered bad news: things will get worse before they get better.

Speaking to the Daily News yesterday, the health experts also reiterated that the continuing lack of discipline among Zimbabweans was a major exacerbating factor for the pandemic in the country.

This comes as the government has escalated its efforts to procure much-needed vaccines, which President Emmerson Mnangagwa says will be imported into the country as soon as possible — to curb the local spread of the killer virus.

On Monday, the country recorded its worst daily fatalities toll to date, with 70 people succumbing to the disease — and surpassing the previous high of 60 fatalities that was recorded two weeks ago.

Of concern to both authorities and health experts is the fact that the Covid-19 death toll has more than trebled over the past three weeks — jumping from the total of 369 fatalities which were registered between March last year and January 1 this year, to a worrying 1 075 deaths as of yesterday.

And with deaths remaining in the double figure range, doctors predicted more fatalities ahead yesterday, before the disease is brought under control.

“This is just the beginning. When a pandemic hits a community, there will be loads and loads of deaths and we are not even close to where the pandemic can go,” highly-regarded Mpilo Hospital acting chief executive, Solwayo Ngwenya, told the Daily News.

“What we are seeing now are called index deaths. We cannot expect deaths to decrease anytime soon. We actually have to expect more deaths, especially with the way people are behaving towards the virus.

“We are going to experience the consequences of us allowing the virus to spread. We have not seen the worst of it yet,” Ngwenya further told the Daily News.

The secretary-general of the Senior Hospital Doctors Association (SHDA), Aaron Musara, concurred with Ngwenya warning that poor discipline and the lack of adherence to current restrictions would fuel Covid-19 infections and deaths in the country.

“Currently, there is no adherence to control measures to an acceptable level, yet strict adherence to the preventative measures against Covid-19 is one effective way to bring down death figures.

“People are not following Covid-19 rules and as long as people are flouting the control regulations, Covid-19 cases and deaths will continue to increase,” he said.

On his part, the secretary-general of the Zimbabwe Association of Doctors for Human Rights (ZADHR), Norman Matara, attributed the ongoing high coronavirus fatalities to late admissions at hospitals and “too much trust in” home remedies by some citizens.

“A lot of people are delaying going to hospitals and when they do, it will be too late, which explains why deaths are increasing.

“The health system also needs to be attended to before things get much worse than they already are. A lot of people would have survived and in future will survive if there are enough resources in hospitals.

“The costs in many hospitals are also not allowing an ordinary person to get treatment in those hospitals that are taking care of Covid-19 patients, which means that they will just suffer at home till they die,” Matara told the Daily News.

This comes as Zimbabwe is set to receive at least three million doses of the Covid-19 vaccine as part of the World Health Organisation-led Covax programme.

Apart from WHO, Russia and China have also approached the government about supplying vaccines to tackle Covid-19 pandemic in the country.

Speaking at the weekend, Mnangagwa said the government had engaged countries that had developed vaccines, to ensure that Zimbabwe gets enough doses to administer to as many people as possible.

“Help is on the way. Your government is doing all it can to ensure our nation is defended and protected,” he said, adding that frontline health workers would be the first to get the doses.

“Once we receive the vaccine, and it will be quite soon, they (health workers) will be the first ones to be inoculated,” Mnangagwa added.

This comes as the second wave coronavirus drumfire has deepened since the turn of the New Year, with the global pandemic’s local death toll now having passed the 1 000 mark.

It also comes as the deadly virus has so far claimed the lives of four government ministers, with many more said to be bed-ridden in hospitals.

Such has been the devastating effect of the virus that the country’s major hospitals are now struggling to deal with the high numbers of patients battling the deadly respiratory disease, who require admission.

In addition to being unable to take more patients, stretched private hospitals are also charging hefty fees which are beyond the reach of the majority — with some of them demanding anything between US$1 500 and US$10 000 upfront from patients for admissions only.

Zimbabwe has entered the final week of its stiffened lockdown which a large cross-section of Zimbabweans — including medical experts — want to be tightened further in light of the runaway deaths and rapidly spreading infections.