No turning back for Zimbabwe, but is it the start of real change? 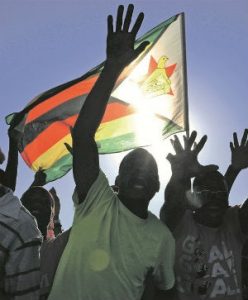 At long last, the big day has finally arrived. Since Zimbabwe’s November 2017 political transition, the entire country has been preparing for elections that will mark a clean break from the past, writes John Siko.

Source: No turning back for Zimbabwe, but is it the start of real change? | News24

Zimbabwean voters at an election rally yesterday. This week’s poll is the first without Robert Mugabe as head of Zanu-PF and has given citizens a sense of optimism that the country’s fortunes are about to change. (AP)

At long last, the big day has finally arrived. Since Zimbabwe’s November 2017 political transition, the entire country has been preparing for elections – which are being held today – that will mark a clean break from the past.

For two decades, Zimbabweans have suffered from disastrous economic policy-making and bouts of political repression that have impoverished the nation, forced millions into economic exile, and brought on targeted Western sanctions that have deprived the country of external investment. Whoever wins power today (or possibly in a September run-off) – Zanu-PF incumbent Emmerson Mnangagwa or MDC Alliance candidate Nelson Chamisa – will inherit billions of dollars of debt, critical shortages of foreign exchange, rickety infrastructure, and the need to make politically painful cuts to a bloated civil service and state-owned enterprises.

This might sound like a poisoned chalice for the victor. Indeed, this situation will require skilled leadership and difficult choices to right the listing economy. However, even taking into account these difficulties, Zimbabwe is on the cusp of a bright future. The trick will be creating a policy environment that can take advantage of the country’s bountiful natural and human resources. If the new government can do so, Zimbabwe should emerge as the continent’s most exciting investment destination for the next decade or more.

Encouragingly, both the MDC and Zanu-PF are running on broadly pro-market platforms that emphasise the need to draw in outside investment to grow the economy. In fact, there are relatively few substantive differences between the two, with the MDC’s call to join the Rand Zone the only notable point of departure between them. For the MDC, this is no surprise; the party has taken pro-market positions since its inception in 1999, opposing government policies around land expropriation and indigenisation that have contributed to the economy’s ruin.

For Zanu-PF, however, this represents a far more drastic shift. Under Robert Mugabe’s leadership from independence in 1980 until last November, the Zanu-PF government was characterised by broadly socialist policies, ostensibly introduced to improve the lives of Zimbabweans but often implemented to reward cronies and punish enemies. The past decade was marked by high degrees of inconsistency, opacity, and uncertainty around policy formulation – spooking what few investors remained – as well as mounting corruption.

The November transition, however, brought a drastic shift. Almost overnight, once die-hard Marxist-Leninists changed their tunes, echoing President Mnangagwa’s rhetoric around the need to draw in outside investment and create a business-friendly environment that could transform Zimbabwe into the “Singapore of Africa”. More tellingly, words have been matched by deeds. The past eight months have brought some sweeping changes: the scrapping of 51% local ownership in all but a handful of sectors; the introduction of bankable 99-year leases to reinvigorate the agricultural sector; the announcement of plans to privatise parastatals; and even cuts to the civil service.

Several businesspeople, Zimbabwean and expatriate, have told me in recent months how open and responsive senior government officials have been in discussions, a distinct shift in how the ruling party operated in the past. Again, the structural headwinds left over from decades of misgovernance by the Mugabe regime are enormous, with the country depleted of foreign exchange, strapped with a massive debt burden, and served by crumbling infrastructure. No matter who wins the election, necessity will force them to fully embrace sweeping economic reforms.

Can Zanu-PF be trusted?

Of course, the real question with Zanu-PF is a simple one: Can it be trusted to continue these efforts if Mnangagwa wins the election and the party a majority of seats in parliament? There are several reasons that I believe it can. First, my conversations with senior party members suggest to me that they genuinely do understand the need to put in place sensible policies, both for the country broadly and (in many cases) for their own business interests.

Secondly, they seem to truly understand that while Zanu-PF may win a narrow victory this time, continued economic stagnation will doom the party to obsolescence the next time around. And lastly, I am aware of additional reforms that a Zanu-PF government is likely to roll out immediately after the election, notably around privatisation and streamlining government economic decision-making. Ultimately, the ruling party has painted itself into a corner, and its leaders realise that only drastic action will allow it to escape.

Still, all of these positive actions and rhetoric are moot without a clean election that is acceptable to international donors and investors. So far, with the exception of some questions around the voter roll and the grenade attack on the Mnangagwa rally last month, the election process has gone smoothly. The violence and intimidation of past polls is gone. The government must now ensure that vote counting is done in an open and transparent manner, and that the military accepts the election results no matter what they may be. This is absolutely necessary for Western governments to endorse the result and, ultimately, lift targeted sanctions and allow Zimbabwe to fully rejoin the international community. Without this, Western businesses will remain hesitant to invest.

It comes down to today. The door is open for Zimbabwe to properly rejoin the international community and see its economy take off, not matter who wins power. The government must now ensure that in the coming days, it takes all the right steps.

– Dr John Siko is an associate director with the Risk Advisory Group in London. He previously spent 15 years in the US Government, mostly focused on southern African political affairs.