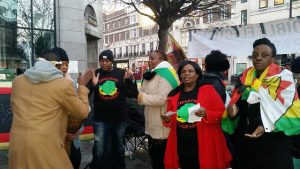 Zimbabwe’s biggest food processing company has closed its wheat mills because of the foreign currency shortage. Lack of foreign exchange means we have perennial fuel shortages. One can’t buy medicines from pharmacies without US dollars. But if you try to get dollars from money changers you could go to jail.

Zimbabwe is desperate for investment so it is sobering to learn that it is neglecting the opportunity to get billions of dollars under China’s Belt and Road initiative. This programme and its accompanying Forum for China/Africa Co-operation involves a planned trillion dollars to build railways, ports and other infrastructure on three continents.

The acting Chinese Ambassador, Zhao Baogang, told a media briefing in Harare that he was surprised that an ally as desperate for investment as Zimbabwe had not applied for some of this money. ‘Abundant resources are there and they are just waiting for you’, he said, adding that every time he engaged Zimbabwean officials about the matter they had not read the relevant documents. ‘I just give my constructive proposals and sincerely wish that everyone will come and read them’, he said. ‘If you don’t you will not come up with very good projects’. (See: https://bulawayo24.com/index-id-news-sc-national-byo-151018.html.)

Criticism of Zimbabwean representatives also appeared in an opinion piece by Gary Kleiman, founder of Kleiman International, specialists in global financial emerging markets, published today in the London Financial Times. He criticised  a recent Zimbabwean delegation as ‘inexperienced at global investor gatherings’ and described their presentation as poor. Mr Kleiman suggested a joint foreign and domestic taskforce could help to clear a path to financial stability (see: https://www.ft.com/content/492aeb6e-f8b3-11e8-af46-2022a0b02a6c).

Against this background it is not surprising to read of the difficulties facing new finance minister Mthuli Ncube. One observer, the Zimbabwean journalist Blessing Vava, says the minister had been put on a ‘tight leash’ and is being forced to take decisions on political and not economic grounds.

Mr Vava says the dilemma facing President Mnangagwa is that serious reform would jeopardise his own position. He concludes: ‘The Zanu PF government knows what needs to be done but it is unwilling to undermine its own political interests.’ (See: https://www.facebook.com/permalink.php?story_fbid=1141691346007650&id=289756887867771&__tn__=K-R).