Not repeating the mistakes of 2013 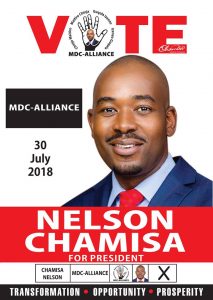 Source: Not repeating the mistakes of 2013 – The Zimbabwean

“The spirit of freedom abounds across the land and I am humbled to be walking hand in hand with you to our inevitable final victory.”  These were the words of Nelson Chamisa, leader of the MDC Alliance, this week at a press conference in Harare; words that inspired you to keep listening. Exaggeration and off the cuff absurdity had gone and his words captured the feeling in our hearts just three weeks before elections.

“As I traverse the country, I see great hope and deep passion in the eyes of the people,” Chamisa said, and it is exactly this sentiment that best describes the mood in Zimbabwe, seven months after a military coup led to the resignation of 94 year old Robert Mugabe. Hope and passion; everywhere you go, everyone you talk to, we are all wondering if this time, this election, we dare to hope.

In my home town from street to street and tree to tree, the mid winter freezing rain this week has reduced many of the hundreds of Zanu PF election posters to a soggy, melting mess on the roadsides. Most people dare not even clear away the pieces of the soggy posters; decades of political violence at the hands of Zanu PF have not been forgotten and have left us untrusting and very wary, and so we just walk on by. Chatting to a 34 year old Born Free (born after Independence) recently, his heartfelt words said it all: these guys (Zanu PF) have been in power all my life; they are so wealthy but look at us; things are getting worse and worse; we can’t even get a dollar from the bank; I want my chance to have a life.

Alongside the stirring words in his press conference and with barely three weeks until Zimbabwe’s election, Nelson Chamisa said the MDC Alliance were “declaring an election crisis.” Nelson Chamisa said that the voters roll is not fit for purpose, not legally compliant and has “multiple registrations, wrong names and addresses of voters and serious inconsistencies.” He said that ZEC (the Zimbabwe Electoral Commission) have: “refused parties an opportunity to observe the printing of ballot papers and are now printing without the knowledge or input of stakeholders; not put in place mechanisms for joint storage of ballots in a secure manner; not put in place mechanisms for transparent distribution of printed ballot papers, and have allowed the state media to run a smear campaign against opposition candidates.”

“For the avoidance of doubt, we do not and will not accept the current ballot paper that has been printed without our participation,” Mr Chamisa said. He laid out six steps that need to be urgently undertaken and ended by calling on SADC, the AU and the international community to “intervene and save a collapsing process and abate an imminent legitimacy crisis.”

Two or three times during the press briefing MDC Alliance leader Nelson Chamisa said: “this time we are not repeating the mistakes of 2013.” For people who don’t remember, Zimbabwe’s election in 2013 was a complete farce; the voters roll was never produced; multiple thousands of resident citizens had been unable to register to vote; there was no vote for Alien Zimbabweans or those in the Diaspora;  media and security sector reforms had not been undertaken; on polling day countless people found they had been changed to different polling stations, different wards, even different constituencies. When the results were announced the MDC  said they did not recognize the outcome but yet again we were left to flounder through another five years of ruinous policies at the hands of greedy, corrupt, self serving politicians.

Winning the hearts and minds of Zimbabweans is not at stake in this election. We are not fooled by the ruling party’s charm offensive. How can you be fooled when you go to work on the pavement, live crammed in one room, can’t afford to go the doctor or pay school fees, can’t even withdraw your own money out of the bank. We know which party has done this to Zimbabwe and we know Mr Mugabe did not do it alone.

“Watch this space,” Nelson Chamisa reiterated, “we are not repeating the mistakes of 2013.” We are watching, Mr Chamisa, because  the old saying is very much in our minds: “The people who cast the votes don’t decide an election, the people who count the votes do.”

Until next time, thanks for reading and for supporting my latest book “When Winners are Losers” and other books about life in Zimbabwe, love cathy.