Patson Manyati cuts an awkward and lonely figure in a room bustling with young people in their twenties. His elegant poise, greying beard and baby blue shirt place him at least 40 years too old for this scene. 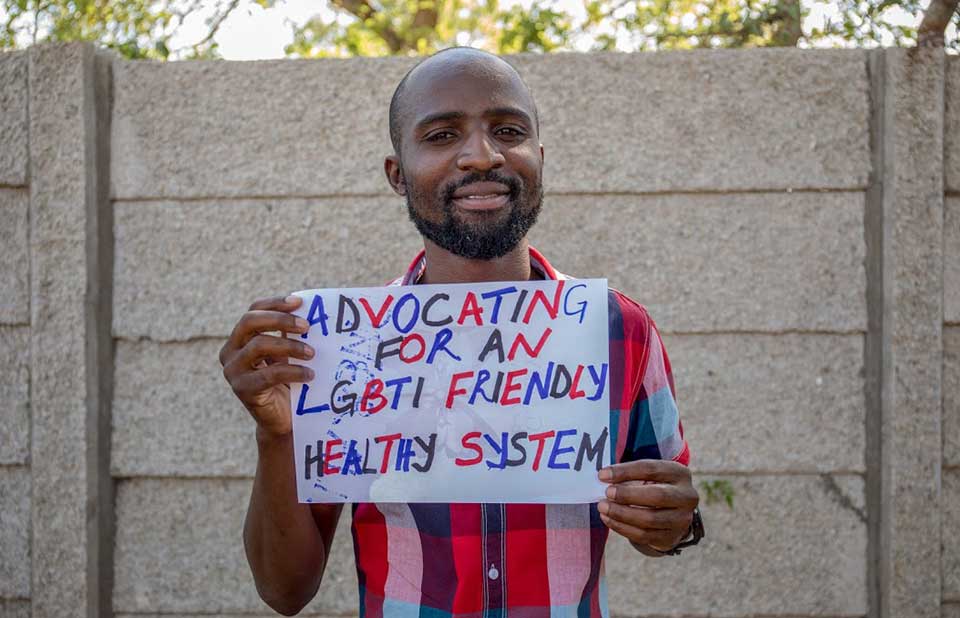 Mr Manyati is on one of his first visits to the drop-in centre of Gays and Lesbians of Zimbabwe (GALZ) in Mutare, in eastern Zimbabwe. GALZ is a membership-based association that promotes, represents and protects the rights of lesbian, gay, bisexual, transgender and intersex (LGBTI) people in Zimbabwe.

While Mr Manyati may look out of place, being at GALZ is the most “comfortable” he has ever felt as a gay man living in Zimbabwe in his 60 years.

“When I see people like me, I feel very happy,” says Mr Manyati in his musical, soft-spoken voice. His eyes don’t stop shimmering while he talks. Remarkable for someone who has grown up around pervasive homophobia. The kind of homophobia that, as recently as 2017, saw the former president describe gay people as, “worse than dogs and pigs.”

GALZ maintains that the hatred and fear caused by the late president’s particular brand of homophobia, “is still being felt in Zimbabwe today.”

While being at GALZ makes him happy, as soon as Mr Manyati ventures out beyond the gates of the premises, he must be guarded and vigilant. Beyond the insults, the threat of jail is real, as Zimbabwe punishes same-sex sexual relationships with up to 14 years imprisonment.

Beyond jail, there is the everyday lived experience of discrimination, violence and hate crimes with which LGBTI people must contend—not only in Zimbabwe, but also in the 69 countries worldwide that criminalize same-sex sexual relationships.

And even in countries that don’t, like neighbouring South Africa. While same-sex marriage is legal and LGBTI rights are constitutionally enshrined, being gay is dangerous. In the first half of 2021, there has been a spate of murders of young gay men and an outcry from the LGBTI community for the government, media and public to take hate crimes more seriously.

Under these conditions, it is an act of defiance just to exist and, even more so, to be deliberately happy.

Happiness is something Mr Manyati has tried to carve out for himself, despite the odds.

Born in Mutoko, a small town in Zimbabwe’s Mashonaland East Province, Mr Manyati says his parents expected him to get married in his twenties to a woman and to carry on the family name as one of the seven Manyati sons.

While his parents insisted on marriage for some time, Mr Manyati stood his ground. As the sole caregiver for his parents and siblings, they eventually gave in and he lived his life single, never coming out to his parents.

“I couldn’t get married because I have the body of a male but, inside, I feel like a female. I know I am … I feel … like a female. So why should I marry a female?”, he says, visibly grappling with complex concepts about his gender identity without the vocabulary to do so.

Here at GALZ, everyone tells him “who they are,” says Mr Manyati. Perhaps with a few more visits and more interaction with the young people around him, who are so much more self-assured in their sexual orientation and gender identity, it may not be too late for Mr Manyati to give name to his feelings.

GALZ is a lifeline for its members. It offers regular clinic days at its Harare drop-in centre and referrals at its other drop-in centres, in Mutare and Masvingo, for a range of health-care services, including HIV prevention and treatment. It also provides critical counselling services and safe spaces for LGBTI people to socialize and relax, away from the “harsh” streets.

The leadership at GALZ says that things are slowly getting better for LGBTI people in Zimbabwe.

In 2017, GALZ was included as an official participant in the funding proposal developed for the Global Fund to Fight AIDS, Tuberculosis and Malaria. This helped to secure US$ 2 million for programmes that serve gay men and other men who have sex with men, the largest investment ever in an HIV and sexual and reproductive health response for the community. The funding resulted in the three GALZ drop-in centres.

The National AIDS Council (NAC) of Zimbabwe has a key populations forum, supported by UNAIDS, and of which GALZ is a member. The NAC is visibly working to improve the health and well-being of key populations even while their activities remain criminalized.

Despite progress, the lingering stigma and discrimination that the LGBTI community faces in Zimbabwe has resulted in Mr Manyati and people of his generation leading an isolated life.

“It makes me feel safer to rather stay by myself,” says Mr Manyati, adding that all his peers and friends from the LGBTI community have since died. “Sometimes I cry,” he sighs.

When Mr Manyati’s friends were alive, they would live their lives to the fullest, even though the law was a constant threat and they remained unlucky in love with the men they encountered.

“[You would know] he doesn’t really like you because he has another love somewhere and you are just one on the side. In the end, he gets married and leaves you,” says Mr Manyati of these encounters.

Mr Manyati is adamant that he is “too old” to look for love now, and that he would rather focus on looking after his health as one of the estimated 1.4 million Zimbabweans living with HIV.

Mr Manyati discovered he was living with HIV when he developed a cough five years ago. He went to a local nongovernmental organization, New Start, for an HIV test and after a course of tuberculosis treatment he was initiated immediately onto HIV treatment. His health is his main priority.

* Not Yet Uhuru is a quote by the Kenyan freedom fighter Oginga Odinga. Uhuru is a Swahili word meaning “freedom”; thus, it loosely means “not yet free”. It is a hashtag routinely used by GALZ in its social media posts.