A HEALTH expert has described First Lady Auxillia Mnangagwa’s cookout traditional meal competition as an insightful intervention which will unlock immense nutritional and medicinal benefits from indigenous dishes and so benefit national health.

Ms Kudzai Mawoneke, a nutritionist from the Ministry of Health and Child Care, told the colourful event that had a variety of well-presented traditional dishes held at Marondera High School yesterday that healthy food and eating goes a long way in minimising health disorders from eating over-processed food and bad diet choices.

The First Lady took her African-themed cookout traditional meal competition there to ensure people embrace indigenous food and share knowledge on how to prepare the dishes.

Ms Mawoneke said: “We are very glad Amai that you have brought this programme to prevent many diseases. We have many children suffering malnutrition and diseases like diabetes and high blood pressure which come as a result of poor access to healthy food. 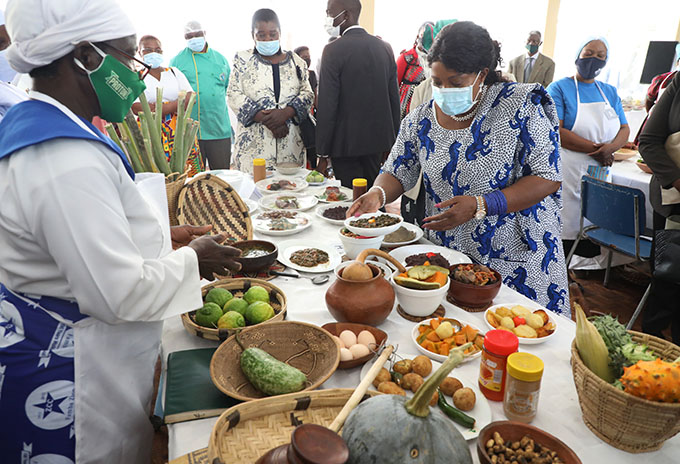 “On the dishes that have been prepared today, we have traditional grains. These foods are helpful because they contain iron which ensures we have enough blood in our bodies.”

Ms Mawoneke told participants that traditional grains are encouraged for people who are diabetic and hypertensive because they have low digestive index.

“That is the reason why when we consume traditional grains, we spend a long time full. The food is not broken down fast. This also means because the food is digested slowly, the sugar levels in the body rise slowly and won’t shoot up. This helps preserve our health,” she said. 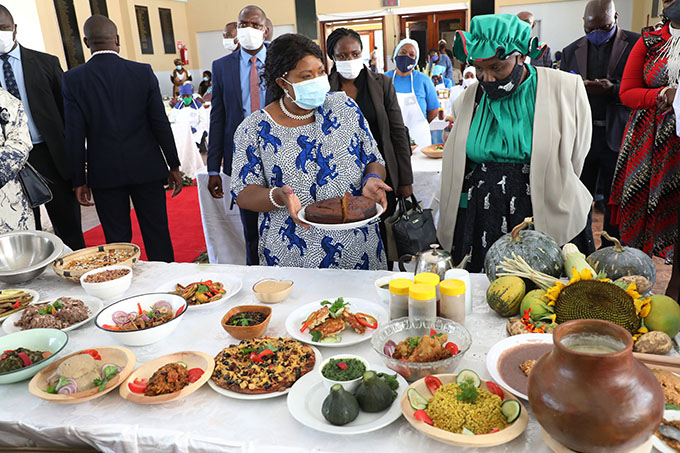 People should not get sick first to appreciate the benefits of traditional dishes.

“Do not wait to fall sick to be advised by doctors to consume sorghum sadza. Let’s continue eating millet sadza to protect our health. We have seen baobab fruits here which contain a lot of potassium and calcium to strengthen our bones.

“These are the kind of foods that were eaten by our ancestors. Long ago people would live for many years unlike today where one quickly sustains a fracture after missing a step. Let’s return to our traditional foods. In baobab fruits there is also a lot of vitamin C.

“When Covid-19 struck, people would rush to get vitamin C. It helps in the cure of flu-like symptoms and ailments. Let us eat baobab fruits because they have vitamin C. We have seen groundnuts and these are helpful also as they have natural oils. I also saw matemba and these are rich in omega 3 while ishwa, crickets, majuru and madora are rich in proteins,” she said.

In yesterday’s competition, there were 20 participants, including seven chief’s wives, women from churches, women in business and the elderly. The wife to Chief Seke, Mrs Naume Chimanikire, who took the first position, prepared, among other dishes a unique dish that included pizza with toppings of different types of mushroom, mopani worms (madora or amacimbi), onions and cheese with the dough made from rapoko.

She prepared a cake with ingredients that included millet meal mixed with groundnuts, cowpeas and pumpkins. She also innovatively used jam prepared from African-horned cucumber to spread on the cake.

So interesting were her innovative displays that they included fresh juice from African horned cucumbers and hute and her husband, Chief Seke, who is diabetic, testified that the juice was helpful.

A contestant from Mutoko, Mrs Egnes Zinhu, who came out second, had dishes that included a traditional fruit cake where she used the syrup of boiled and pounded hacha (chakata).

She mixed the syrup with millet and cooked it like sadza and later moulded them into what they call chambwa. She said chambwa can last for a year without going bad. This is the same way wedding fruit cakes last long. 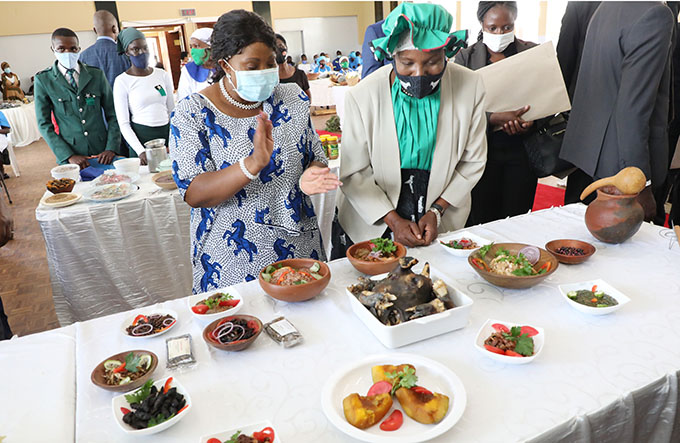 The contestants prepared food from their districts of origin.

There were various pumpkins that were prepared differently by boiling, roasting, frying and cut into fresh chips.

Some of the contestants also prepared baobab custard, granadilla juice, and baobab yoghurt.

The gourd of a baobab fruit is burnt to make utyora used in preparing pumpkin leaves or okra.

Mashonaland East Provincial Affairs and Devolution Minister Aplonia Munzverengwi prepared a variety of dishes as a way of appreciating the initiative and encouraging the nation to embrace traditional foods.

The head judge, Hopefay Hotel head chef Mr Tirivarombo Mutasa, told the First Lady that he learnt a lot about dishes he didn’t know which were prepared by the women and said he will introduce them at his hotel.

He was amazed by the cake and pizza prepared by Mai Chief Seke such that he was offering her a job to train him and other chefs how to prepare them. A female village head who was amongst the contestants said: “The First Lady is the one who taught us about traditional grains and made us to cook traditional foods for our families and this is where we are.

“When we go back to our communities we will encourage other women to prepare the dishes and share knowledge with them. We are so gratified by this programme which is restoring our health. I am over 60, but I am very healthy and not get sick frequently.”

She pleaded with the Ministry of Tourism and Hospitality Industry to help chiefs’ wives showcase traditional dishes whenever tourists come.

“In the olden days, people would not get sick and take long to heal, while diseases like cancer which are now common today were not there. Preparing and eating these foods helps preserve our health. We must protect our history and heritage and we must not do away with our traditional dishes. Chiefs’ wives let us encourage the consumption of traditional dishes in our communities. I hope these competitions will help change our mind-sets and view about traditional foods,” she said.

The mother of the nation implored people to preserve food for future consumption after the rainy season.