Nyamupinga fears for her life 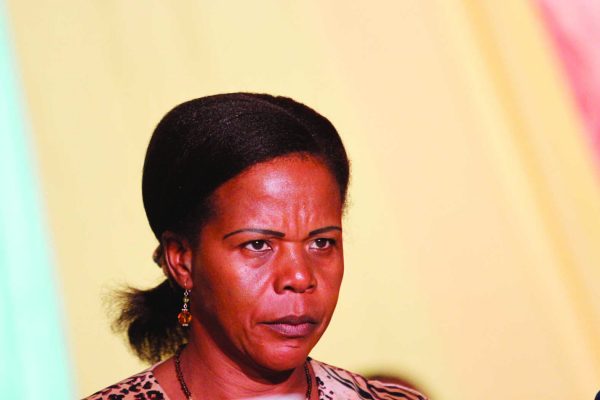 GOROMONZI West MP, Biata Nyamupinga (Zanu PF) has accused businessman and musician Energy Mutodi of wreaking havoc in her constituency, in an effort to elbow her out ahead of elections.

Nyamupinga, who is a women’s rights advocate, says she will fight to the end, as she wishes to retain the constituency. The following are excerpts of an interview between Nyamupinga (BN) and NewsDay senior Parliamentary Reporter, Veneranda Langa (ND)on this and other issues.

ND: Are you going to contest the forthcoming parliamentary elections, and under which party ticket given media reports that you are now a supporter of Ambrose Mutinhiri’s National Patriotic Front Party (NFP)?

BN: I am going to contest as a Zanu PF member. I am fully, and am 100% a Zanu PF supporter. There have been allegations that I am now supporting Mutinhiri’s NPF, but those reports are untrue. My name is being dropped because there are some people that want my constituency and are on a smear campaign to soil my name.

ND: Who are those people that have been troubling you?

BN: I am now failing to do my work as an MP because of Mutodi and Anderson Zhangazha, a Zanu PF central committee member, who is eyeing my constituency. Zhangazha is moving around with Mutodi, introducing him as a candidate and they have been threatening me. I now fear for my life.

ND: Given those threats are you still going to contest?

BN: I am not scared to contest them in the primaries because I believe in myself. I believe that they are taking advantage of the fact that I am a woman. They even told people at meetings that I am not allowed to campaign, but that is not going to deter me.

ND: What makes you confident that you can win the constituency again?

BN: I have worked with the people in the constituency for a long time. I have been using a bottom up approach, where it is the people that tell me what it is they want done. I do not impose things on people.

ND: What projects have you implemented in your constituency?

BN: I have promoted women in my constituency by building maternity waiting shelters. In ward 5, we are constructing a shelter and are electrifying it. In Munyawiri, we are also working on building a waiting mothers’ shelter and a bridge. I am one of the MPs, whose area has very good roads because all the time I have graders working on the roads. What I do is I get graders from Goromonzi Rural District Council as we have a good working relationship with the chief executive officer, Trust Madovi. I use my funds to put fuel on the graders. I have also worked with council to help vendors. In Munyawiri, we used dynamite to blast a boulder which was blocking the road and making it impassable. We are now working on putting a bridge between Munyawiri and Gamanya.

We also built a clinic in ward three with geysers. The clinic has 20 beds. Nineteen boreholes were sunk in different wards and we are in the process of sinking more.

ND: You are also an ardent women rights activist, during your chairpersonship of the Parliamentary Portfolio Committee on Women Affairs, what were your achievements?

BN: When I was the chairperson of the Zimbabwe Women Parliamentary Caucus, we fought for the 60 Proportional Representation seats to be included in the Constitution. We made a lot of noise on issues of gender-based violence (GBV). We have achieved reduction of cases of GBV, but some cases are still being reported and we need as women to continue the fight to ensure that the courts give stiffer sentences to offenders. We also worked a lot to ensure that the Registrar-General’s Office ensures women are served quickly whenever they want birth certificates for their children and identity documents. We also fought to have maternity user fees scrapped. We also did investigations on family planning, looking at traditional family planning methods, versus modern methods. We visited female prisons to see the conditions of female prisoners, but my term as chairperson ended as we were about to conclude the investigations and table a report in the House.

ND: As a legislator, what kind of motions did you introduce in the National Assembly?

ND: What does the PR quota system mean to you?

BN: To me, I feel that the PR quota system will deprive women from getting the 50/50 representation, which they aim for. I feel that for women to attain 50/50 gender representation in Parliament, we must demand that 105 seats must be for women only. What it means is that they should only be contested by women candidates only. We need to comply with the Constitution. If that cannot be done, at least the PR system must continue, but with 105 seats reserved for women.

ND: Are you at all affected by heckling in Parliament?

BN: There is a lot of patriarchy, and if a mistake is done by a male MP, there is no heckling, but there is a lot of heckling if it is a woman. However, now we have proactive men, who have assisted women to participate in Parliament. One of these men is the Speaker Jacob Mudenda, who has shown interest in promoting female MPs.