On the days of darkness in Zimbabwe

Source: On the days of darkness in Zimbabwe – The Zimbabwean 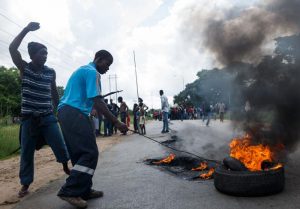 The Zimbabwe Human Rights NGO Forum (the Forum) has been following the developments of the past days since the national shutdown of January 14. It has noted with concern the massive human rights violations resulting in loss of life and destruction of property.

The Forum through its membership, has recorded at least 844 human rights violations during the shutdown. Consolidated statistics so far reveals the following violations: killings (at least 12); injuries from gunshots (at least 78), assault, torture, inhumane and degrading treatment including dog bites (at least 242), destruction of property including vandalism and looting (at least 46), arbitrary arrests and detentions (466), displacements (under verification). Other violations are invasion of privacy, obstruction of movement, media freedoms and access to information.

A comprehensive report providing the detailed analysis of the violations will be released soon.

The Forum notes with grave concern in particular the violation of the following rights and freedoms.

The Right to Peaceful Protest
While acknowledging that the right to peaceful protest is a constitutionally guaranteed right under sections 59 of the Constitution, the Forum condemns the behavior by some protestors who resorted to burning property, vandalism, looting and assaulting innocent civilians.

Excessive Use of Force and Extra-Judicial Killings

The Forum also condemns with greater disdain the disproportionate response by the state security forces. In particular, the random and indiscriminate use of live ammunition which has left 12 people dead and 78 people wounded from gunshots. There were reports received of police throwing teargas indiscriminately into people’s homes and market places where protests were not taking place. This continued use of lethal force is particularly worrisome, considering the nation is yet to recover from a similar catastrophic intervention of the 1st of August 2018.

Arbitrary Arrests, Detentions and the Right to a Fair Trial
The Forum also notes that at least 466 people were arrested in unlawful dragnet arrests. Of concern is the denial of access to lawyers, access to medical treatment, denial of bail, the fast tracking of trials without providing the arrested an opportunity to adequately prepare for their defence.  The Forum condemns the incidences of incommunicado detentions at military establishments and other illegal places of detention.

Security of Persons and Invasion of Privacy
The Forum has received disturbing reports of armed security personnel breaking into private homes of citizens, indiscriminately torturing occupants including children as young as 9 years old. Residents also reported that in the process, the armed security personnel looted groceries and money from their victims.  These incidencies were rampant in areas such as Mabvuku, Glen Norah, Highfields, Kuwadzana, Chitungwiza, Hatcliff, Domboshava, Budiriro, Warren Park and Chinhoyi. The Forum is concerned that the police are working in common purpose with the army and ZANU PF youth militia in perpetrating these violations.

Access to Information, Freedom of Expression and the Media
The Forum also condemns the internet blockade by the government through the unlawful warrant issued by the Minister of State in the President’s Office for National Security through the Director General of the President’s Department.  The directives are unwarranted, unjustifiable in the circumstances and is a tool of repression meant to mask the massive human rights violations which the state was preparing to commit. It is drastic and disproportionate and violates sections 61and 62 of the Constitution which guarantees freedom of expression, freedom of the media and access to information.  The Forum notes with concern that it was during this blockage there was an escalation of the violations which still continue undetected.

Attacks on Civil Society
It is regrettable that the government, instead of addressing the deepening economic crisis that has triggered the social unrest, it has resorted to blame shifting and unjustified attacks on civil society leaders whom it accuses of the chaos. Reports have been received of surveillance of civil society premises, homes of civil society members, attacks in the media and threats of de-registration by government. The Forum asserts that the work of civil society particularly human rights defenders is legitimate and must be protected.

While there is no official ‘state of emergency’ declared, the state of affairs represents a suspension of rule of law with the state arresting people without investigating them, torturing suspects and shooting civilians as well as suspending fundamental freedoms.

Recommendations
The Forum, concerned by this state of affairs calls on the following:

The President of Zimbabwe

The Forum will continue to monitor the situation.  If the recommendations here are ignored, the Forum will not hesitate to approach the courts and other entities to ensure that the above just demands are met.