Videos of brutal beatings of citizens by security personnel have gone viral on social media prompting an outcry by concerned individuals. 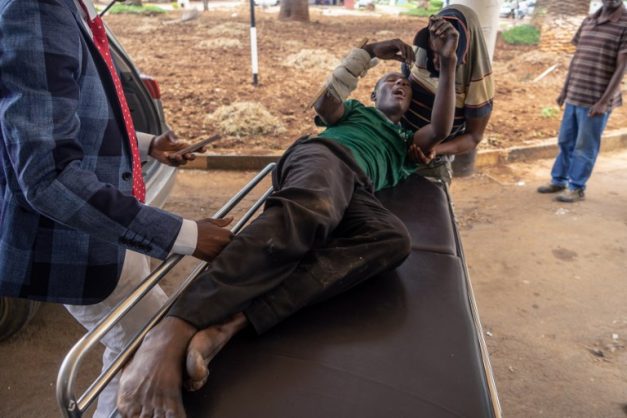 A man is loaded into a car after allegedly being assaulted by soldiers on January 16, 2019 in Sizinda township, Bulawayo, as Zimbabwe is swept by violent protests triggered by a sharp, sudden rise in fuel prices. – A wave of protest erupted in Zimbabwe on January 14, prompting a security crackdown in which at least five people were shot dead, Human Rights Watch said. The nationwide protests were triggered by the president’s move to double fuel prices at the weekend as the country’s economic crisis deepens. Zimbabwe’s mobile phone networks and internet were shut down for the second day on January 16. (Photo by ZINYANGE AUNTONY / AFP)

Videos of brutal beatings of citizens by security personnel have gone viral on social media prompting an outcry by concerned individuals.

Businessman Frank Buyanga, founder of African Medallion Group (AMG), on Friday announced  he had launched a humanitarian program to help victims of violence in Zimbabwe.

A brutal clampdown on Monday’s protests, which had originally been planned for three days, has left nine people dead and doctors in that country say as many as 68 people were treated for gunshot wounds. At least 17 of them needed emergency surgery.

The country-wide protests were sparked by astronomical fuel hikes – the highest in the world – announced over the weekend. A litre of petrol now costs up to R45. The government sent in the army to quell the protests. Authorities have also shut down the internet.

Videos of brutal beatings of citizens by security personnel have gone viral on social media prompting an outcry by concerned individuals, organisations, and countries.

Buyanga said he was deeply saddened by the violence that took place this week in the “beloved nation of Zimbabwe” and he was moved to do something to help.

Company spokesperson Estee Maman said: “AMG management has taken urgent steps to expedite [the] setting up of its humanitarian aid department. Our department is ready to assist those that have been affected by the violence.

“We urge those affected, those needing medical attention due to sustaining severe injuries, and those who have lost their loved ones and require burial assistance, to send an email to our humanitarian aid department which is on standby and ready to assist.”

Maman added: “We believe the entire community shares the same sentiments as AMG – the utmost yearning that peace prevails in the nation of Zimbabwe. AMG is strongly against the violence that occurred. It is in the same spirit that we urge the people of Zimbabwe to strive for peace and unity during these troubled times.”

Buyanga said AMG was looking for the woman who was shot in the legs by soldiers and had to be carried in a wheelbarrow to get medical help. She has become the face of riot victims in Zimbabwe. The company intends to offer her any assistance they may be able to render.

The violence in Zimbabwe has been condemned internationally with various bodies calling for peace and restraint.

On Thursday, the EU decried the disproportionate use of force by Zimbabwe authorities during protests in which people suffered gunshot wounds.

“The escalation of violence in Zimbabwe over recent days has been aggravated by the disproportionate use of force by security personnel,” said European Commission spokesperson Maja Komcijancic in a statement.

“We expect the government of Zimbabwe to uphold human rights and the rule of law, as enshrined in the constitution, and ensure due legal process for those detained.”

The EU also asked the government to “conduct a thorough investigation into the deaths and abuses over the last days”.

Buyanga, 38, who owns various successful companies, is not new to helping people and has spent much of the past few years supporting various humanitarian causes in South Africa and Zimbabwe.

Newer Post
Our govt has squandered immense goodwill: Mutasa
Older Post
On the days of darkness in Zimbabwe