Opposition accuses Britain of bias towards Mnangagwa in Zimbabwe election 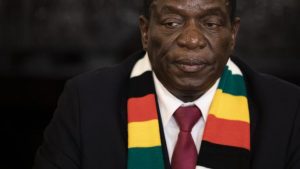 Britain’s ambassador to Zimbabwe has been forced to deny that she showed bias towards Emmerson Mnangagwa and mocked his presidential rival in the run-up to the landmark election that was marred by state-sponsored violence and claims of ballot-rigging.

Catriona Laing, who has been in Harare since 2014, has also been criticised for failing personally to condemn an army-led crackdown after last week’s disputed ballot. Six people were shot dead when soldiers opened fire on opposition protesters.

The Movement for Democratic Change (MDC) has claimed that scores of its supporters have been kidnapped, beaten and tortured since Mr Mnangagwa was declared the winner.

A senior MDC official described Ms Laing as “completely compromised” over what he said was her tacit backing of Mr Mnangagwa, who has the nickname “The Crocodile” and is linked to some of the worst atrocities of the Mugabe regime. “She seemed to think The Crocodile could be tamed, but he cannot be tamed,” he told The Times. “He is completely ruthless, worse in many ways than Mugabe. Perhaps she is now beginning to understand that. We hope the Foreign Office is a bit more realistic about this new junta than the ambassador has been.”

Kate Hoey, the Labour MP who travelled to Zimbabwe for the election as an international observer, filed a report saying that she had been present when Ms Laing was “openly ridiculing” Nelson Chamisa, the MDC leader, before a dinner in the capital.

Ms Hoey added: “We were disappointed at how every element of civil society and politicians outside Zanu (PF) [the ruling party] had the belief that the UK embassy — and in particular the ambassador — is biased in favour of the incumbent regime.”

The ambassador’s office has been consistently accused of favouring Mr Mnangagwa, 75, as Britain’s preferred successor to Robert Mugabe, 94, even before the despot was ousted in a soft coup last November.

When Ms Laing shared a photograph of herself outside No 10 wearing a scarf in the colours of Zimbabwe — echoing Mr Mnangagwa’s signature look — the Zanu (PF) leader was among the first to retweet the image and respond on Twitter, assuring her that Zimbabwe’s prospects were “as bright and positive as your wonderful scarf”.

Ms Laing, who was a development specialist before joining the Foreign Office six years ago, has called the observations by Ms Hoey “untrue”.

She tweeted: “I certainly did not ridicule @nelsonchamisa, who I recognise as a major political figure in Zimbabwe. I believe he and I have a good relationship and we meet regularly.”

In May Mr Chamisa expressed his concern “for a disturbing trend” that the UK’s representative in Harare was inclined “to align with one political party against another”.

Welshman Ncube, the MDC spokesman, also suggested that some western governments, including Britain, had given their tacit approval before the move against Mr Mugabe that was orchestrated by Mr Mnangagwa, who was in exile in South Africa at the time. “There is sufficient evidence that these countries participated in the coup in November. We think they should stop interfering, given the role they played in the transfer of power last year,” he said.

A senior MDC source added: “We have received reports that [Ms Laing] has mocked our party leader’s ideas on many occasions, for example his promise of a bullet train to link the two cities of our country.

“She has made fun of his ambitions and been very quick to speculate on allegations about where he is getting his funding from, including from Israel and the Mugabes.”

Newer Post
UK ambassador to Zimbabwe sparks controversy by wearing trademark scarf of President Mnangagwa
Older Post
Like many Zimbabweans, I was disappointed by the election – but there is hope