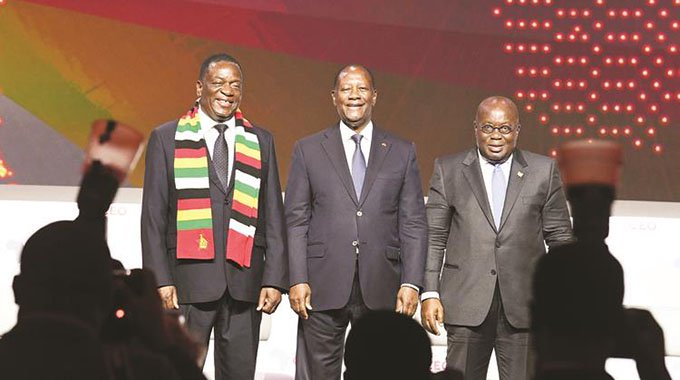 The peaceful transition saw former president Robert Mugabe resigning after he failed to deal with criminals that had usurped Executive powers.

“It was a peaceful process and we pride in that as Africans,” President Ouattara said.

“I also want to thank you for the care and the treatment you have given to former president Mugabe. It’s rare in such cases that one is given good treatment thereafter. I am glad you are now open for business in an effort to tackle the challenges of the past. We are all nationalists, but it’s now time to open our economies.”

He added: “President Mnangagwa has indicated that Zimbabwe is going for elections which will be free and fair and I wish you all the best such that you continue with your vision which will benefit Zimbabweans.”

He said African leaders should now focus on “economic nationalism”.

“This can only be achieved if at the highest level we integrate, discuss, dialogue and share experiences.

“Two or three decades ago, the thrust was political nationalism, but today after the rest of Africa has become independent, I think it is necessary that the current crop of African leaders should now focus on economic nationalism and integration of our economies.”

“Me and my delegation are very happy to have accepted an invitation to attend the CEO Forum,” he said.

“Initially, I was doubtful as to whether I should attend or not, but I felt if I did not, I will be misunderstood by my peers. I am happy that fear has benefited me, we gained a lot.

“It was an opportunity for us to interact with chief executives from the continent and beyond. I didn’t know that Cote d’Ivoire had developed so much. It’s a pride for us Africans.”

Zimbabwe, he said, had a lot to do to be at par with other nations.

“A country like Zimbabwe which is 18 years behind the rest of Africa, in our bid to catch up, has to leapfrog in every aspect.”