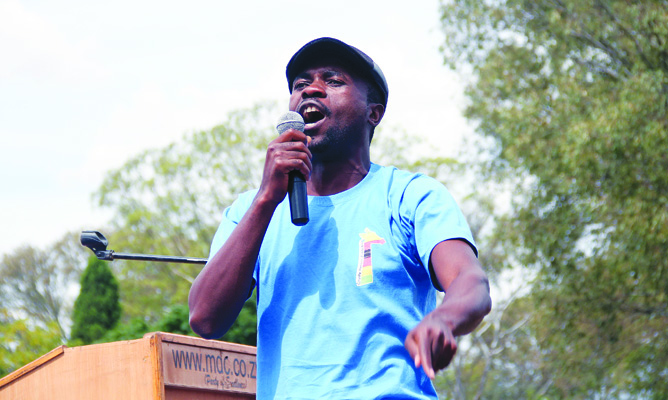 The MDC-T has accused the police of playing politics on the disappearance of political activist Itai Dzamara, who is believed to have been abducted by State security agents three years ago.

MDC-T secretary-general Douglas Mwonzora said, while the party would want Dzamara to be brought back safe and alive, they were disappointed by police’s seemingly lackadaisical approach to the matter.

“They are not serious, that is political posturing ahead of the elections, because after three years and court interventions they all of a sudden wake up to appeal for public help on a matter that they know about,” he said.

“Where the police and State security agents are involved, you see by the absence of arrests, three years down the line, when all tracks have gone cold there was not even a single arrest of a suspect, even a phoney one,” he said.

This came hard on the heels of a statement by police spokesperson Senior Assistant Commissioner Charity Charamba, where she appealed for public help to put closure to Dzamara’s case.

A former police officer who spoke to NewsDay on condition of anonymity blasted police for pussy footing over the matter, saying if they were committed they would by now have picked up the suspects and vehicle used in the alleged abduction of the activist.

Dzamara’s younger brother, Patson, also said he was angry over police delays in concluding investigations into the issue.

“I was shocked yesterday to learn about the statement by ZRP asking for help to find Itai three years after his abduction. It is over a year since the last time there was an engagement between us and ZRP. How they are trying to trivialise this matter in order to present a reformed face is not only repugnant, it’s preposterous. It’s not only nonsensical but diabolic for the people who abducted my brother to be asking Zimbabweans to assist them with answers,” he said.

Dzamara said he tried to get former President Robert Mugabe and even President Emmerson Mnangagwa for his brother’s release but to no avail.

“From the onset, I never minced my words regarding who abducted Itai. That satanic act was executed by the military intelligence under the oversight of Zanu PF. Not only that, up until now, these are the same people who have egregiously stonewalled me (us) every time I (we) tried to engage them about this issue. We tried to engage Mugabe and his government to no avail. From the time Mnangagwa snatched power from Mugabe, I wrote him two letters seeking for a platform to engage. Not once did I get a response,” he said.

Crisis in Zimbabwe Coalition (CiZC) said it has to be noted that since Dzamara’s disappearance, the ZRP has been frustrating efforts by pro-democracy groups in search of the missing human rights activist.

CiZC said as a result, there were a series of arrests and assaults of the concerned individuals by the law enforcement agents.

“To make matters worse, the ZRP went on to defy a High Court order to search for the missing activist and give regular updates to Parliament and former President, Robert Mugabe’s spokesperson, George Charamba event went on to state that the former Head of State was too busy to be occupied with the issue of Dzamara,” the grouping said.