‘Out with the old: youth must rise’ – Zimbabwe Vigil Diary 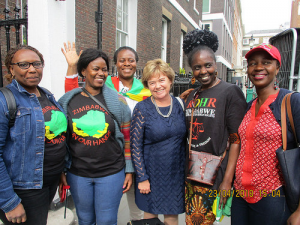 Vigil activists outside Chatham House with British Ambassador to Zimbabwe

Campaigning outside Zimbabwe House on a chilly, overcast day was no compensation for missing Thomas Mapfumo’s Saturday concert at Glamis Stadium in Harare – his first home gig for 17 years.

What was a compensation, however, was the typically forthright interview he gave to the Daily News in which he dismissed the presidential transition from M to M as ‘cosmetic changes’ and called on young people to ‘rise and stand up’ to claim their country.

Mapfumo added that it was impossible for the current leaders, in the twilight of their careers, to clear up the mess they had created in nearly four decades. ‘After 14 years away in the US, I come back to see people living in squalor, people are selling anything on the street and everywhere there are potholes. Amidst the poverty, you have others smartly dressed in suits and driving beautiful cars,’ he said. (See: https://www.zimbabwesituation.com/news/mapfumo-blasts-ed-government/).

‘Cosmetic changes’ is the message the Vigil gets from family and friends in Zimbabwe. Nothing has improved except the banditry of police road blocks which even the Zanu PF government realized was deterring tourism and prospective investors. The MDC MP Eddie Cross points out that, despite the promises of the new regime, ‘not a single significant case of corruption has been initiated’.

He goes on: ‘The Army may be back in the barracks but believe me their control over most of what is going on in Government has not changed at all, in fact it may be more open and pervasive. We are headed for a “smart election”, not free and fair in the conventional sense but one which will be controlled and directed by the same team that won the 2013 elections. Its outcome is being predicted with total certainty as being a two-horse race with Emmerson Mnangagwa the clear winner, Nelson Chamisa a close second and the also rans miles behind.

‘But I think they will be able to claim after the election that the “people have spoken”. The fact that they had their hands tied behind their backs, were subjected to a constant steam of propaganda and their basic needs delivered on a “command basis” by the military in mufti, will be very difficult to see and the international Community will begin to recognise the new regime once it takes over.’  (see: http://www.eddiecross.africanherd.com/180426.html).