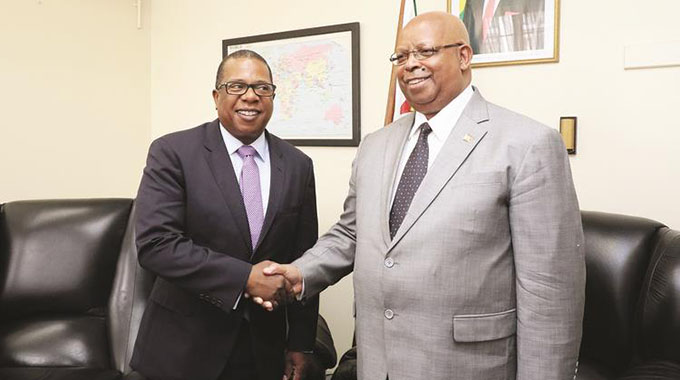 Farirai Machivenyika Senior Reporter
Parliament is working hard to ensure the fulfilment of the legislative agenda set by President Mnangagwa when he delivered his State of the Nation Address in September. This was said by Speaker of the National Assembly Advocate Jacob Mudenda after meeting US Ambassador to Zimbabwe Mr Brian Nichols at Parliament Building yesterday.

“As far as economic reforms are concerned we have indicated to the ambassador that we have started the process through the administration of Parliament to ensure that the pieces of legislation which were proposed by His Excellency the President during his State of the Nation Address are pursued with vigour and vitality to ensure that the legislative process and the agenda is consummated within the next few months so that we create the ease of doing business in Zimbabwe in order to attract both domestic and Foreign Direct Investment,” Advocate Mudenda said.

He told the US ambassador that Parliament was committed to amend electoral and media laws to enhance democratic practices in the country.

“Any electoral reforms that need to take place will have to take place through parliamentary processes, for example the question of POSA. The Constitutional Court has already ruled that Section 27 of POSA which seems to offend the free assembly of people is unconstitutional, so Parliament has no choice but to amend that section.

“We are also working with the Ministry of Information so that those sections of AIPPA that offend the provisions of the Constitution are also dealt with,” Advocate Mudenda added. Ambassador Nichols commended the Government’s moves to embark on substantial reforms.

“We had a very comprehensive conversation about the full range of issues affecting our bilateral relationship and Zimbabwe’s reform agenda,” Mr Nichols said.

“The proposed reforms and legislation are very bold and hopefully will move quickly. Particularly, we discussed modification to laws like POSA and AIPPA and doing business reforms which are progressing in Parliament and we also discussed US assistance to Zimbabwe including to the Parliament of Zimbabwe and our cooperation going forward.

“The rhetoric and the proposals from this Government have been wonderful but what we need to see is concrete action and Parliament is where those actions take place.”

The US ambassador said the implementation of the reforms would have a bearing on the removal of sanctions on Zimbabwe that have caused untold suffering among ordinary Zimbabweans.

“Those reforms are moving forward here in Parliament and the honourable Speaker has told me and we hope to see those enacted and that will affect the changes that we will consider positive and allows us to move forward,” he said.