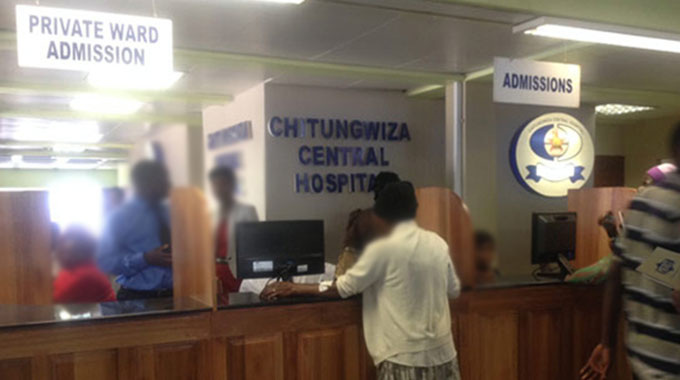 Paidamoyo Chipunza and Sibongile Maruta
There was chaos at Chitungwiza Central Hospital yesterday as patients manhandled striking nurses, demanding that they be attended to since they had paid consultation fees.

Nurses embarked on a nationwide strike yesterday demanding rationalisation of their salaries, which they claim were less than those of general hands.

They also want Government to honour its commitment to pay them other allowances.

One of the patients who spoke to The Herald yesterday, Mr Revai Mushumi (35), said they were not pleased that the hospital staff were sending people back home, yet they were receiving consultation fees.

“The hospital is collecting our money and after payment that is when you are told that nurses are not working today,” he said.

“It is unfair, that is why we are fighting them. There are people in Ward 4 with serious medical conditions and those people are not being attended to.”

An elderly patient who spoke on condition of anonymity demanded to see the hospital management to express her anger over the strike, without success.

“People do not know how difficult it is to get this money that we have used to come here and pay for consultation, yet we fail to get the service,” she said.

Chitungwiza Residents Trust representative Ms Alice Kuvheya, who was also at the hospital, said an intervention was needed quickly, considering that there was a cholera outbreak in the town.

“We are worried as residents that nurses have downed tools at a time Harare and Chitungwiza are experiencing a cholera outbreak,” she said.

“We implore responsible authorities to urgently attend to this crisis which can potentially lead to unnecessary loss of lives.”

When the Herald visited the hospital departments yesterday, no patients were being attended to, with nurses seen sitting and chatting in one of the rooms.

The situation was the same at Parirenyatwa and Harare hospitals.

He blamed the Health Services Board for the discrepancies, saying some general hands were now earning up to $720 a month in on call allowance, yet nurses were given just $210 as night duty allowance.

“We want these discrepancies to be sorted out,” said Mr Dongo.

Mr Dongo said Government should honour its commitment from last month’s agreement of paying nurses the revised on call, post basic and stand by allowances.

Efforts to get a comment from either Ministry of Health and Child Care or the Health Services Board were fruitless yesterday.