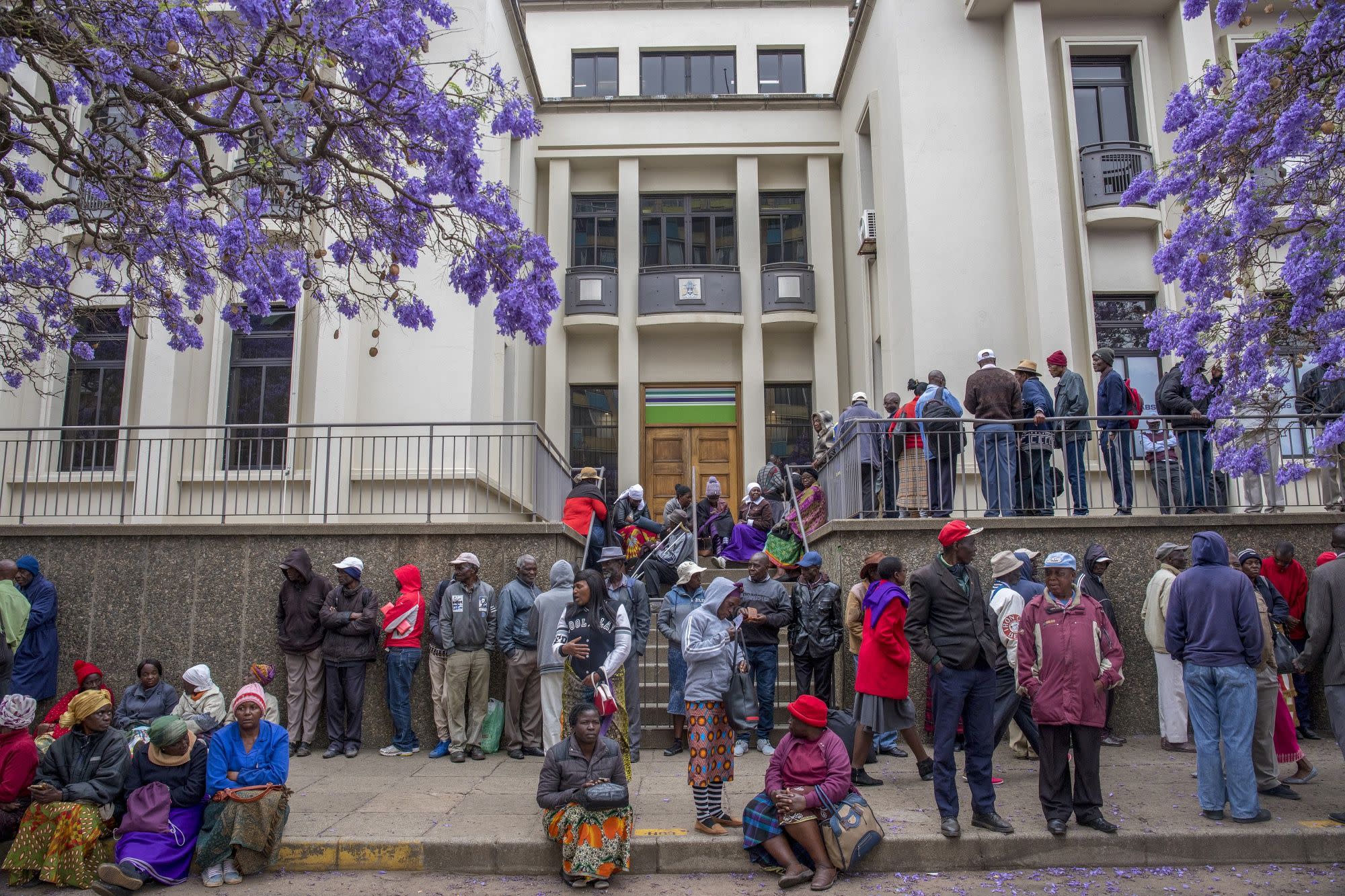 (Bloomberg) — As hundreds of pensioners line up outside a bank in central Harare in the hope of collecting their pensions, military veteran Elias Nyabunzi has a sense that he has seen this all before.

If there is cash available, he will collect the equivalent of just $26, down from the $400 he was getting a few months back. A decade ago when he went to collect the lump sum he was also entitled to after 25 years in the army he was given just $1. The rest had been eaten away by hyperinflation, he was told.

“It buys nothing,” the 62 year-old says of the pension as he stands under a purple blossomed jacaranda tree wearing a faded England tracksuit.

Pensioners in Zimbabwe, who are estimated to number about 500,000, are among the hardest hit in an economy that’s stagnated for almost 20 years, a result of a botched land reform program and a profligate central bank printing press. Abrupt changes in the currency system have wiped out savings twice in a decade and, according to the government, the economy has halved in size. While pensioners have little choice, in total about a quarter of the population of 16 million has left.

This June the authorities suddenly banned the use of foreign currencies and reintroduced the Zimbabwe dollar, which has since plunged 59% against the U.S. dollar. That’s a problem in a country where almost everything is imported.

In 2009 the opposite happened when the Zimbabwe dollar was abolished after a bout of hyperinflation.

Now, many pensioners have had to sell their assets, take in lodgers or depend on remittances from their children, who’ve emigrated to find work.

Those with no other financial lifeline live from hand to mouth.

“I live like a destitute,” says Patrick Nyanhewe, 78, a former waiter who spent 36 years at the country’s leading hotels, and cant afford to pay for essential medical equipment.

He has asked a lobby group, the Zimbabwe Pension and Insurance Rights Trust, to fight for what he believes he is due.

The group estimates that the national pension industry is worth $22 billion. The Insurance and Pensions Commission, the industry regulator, says its worth about a third of that. The commission didn’t immediately respond to a request for comment.

It is “to justify the low benefits that they are paying through understating the size of the industry,” Martin Tarusenga, ZIMPIRTs general manager, said in an interview from his office in Harare’s city center.

Currency changes and an inflation rate that was estimated at 300% by the International Monetary Fund in August, aren’t the only threats to pension value, says Tarusenga. The pension industry is riddled with poor management, use of improper accounting methods and a lack of proper record keeping, he added.

The pension trust has sued the government over its decision to halt the publication of annual inflation figures and has objected to the value of the pensions being switched to Zimbabwe dollars from the U.S. currency.

Tarusenga’s comments jar with those of national president Emmerson Mnangagwa.

In a televised state of the nation address on Oct. 1, Mnangagwa promised that parliament would pass the Pension and Provident Funds Bill.

“It is designed to ensure compliance with international standards,” he said. “The ultimate objective is to protect policyholders and pensioners so that they fully enjoy their rights and benefits.”

That’s cold comfort for Morgan Moyo, who fought as a guerrilla in Zimbabwe’s liberation war in the 1970s and later served in the army.

“We never thought that we would be suffering like this,” the 65-year-old said. “If you see a person who looks destitute, hungry and with worn-out shoes and clothes, you know that it’s a pensioner.”

He and Nyabunzi were among those lining up in the early hours of the morning outside a branch of the Central African Building Society where elderly women huddle under blankets before the 8 a.m. opening of the bank.

When the doors open Elizabeth Msengwa, the branch manager, breaks the news that cash is in short supply. Only the first 500 in the line will be handed numbered cards by the bank’s security guards, and given Z$80, the equivalent of just over $5, mostly in coins.

“We have to try and make sure everyone gets something,” she says.

(Adds inability to pay for medical equipment in ninth paragraph)

To contact the reporter on this story: Ray Ndlovu in Johannesburg at rndlovu1@bloomberg.net

To contact the editors responsible for this story: Gordon Bell at gbell16@bloomberg.net, Antony Sguazzin, Karl Maier