‘The people are free’: Zimbabweans react to the fall of Robert Mugabe

The news came at 5.30pm, as Zimbabwe’s MPs and senators debated a motion to impeach their president in the conference hall of a five-star hotel in Harare.

Helton Bonongwe, the minister for parliamentary affairs, approached the stage holding a sheet of paper in his hand. There was a moment of silence, and then the hall erupted. After 37 years in power, Robert Mugabe had resigned.

The cheers spread in concentric waves, through the 400 MPs and senators, out into the Rainbow Towers hotel’s reception and bars, through the drivers waiting in the MPs’ luxury SUVs, and on to the streets of Harare, where people sang and whistled and danced in a massive shout of relief and joy.

Some shouted political slogans, calling for the appointment of Emmerson Mnangagwa, the vice-president whose sacking two weeks ago triggered the crisis that led to the end of Mugabe’s rule. But most simply voiced their excitement and, above all, their hope.

“I never thought it would happen so soon,” said Nancy Thembi, a 21-year-old student on secondment to the hotel who danced as she heard the news. “Everyone is calling it a new era. It is history in the making. The people are free.” Thembi, like so many in this youthful nation, had never known any other leader than Mugabe.

“Change is good,” said 25-year-old Phionah Kusere, a receptionist who conscientiously continued to check guests in despite the chaos around her because, she explained: “I am a Zimbabwean so I work hard.”

In the halls of the Rainbow Towers – a kitsch hotel, casino and conference centre with marbled floors and a brass spiral staircase – opposition politicians embraced government loyalists who have long been bitter enemies.

“It is an example to the rest of Africa. To follow our route, of engagement, unity and the rule of law,” said David Chapfika, a veteran MP from the ruling Zanu-PF party.

Mike Carter, a senator from the Movement of Democratic Change (MDC), the brutally suppressed main opposition party, said the moment was “wonderful”. 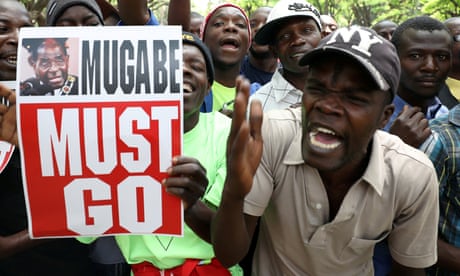 “This is what we have been struggling for for 25 years,” he said.

Much of the anger of the past week has been directed not at 93-year-old Mugabe, who maintains his reputation as a liberation hero across much of the continent as well as at home, but at his wife, Grace.

“He was my leader and will always be my leader. He was my father and my friend. But that woman was his problem,” said Matanga Takamurumbira, a 75-year-old veteran of the brutal bush wars of the 1960s and 1970s that won Zimbabwe its independence and ended rule by a white supremacist regime.

Soldiers, long feared and reviled, were surrounded by cheering crowds. A couple sat with their toddler on an armoured vehicle, posing for photographs.

“The joy I feel is for my son. This is a new sunrise in Zimbabwe. He has a new future,” said Avril Chimesa, 31.

Trevor Ryamuzihwa, an IT consultant, had just bought a round of drinks at a central Harare bar. He was born in 1980, the year Mugabe took power. “It is bittersweet. We still respect what he did. But he should have retired 15 years ago. It would be wrong to go after him, to prosecute or something. He’s 93 years old. Let him rest,” Ryamuzihwa said.

As for the first lady, Ryamuzihwa said: “That’s a different story. She should pay back the money. She should go to jail.”

The barman apologised to another client that the beer was not cold. The response was quick: “Just give me the bottles. We have been drinking warm beer for 37 years. No one is going to sleep tonight.”

In Epworth, one of the poorest neighbourhoods of Harare, the news brought people out on to the streets for impromptu barbecues. Cheap Scuds beer fuelled the celebrations. Here there was less respect for the former president.

“We don’t care what happens next,” said Blessing Nyathi, 37, whose husband, a veteran of the liberation war, died 10 years ago, leaving her six children to bring up on her own.

“Anything has got to be better than before. [Mugabe] gave us nothing but promises and words. The children were suffering. No one tended the grave of my husband. I get a worthless pension. We are hungry. They say respect him but I say curse him.”

Zimbabwe’s economy is close to collapse. Its currency is worthless. Millions live in the deepest poverty. Its once admired infrastructure lies largely in ruins. There are deep social and political divides.

For now, the ruling Zanu-PF remains in power and may even have been emboldened by the events of the last week. Mnangagwa, who may be sworn is an interim president on Wednesday, was Mugabe’s ruthless righthand man. There are concerns that coming elections won’t be held, or will be rigged.

“We embrace [Mnangagwa] because he symbolises change but he has been part of the system for 37 years so what change can he bring?” said Clement Nlizeyo, a 33-year-old politics researcher who was watching the impeachment proceedings

But for the most part the crowds that thronged the streets of Harare, Bulawayo, Masvingo, and elsewhere were not worrying about the future.

“He has gone and I am so happy. We have been waiting for this for 37 years. I feel a great excitement,” said Bacillia Makhaya, an MDC representative of Mashonaland central as she watched the scenes of jubilation with her friend, fellow MDC MP Josephine Chithembwe, 65. “We know there are challenges ahead and difficulties to come. But now we will celebrate.” – The Guardian