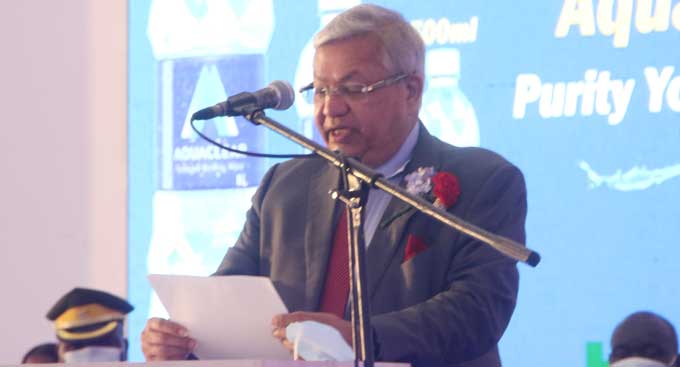 ZIMBABWE’S fastest growing beverages maker, Varun Beverages, says it plans to grow its domestic operation into a group of companies worth US$500 million, as it responds to growing demand for its soft drink brands.

The strategy announced by chief executive officer (CEO), Vijay Kumar Bahl last week, gives the business impetus to extend its growing influence in the southern African country, where it has shaken the status quo within four years.

Varun produces a range of soft drink brands under the PepsiCo franchise in Zimbabwe, and is majority controlled by billionaire Indian tycoon, Ravi Jaipuria.

Bahl, who spoke during the Zimbabwe-Rwanda investment conference in Harare, said Varun had so far injected about US$80 million into modern beverage production technologies, and exponential demand, along with an improved investment climate had given it confidence to inject more resources.

Varun came onto the scene during the period of dramatic political transition in Zimbabwe, with President Emmerson Mnangagwa’s administration making serious investment policy shifts under the ‘Zimbabwe is Open  for Business’ mantra, after assuming office in 2017.

The Varun CEO said his expansion strategy was testimony to the changes.

The firm’s first locally produced products came into the market in February 2018.

“As an Indian investor, I can tell all of you from my own experience that Zimbabwe’s ‘Open for Business’ (mantra) is not just a dialogue,” Kumar Bahl said.

“It is a reality and as an Indian investor, CEO and shareholder, I can tell you that this US$75 million to US$80 million (that we have invested) is just a start of business here. We have a vision to create a group of companies in Zimbabwe. This should not be less than US$500 million,” the Varun CEO said.

Varun’s aggressive market penetration pricing has been credited for maintaining beverage prices fairly stable in Zimbabwe, where a decades — long monopolies priced as they saw fit.

The 7UP and Mirinda brands maker has been leveraging on its special economic zone (SEZ) designation to expand the business.

Firms licensed by SEZ enjoy a string of benefits that help them manage costs.

The company’s SEZ designation is set to expire next year in February.

The firm is currently investing US$20 million for additional lines, which will be launched by President Emmerson Mnangagwa “very soon”.

“We are setting up two more production lines to take the total production capacity to 76 million bottles and cans per month,” he said.

Bahl said the firm, had also set up a plastic ware plant.

The billionaire flew into Harare in October last year to commission new production assets, after which he indicated that more resources were on the way.

“We want to expand into juices,” said Jaipuria, who spoke to Standardbusiness after the commissioning.

“But as you can see, there is no more space left. We want to do more backward integration and we are running out of capacity here. As I said we are going to put up a juice line and we would require land for that. It depends with how fast government it going to give us land. We have already announced between US$10 million and US$15 million investment for next year (2022). I think by the end of 2023 we will be able to do what we are saying,” Jaipuria said.