The sight of an electric car in Zimbabwe has caused a stir on social media, as fuel shortages cause agony for many. 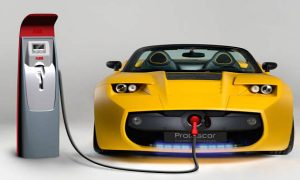 The sight of an electric car in Zimbabwe has caused a stir on social media, as fuel shortages cause agony for many.

Ironically, the white saloon is pictured on the back of a recovery vehicle, but that didn’t stop Zimbabweans being in awe of a car that can skip the long queues for petrol and diesel that resurfaced this month.

“Wow… someone owns a Tesla in Zim,” wrote South-Africa-based Zimbabwean @_jimalo_ on Twitter.

But others wondered if the owner of the car, whose identity is not known, was simply trading one problem in for another. Zimbabwe’s electricity supplies are erratic, especially in the rainy season.

Wrote @rickinzim: “Looks like it’s broken down already, no diesel for generator to charge the car.”

To some, the Tesla showed that economic opportunities still exist in Zimbabwe. “Whilst the rest of us are bickering complaining and being negative others are making money,” wrote @MariraMunya.

Earlier this month a Bugatti Veyron, believed to be worth more than $2 million, was pictured being offloaded at Robert Gabriel Mugabe International Airport. The supercar is thought to belong to a prominent Zimbabwean businessman.

Commenting on the Tesla, former education minister David Coltart asked where in foreign-currency starved Zimbabwe the money was found to import a car when others can’t find foreign currency to buy medicine for their children.

“I suppose at least it wasn’t a Bugatti,” he tweeted.

Me: Someone now owns a Tesla in Zimbabwe, behold the very first electric vehicle ? in the country.

NocZim: thought he would run away from me but nemanetsero anoita magetsi he will come ne #JerryCan to buy fuel ⛽for generator ???

Someone got a @Tesla in Zimbabwe, if only #Tesla @elonmusk could see how much of interest Africa has in their cars, people are willing to pay a lot to get them. Plus I hear there’s shortage of diesel and petrol in the country. @InsideEVs @transportevolve https://t.co/nIcA93IBTQ pic.twitter.com/jFGh6mJDku

While you were queuing for fuel, somebody has imported an electric-powered Tesla Model X into Zimbabwe.