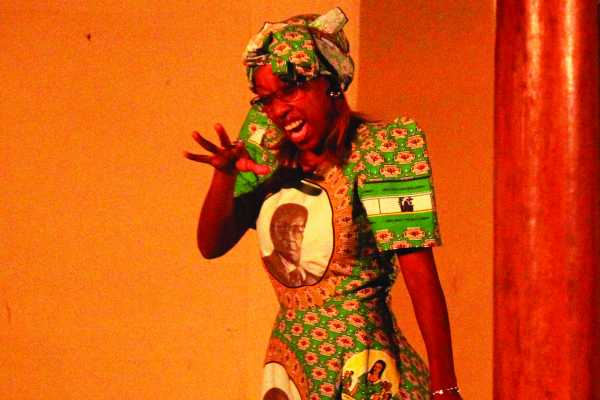 OPERATION Restore Regasi, the theatre piece by Charles Munganasa capturing the dramatic ouster of former President Robert Mugabe last year, has captured the imagination of theatre lovers and has been oversubscribed, wherever, it has been staged.

One of the actresses who has attracted a lot of interest because of her almost textbook perfect portrayal of former First Lady, Grace Mugabe, is Carol Magenga (CM).

NewsDay Life & Style Correspondent Tafadzwa Kachiko (ND) recently tracked down the actress — who is currently on a nationwide tour with the rest of the cast and crew — and spoke at length about her acting career and role in the play, which has since been staged in Masvingo, Harare and Zvishavane and will also be shown in Gweru and Bulawayo. Below are the excerpts from the interview…

ND: How did you land the role of Grace Mugabe in the play?

CM: I received a notification for auditions. It took me quite long to decide but eventually I said to myself let me give it a try. After showing my interest to the playwright Charles Munganasa, I was contacted after a week. That, however, came as a surprise, I couldn’t believe it. So that’s how it all started.

ND: What were your first thoughts? Did you think you would pull it off?

CM: I did not want to take the role. This was because it’s such a challenging role especially given that the character is known very well by Zimbabweans and some people beyond. They know her erratic behaviour and how she spoke so I saw assuming such role as a huge challenge. When I finally made my decision I did not regret.

ND:Did you first have to watch video clips of the real Grace Mugabe to study her?

CM: Yes, I watched dozens and dozens of clips to understand her better. The fortunate thing was that most of her speeches and public addresses were recorded by the media, so I had a lot of content at my disposal.

ND: Share with us the rehearsal processes? Were there any slips? How long did it take to finally nail it?

CM: There is no room for mistakes when staging, so rehearsals were continuously tough. In the beginning there were numerous slips. It was hard to memorise the script because it’s a bit long. It was also not easy to get into Grace’s character, her moves, tone variations and working in sync with other actors.

However, after every mistake, I aimed to raise the bar higher than in previous performances. That’s unlike in film where an actor can make a mistake and the director says “cut” and until the production is perfected.

Rehearsals are a longer process and our director had his work cut out for him so after three weeks, we were close to perfection.

ND: Were the words you used exactly the ones on the script or there was room to improvise?

CM: Mostly it was word to word, but we were given significant room to play around with the script in line with our understanding of the characters. Thus, here and there, we could customise.

ND: The political nature of the play itself could have scared off another person. Did you have any second thoughts about participating in it?

CM: I was indeed scared and worried because previously, it was terrifying to criticise anything about former President Robert Mugabe. I feared the possible reaction of the current government and that of the audience.

ND: Would you say this is probably the biggest play in which you have featured, and why?

CM: Yes, I can safely say that because of all the productions I have been part of, Operation Restore Regasi has drawn massive attention both locally and globally. It has literally gone viral and received coverage from the local and international media.

ND: When and how did you become involved with theatre?

CM: I started acting at Victoria Primary School in Masvingo and carried on during my high school acting in various festivals till I joined the Charles Austin Theatre and Arts Club in 2010.

ND: Is this your full-time occupation?

CM: Initially I was only doing acting on a part-time basis, but since embarking on this project, I considered taking it seriously.

ND: What have been the sentiments of your loved ones regarding your role in this particular play?

CM: There were mixed emotions due the play’s political nature. I am thankful that my parents and my older sisters eventually supported my ambitions and kept on encouraging me.

ND: Would you say this is an inborn talent, or professional training?

CM: I would like to believe that God blessed me with the talent and gave me that passion for acting. I have received a bit of training to nurture the talent.

ND: What is your general overview of the theatre industry in Zimbabwe?

CM: It is making strides but a lot still needs to be done in terms of cultivating a culture of theatre appreciation and understanding in our society.

There is also need to commercialise it so that it can be a source of income and respected like any other profession. I feel the biggest challenge probably is lack of funding for projects. It’s saddening to note most of our theatres are rundown and not being maintained.

ND: Have you scooped any accolades along the way?

CM: I have scooped awards in a few festivals I have been part of, particularly one-act festivals. I scooped most of them at high school and with the Charles Austin theatre I won the Best Actress Award during a one-act festival held in Kadoma.

ND: Away from acting, what else do you do?

CM: I have a professional qualification as journalist, which I attained at Midlands State University, so apart from acting, I occasionally write for an online publication, Sunrise News.

ND: Who has been your greatest inspiration?

CM: My mother, she is the biggest go getter and fearless person I know.