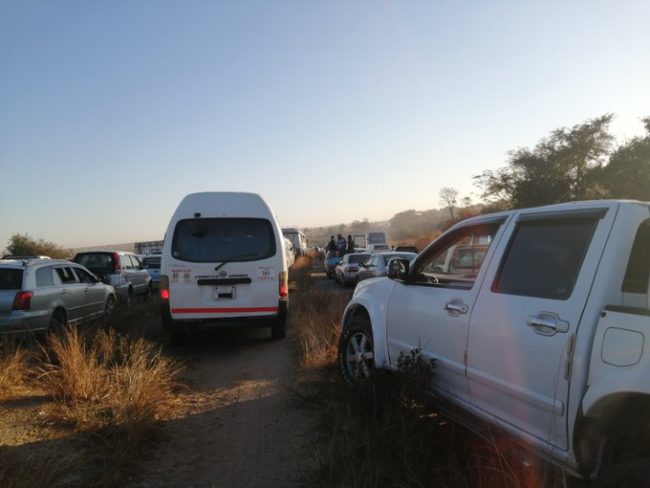 TRAVELLERS who were traveling to and from Chitungwiza this morning felt the heat as police officers who were mounting roadblocks demanded exemption letters from them.

The roadblocks were mounted just after and before bridges that cross Hunyani River along Seke Road and Chitungwiza (Machipisa) Road respectively.

This was despite government’s clarification that exemption letters would only be asked during curfew hours.

A traveller who was getting into Chitungwiza for work from Machipisa told NewsDay that the situation made him arrive at work at midday.

“I arrived at work at around 12. Can you imagine? It was not easy to pass through the roadblocks. The police (some of high ranking positions) were asking exemption letters and some people were  unfortunately turned back home. It was easy for those who opted to walk.I have a feeling that there are other people who were late to work,” said a traveler who identified himself as Enoch.

“I am still thinking whether I should go to work or not because it’s pointless to arrive after 12.”

Another one who identified himself as Tafadzwa who was going to town said, “The situation was very frustrating. Some people were confused on wether  the police wanted exemption letters or Vaccination Cards and simply turned back.”

Some people reportedly walked from Hunyani Bridge to Unit L.

Those travelling on Zupco busses were also spared.

National police spokesperson Assistant Commissioner Paul Nyathi said he was unaware of the operation, but warned citizens against unnecessary movements to decongest roads.

“I need to find out with the Harare Command what was happening taking into cognisance  that we are under Level 4 lockdown.  We ned to balance  the movement of people and the enforcement of COVID-19 regulations.  The police  are enforcing  COVID-19 Level 4 regulations as pronounced  by President  Emmerson Mnangagwa on June 29,” he said.

“We want to appeal to the public to  plan their journeys  because it’s not everyone who is driving  to the CBD for work. There are some  going to town to just roam around. At  the end of the day you tend to wonder if they are really conscious  about the impact of COVID-19. So there is need to strike a balance. We will  engage the Harare Command to take cognisance of the Level 4 regulations. We want to appeal to the public  to not congest the roads by travelling  for  the sake of travelling.”