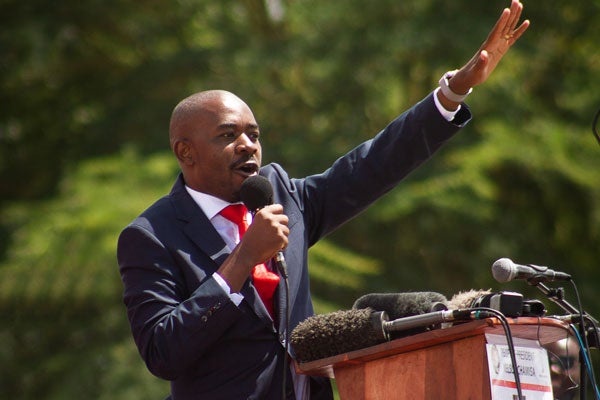 POLICE yesterday warned MDC leader Nelson Chamisa that they would descend heavily on him if he incited opposition party supporters to engage in street protests and cause chaos in the country.

Chamisa on Wednesday indicated that he was now ready to confront President Emmerson Mnangagwa’s government on the streets, despite the threat of bloodshed from State security agents.

However, national police spokesperson, Assistant Commissioner Paul Nyathi said if the opposition party engaged in acts which would disturb peace, they would have themselves to blame when the law enforcement agents descend heavily on them.

“If there are unruly elements who will want to disturb the peace and order and attack the police and civilians going about their business, they have themselves to blame,” Nyathi said.

“ZRP will ensure that law and order is maintained and we will not divulge what we are doing right
now as that’s a security issue. Issues of security are not divulged to the public. I want to assure the public that (it) should be free do (its) activities without any fear.”

The spokesperson said if Chamisa wanted his views to be heard, he should engage lawmakers so that they can be considered.

“There is no one in the country who has the preserve to disturb the peace of other people. ZRP has a constitutional mandate to maintain law and order. People who conduct their various activities should do so in a peaceful manner. Police are there to protect peace and laws of the country,” Nyathi said.

Chamisa, who was on a whirlwind tour of provinces visiting party provincial structures earlier this month, told journalists on Wednesday that the general sentiment was that people were angry and ready to confront Mnangagwa’s government on the streets over his handling of the economy, alleged incompetence, arrogance and ignorance in the face of “humanitarian and political crises”.

However, Chamisa’s spokesperson Nkululeko Sibanda said they were unperturbed by the police threats.

Mnangagwa has refused to meet Chamisa for talks to end the economic and political crises in the country, insisting that the opposition leader should join his Political Actors Dialogue (Polad), comprising fringe political parties, among them Thokozani Khupe’s MDC-T and Lovemore Madhuku’s NCA.

Chamisa has dismissed Polad as a Zanu PF “choir” and demanded dialogue convened by a neutral convener.

Meanwhile, police in Harare yesterday quizzed seven Allan Wilson High School students for allegedly participating in a demonstration led by the school’s former headboy recently, where he allegedly attacked Mnangagwa’s administration and made fun of his “sadza nemuriwo” (sadza and vegetables) statement.

The students’ lawyer, Tinashe Chinopfukutwa, from the Zimbabwe Lawyers for Human Rights, said his clients were initially told they would be charged for participating in an illegal demonstration around the Copacabana area in the central business district, but that was changed and they were asked to be witnesses.

“Initially, they were to be charged for participating in an unlawful gathering addressed by some young man said to be a former headboy of the school,” he said.

“This took place on February 7 around the Copacabana area. They then changed and they now want to make them witnesses, so they are recording their statements and they will be released.”

Chinopfukutwa said it was an impromptu protest and address by a former student, whose statement criticised government.

“He allegedly addressed them about sadza nemuriwo and basically criticising the government,” he said.

The statement sadza nemuriwo was made by Mnangagwa in January during an address at a clean-up campaign in Kuwadzana high-density suburb after residents had complained that they could no longer afford meat.

Mnangagwa jokingly advised them to stick to a healthy diet of sadza or potatoes with vegetables.