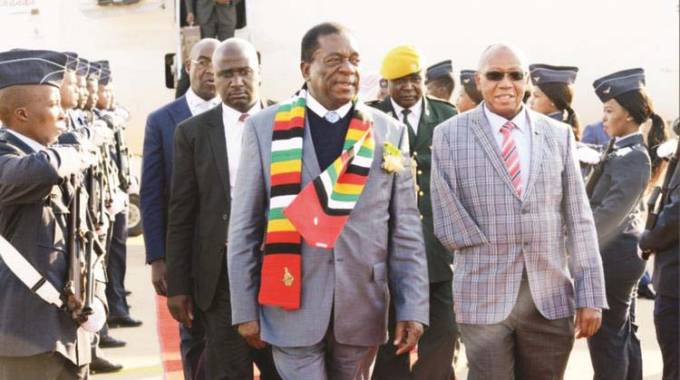 He landed at the Waterkloof Airforce Base near Pretoria late in the afternoon and was welcomed by South Africa’s Deputy Minister of Defence and Military Veterans, Mr Kebby Maphatsoe; Zimbabwe’s Ambassador to South Africa, Mr David Hamadziripi, and other officials.

The summit, being held at the Sandton Convention Centre in Johannesburg, started on Wednesday and ends today.

BRICS is a group of emerging economies and its members are Brazil, Russia, India, China and South Africa. Presidents Vladimir Putin of Russia, Xi Jinping of China, Michel Temer of Brazil and India Prime Minister Narendra Modi and host President Cyril Ramaphosa are attending the event. A number of presidents whose countries are not members of BRICS were invited to attend, among them President Mnangagwa and Turkey leader, Recep Tayyip Erdogan.

Soon after arriving in Johannesburg from Pretoria, President Mnangagwa paid a courtesy call on President Ramaphosa. Today, he is expected to address the three-day summit being held under the theme “BRICS in Africa: Collaboration for Inclusive Growth and Shared Prosperity in the Fourth Industrial Revolution”. He is also expected to meet President Putin today.

Speaking at the opening session of the summit, President Ramaphosa said advances in technology and innovation present enormous opportunities for growth, development and human progress.

“This surge in innovation has the potential to dramatically improve productivity and to place entire countries on a new trajectory of prosperity. It has the potential to solve many of the social problems we face, by better equipping us to combat disease, hunger and environmental degradation. However, unless it is approached in a collaborative manner, underpinned by a developmental agenda, rapid technological change could merely serve to entrench existing disparities within and between countries. It could also create new faultlines in our societies,” he said.

He implored BRICS members to unite to be better able to confront the challenges and seize the opportunities that this new age of development presents.

PM Modi said it has become ever more important for countries to provide social security to citizens due to the disruptions caused by new technology.

President Putin praised the late former South Africa President Nelson Mandela. “During his entire life, he has been upholding and protecting the principles of equality, openness and fairness. Mr Mandela’s legacy is reflected in the activities of Brics.”

President Xi said differences between countries should be settled through dialogue and consultation, in apparent reference to his country’s tariff trade war with the US.

The BRICS leadership issued the Johannesburg Declaration that urges unity among nations and pursuit of multilateralism.

“We recommit our support for multilateralism and the central role of the United Nations in international affairs and uphold fair, just and equitable international order based on the purposes and principles enshrined in the Charter of the United Nations, respect for international law, promoting democracy and the rule of law in international relations, and to address common traditional and non-traditional security challenges. We welcome the hosting of the BRICS-Africa Outreach and second BRICS Plus Cooperation with Emerging Markets and Developing Countries (EMDCs) during the Johannesburg Summit,” they said.

President Mnangagwa is accompanied by the Minister of Foreign Affairs and International Trade, Lieutenant General (Retired) Sibusiso Moyo, Permanent Secretary in the Ministry of Media, Information and Broadcasting Services Mr George Charamba and senior government officials. He was seen off at the Robert Gabriel Mugabe International Airport in Harare by Minister of State for Harare Metropolitan Province Cde Miriam Chikukwa, service chiefs and senior Government officials.