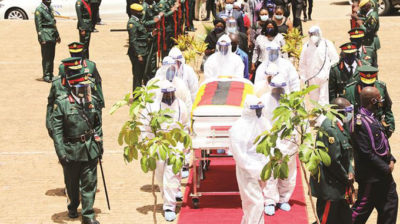 President Mnangagwa has described Brigadier-General Collin Moyo (Retired), who died last Friday and was buried yesterday at the National Heroes Acre in Harare, as a brilliant military instructor, who trained many cadres during the liberation war, including the current Commander of the Zimbabwe Defence Forces (ZDF).

Brig-Gen Moyo’s contribution to the liberation struggle, the President said, was recorded in the annals of the country’s history, including as a military instructor at Morogoro Training Camp in Tanzania between 1973 and 1976.

“I received news of the untimely death on Friday of Brigadier-General (Retired) Collin Moyo at the Haematology Centre in Harare with great sadness and a deep sense of loss.

“His passing on has created a deep void in our midst, especially among those of us who lived and fought alongside him during the period of our armed liberation struggle. We never expected that his illness was life-threatening to the extent that he would leave us so soon.

“The late Brigadier-General Moyo, also known by his Chimurenga name as Rodwell Nyika, was a veteran of the armed liberation struggle who joined other revolutionary Zipra cadres in Zambia at a very tender age. In that role, he trained many cadres, including the current Commander Defence Forces, General Philip Valerio Sibanda,” said President Mnangagwa.

He said apart from being a brilliant military instructor, Brig-Gen Moyo (Rtd) would also be remembered for forging the unity of fighters across the then political divide.

Brig-Gen Moyo did not only realise the wisdom of the strength in numbers, but also that the liberation struggle was national in character, whose main goal beyond political independence was the establishment of a unitary State of Zimbabwe which would be home to all Zimbabweans regardless of tribe, colour, creed or political affiliation.

“On behalf of the party, Zanu PF, Government, the people of Zimbabwe, my family, and indeed on my own behalf, I wish to convey my heartfelt condolences to the Moyo family, especially to his wife and the children, who have lost a loving husband, father and pillar of strength. May they take comfort from the knowledge that we are together during this their darkest hour of grief,” said President Mnangagwa.

Brig-Gen Moyo’s burial was attended by a few family members, friends and Government officials in keeping with Covid-19 regulations to avoid the spread of the pandemic.

Speaking at the burial of the national hero, Acting President Kembo Mohadi described Brig-Gen Moyo as a decorated military commander who dedicated his life to liberating the country from the yoke of colonial bondage.

“Death has robbed us of an outstanding soldier, a leader, an inspiring instructor who was instrumental in moulding some of the war veterans and soldiers who are still active in Zimbabwe today. He was a fountain of knowledge grounded in sound political philosophy. Many of us remain with fond memories of his instructive wisdom.”

Acting President Mohadi warned the public against complacency as Covid-19 cases were increasing, saying the second wave of the lethal viral infection threatened the core of the productive sector.

“As the nation mourns this National Hero, we are faced with a deadly and silent killer Covid-19 which also robbed many families across the nation of a father, brother, sister, mother, daughter or son. This second wave of the lethal viral infection threatens the very core of our nation’s productivity.

“Whilst the late Brigadier General Moyo did not die of Covid-19, we nonetheless are cognisant, as a nation of the importance of the prevention of the spread of this virus by strict observance of the restriction regulations and the World Health Organisation protocols of frequent hand washing with soap or sanitise, proper wearing of masks, social distancing and staying at home unless it is absolutely imperative for one to leave their home,”.

Turning to the quest for economic emancipation, he said as the country embark on the National Development Strategy 1, it is incumbent to take a leaf from such as cadres like the late Brigadier General Moyo.

This economic war, he said needs no guns but a people with focused, transformative, diligent and productive mind.

“Armed with a positive, winning mind-set we can make the economy tick once again. As Zimbabwe moves, into the practical implementation of the NDS1, we seek to put into practical form that which we learn.

“This is why our universities are moving towards the industrialisation and transformation of our communities. The late Cde Moyo like many of us who went through the training, did not learn for the sake of learning. We acquired knowledge and skills so that we may win the independence of our nation,” said Acting President Mohadi.

He encouraged youths to make of use of education to produce an economy, an industry and shape the future livelihoods for prosperity.

He further said the desire of the Second Republic is to build and transform the economic and social landscape of Zimbabwe.

“We must never lose our focus from creating a prosperous Zimbabwe as guided by our national collective vision that leads us to vision 2030. We should not give up. Our gallant freedom fighters did not give up during the bombings and attacks of the enemy. We need to continue to fight to better the lives of our people,” he said.

He said that the nation was losing the founding crop of veterans of the armed struggle.

“These men and women leave behind them an illustrious trail of gallant efforts made to win us the freedom we now enjoy. We gather at this sacred shrine to not only inter his remains, but certainly to mourn, celebrate, cherish and express our eternal gratitude to his contribution to the liberation of our nation Zimbabwe.

“Fellow compatriots, death has robbed us of an outstanding soldier, a leader, an inspiring instructor who was instrumental in moulding some of the war veterans and soldiers who are still active in Zimbabwe today,” said Acting President Mohadi.

He described the late national hero as a fountain of knowledge grounded in sound political philosophy.

“Many of us remain with fond memories of his instructive wisdom,” he said.

He was the second child in a family of 10 and attended several primary schools in Mberengwa before doing O-Level at Chegato Secondary School in the district.

He grew up in a village environment and as a result of his upbringing, he became conscious of political injustices and that compelled him to join the liberation struggle at 18.

In July 1972, the he joined the liberation struggle in Zambia after going through Botswana.

In Zambia, he and others were met by Zipra leaders such as Cdes Jason Ziyaphapha Moyo, Alfred Nikita Mangena, Elliot Maseko and Ambrose Mutinhiri who facilitated their movement to Morogoro in Tanzania for military training.

In early 1973, he started training with 83 others under the commander of the training camp Cde Sam Mfakazi and instructors, Cdes Jevan Maseko, Gedi Dube, Dubu Nleya and Stanley Gagisa.

They went through a six-month semi-commando course covering all aspects of guerrilla warfare.

During the course, he was chosen to attend the Zipra Conference of Militants at Zambia’s Mwembeshi Camp.

Brig-Gen Moyo (Rtd) was instrumental in the training of over 5 000 recruits at Morogoro Training Camp between 1973 and 1976.

When the Zimbabwe People’s Army (ZIPA) was formed in 1975, he was heavily involved in some joint training among Zipra, Zanla and ANC cadres and his contribution was invaluable.

ZANLA recruits and instructors were from Mgagao and some ANC recruits came from Mbagala and Dar-es-Salaam.

The training team recorded some successes up until some disturbances which led to the closure of Morogoro Camp and the setting up of the new training camp at Chakwenga.

In early 1976, Bri-Gen Moyo was selected to go on a special course in the then Soviet Union leading a group of 200 combatants.

He went to Moscow and later to Sinferopol in Ukraine for further training.

The late Brig-Gen Moyo returned to Zambia at the end of 1976 and briefly stayed at Freedom Camp from where he was deployed to Feira Luwangwa area as a regional commander.

He also operated in Kachuta, Doma, Rafingora, Mhangura, Mutorashanga, Vhuti, Kazangarare, Miami, Chindu and Karuru areas. His mission was to plan and conduct war operations and to destroy all enemy infrastructure in the area of responsibility.

At one point half of the country was under his command and as commander northern front, his area of responsibility covered three provinces which were Mashonaland Central, Mashonaland West and Matebeleland North stretching along the Zambezi River from Kazungula, Victoria Falls, Kariba Dam, Chirundu up to Kanyemba.

He commanded more than ten thousand armed men and women from his headquarters at the town of Kapfuwe in Zambia.

Under him were three regional commanders who waged the struggle until Independence. The late General commanded the Kavalamanja-Karoro Battle which the Zambians called “Nkondoyamukwezvalamba”.

The battle took place at Kavalamanja village about 30km from Feira along the Zambezi River. The battle was carried out by a combination of ground troops, paratroopers and aircraft. The battle lasted for four days with casualties on both sides.

He also masterminded the attack of Mana Pools Camp by ZIPRA forces. It was a well planned operation that was conducted by ZIPRA forces at night and the camp was overrun with many casualties on the enemy

At cease fire time ZIPRA created a reserve force of about a brigade which remained in Zambia. This brigade was part of a contingency plan against the Rhodesians in case things went wrong during the ceasefire period.

The brigade however later went into PAPA assembly point where he was the commander.

At Independence, the late General was attested into the Zimbabwe National Army and was attached to Headquarters 4 Infantry Brigade as a green board officer together with Air Vice Marshal Henry Muchena, the late Air Chief Marshal Perrance Shiri and Brigadier Gen Abel Mazinyani, Lt Col M. Mpofu and Comrade Deny Murimo. He was commissioned as a Lieutenant Colonel in 1982 after which he rose to colonel and Brigadier-General on retirement.

During his career he was deployed in Mozambique and Somalia as a military observer in 1992 and 1993 respectively and attended many military courses.

Brig-Gen Moyo is survived by his wife and six children.