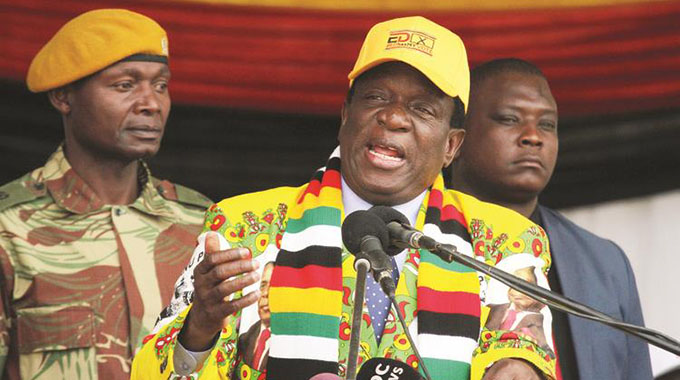 Norman Muchemwa Herald Reporter
President Mnangagwa will tomorrow meet members of the National Youth Service Graduates Association at Robert Mugabe Square in Harare. The association, which is registered under the Zimbabwe Youth Council, is an affiliate organisation of the zanu-pf Youth League and has a membership of more than 90 000, that were trained at various training centres since 2000.

Addressing a press conference at zanu-pf headquarters in Harare on Saturday, the association’s public relations officer Cde Tariro Ibwerinofa said the interface will give them an opportunity to pledge their support to the President and listen to his vision on youths.

“The meeting will give the youths an opportunity to hear His Excellency on policy for the young people,” he said. “To give youths the opportunity to interface with His Excellency, the President of Zimbabwe and to pledge our support for him. We are ready to exert our skills and energy in developing the country.

“We are sending the message to investors that we are ready to contribute to the national development agenda of becoming a middle income economy by 2030.”

The association’s chairman Cde Abson Madusise pledged over 80 000 votes for President Mnangagwa and urged youths to vote wisely for peace and development.

The association was formed to mould strong and patriotic youths who are ready to serve their country in times of need and for economic development.