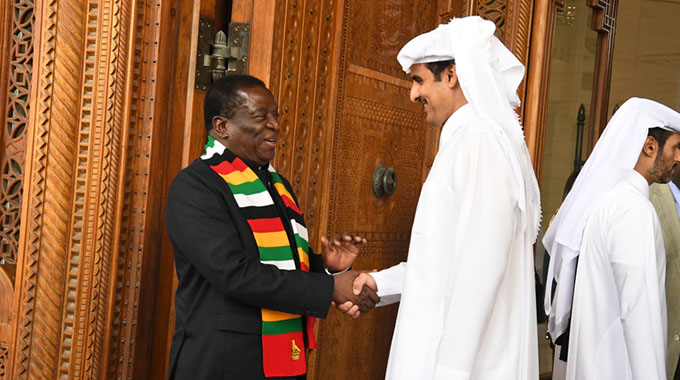 From Kuda Bwititi in DOHA, Qatar

President Mnangagwa yesterday met the Emir of Qatar Sheikh Tamim bin Hamad Al Thani as the country began its first high-level engagement with one of the richest countries in the world.

Soon after the meeting at the Royal Palace here, the two leaders witnessed the signing of a cooperation agreement by Finance and Economic Development Minister Patrick Chinamasa and his Qatari counterpart, Ali Shareef al-Emadi, to enhance bilateral and economic cooperation.

Presidential spokesperson Mr George Charamba said unlike other investors, Qatar will send a business delegation to Zimbabwe before the harmonised elections.

“Qatar is also sending a business delegation to scout for investment in Zimbabwe. What is significant is that this mission will come to the country before elections, unlike other investors that have only said they will come post-elections. You should also note that in terms of capital, Qatar is up there with the best in the world,” he said.

“We have agreed that we negotiate and conclude a Bilateral Investment Protection Agreement.

“We have also agreed to negotiate and conclude a double avoidance of taxation agreement. These are matters we are going to pursue more immediately.

“As you may know, His Excellency, President Mnangagwa, has had a meeting with His Royal Highness. I was able to sign an economic and technical agreement with my counterpart. We also have bilateral meetings which are going on and we are focusing on economic cooperation,” he said.

“At the moment, we are trying to identify areas of cooperation and we are looking at power generation, which could include gas or coal or hydro, infrastructure and tourism.

“Those are the areas which we will focus on as we develop the relationship, as this is our first contact with Qatar.

“Business is about relationships; we have to develop relationships before we can realise the outcomes that we so desire. These are first contacts and I am hopeful and quite optimistic that this first contact will develop into a full-blown economic relationship,” he said.

According to Minister Chinamasa, President Mnangagwa had accepted the Qatari leader’s invitation as part of the new administration’s thrust to engage with the global community.

“This is an invitation we were ready to accept in order to promote the economic recovery of our country.”

“They have an appetite for energy resources which we have. They also have an entity called Mining Investment Cooperation, which focuses on mining investments in Africa and I am meeting them later,” he said.

Qatar is one of the richest countries in the world with a per capita income (total income (GDP) divided by size of population) of US$124 927.

With more than 25 billion barrels in oil reserves and the world’s third-largest natural gas reserves, Qatar has also strengthened sectors such as manufacturing, construction and financial services.

The Gulf nation is set to host the 2022 World Cup.

Zimbabwe has natural gas reserves in Lupane, which are currently unexploited.

Later on, President Mnangagwa toured the Katara Cultural Village, which is a major tourist attraction in Qatar.

Speaking after touring the cultural village, the President said: “I have already made my observation that this is a unique preservation of culture both for current and future generations. They will say indeed the generations that have gone before us have preserved the culture of our people. This is excellent work and I am impressed.”

Qatar boasts of some of the world’s best infrastructure.