PRESIDENT Mnangagwa will consider how Govenment can best help local football clubs, who have been badly hit by the Covid-19 pandemic, until the situation returns to normal.

A keen football fan, who is also the patron of his hometown club, FC Platinum, the President has been touched by the plight of the nation’s teams who have been struggling in the wake of the pandemic.

Domestic football has been on hold since Government intervened as part of the lockdown measures, introduced in March last year to try and contain the Covid-19 crisis.

This has meant local clubs, who have depended on gate receipts to oil their operations, have found themselves struggling, just to stay afloat.

The players, and coaches, who also rely on winning bonuses, have also found their income being severely eroded, and have been calling out for help.

Yesterday, President Mnangagwa hosted the Dynamos leadership, who paid him a courtesy call, at State House.

Presidential spokesperson, George Charamba, said the President was going to consider how best Government could help the local clubs until their plight improves.

“His Excellency, the President, has taken a special interest in different disciplines of sport and, in the wake of Covid-19, which you know has frozen all sporting activities in the country, he is aware that there is a direct link, between resumption of sporting activities and the financial well-being of sporting associations, including football.

“As you recall, when he went to Nyamandlovu, he met with Highlanders officials.

“The story is the same, the clubs are facing very serious challenges, which are Covid-19 related.

“What His Excellency is doing is how best clubs could be assisted, by Government, until we get to normalcy.

“So, you will see him interfacing with players of sports, as well as the arts world, the areas which been affected the most.

“The meeting was amicable. The President listened to Dynamos issues. He is going to work with our Minister (Kirsty Coventry) to make sure the clubs are assisted.’’

The Glamour’s Boys were led by club patron, Webster Shamhu, and board of directors’ chairman, Bernard Marriot.

They presented President Mnangagwa with a personalised blue DeMbare jersey.

The President was also presented with another framed jersey for the First Lady.

Dynamos also presented the President with a sculpture, of his totem, Shumba.

Although the President is the patron of FC Platinum, the current local champions, as the country’s leader, he also supports all the football clubs, across the nation.

Ahead of the 2019 AFCON finals, President Mnangagwa led the way, in mobilising funds, for the Warriors, during a fundraising dinner. 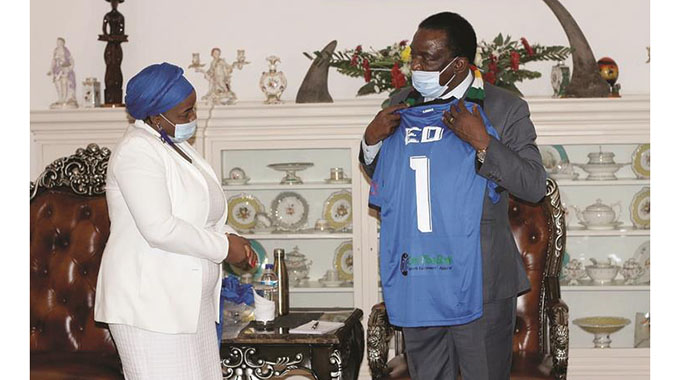 This is the second time the President has met with the leaders of one of the country’s top Premiership sides, after meeting the Bosso leadership, in Bulawayo, recently.

Charamba said following the introduction of vaccines, there was need for caution before footbal, which is a contact sport, could resume.

Especially at time, he said, when the vaccination programme had just been introduced. He said the Government was winning the battle, against the virus, and there was no need to reverse the gains which the country has made, through a lot of sacrifice, in the past year.

“I think it is too early to get to a situation where football must return. . . We are winning the war (against the virus),’’ said Charamba.

“The various actors are aware but the key thing is we must keep them in a state of readiness, so that we don’t find ruins, when we resume sport.’’

Neighbours Botswana, whose national team is set to host the Warriors in the next AFCON qualifiers, later this month, have also not resumed their football activities.

Football has been classified as a high-risk sporting code and negotiations, and consultations, are still underway, to have the game return in a safe environment.

The Ministry of Youth, Sport, Arts and Recreation and the Sports Commission, this week appeared before the parliament portfolio committee, to present evidence on the resumption of sport.

ZIFA have applied for resumption but the country’s football controlling body are still waiting for permission to return to action following 15 months of inactivity.

Dynamos spokesperson, Mangunda, said they were able to narrate their history to the President, as well as briefing him on the current situation, and their future plans.

“It was a courtesy call but, at the same time, we took time to tell the President about, firstly, Mr Lusengo talked about the history of the club, when it was formed in 1963, until present,’’ she said.

“It was basically just that, a discussion on the way forward, things that Dynamos are hoping for, the things that are our obstacles and also the issue about how Covid-19 has affected sport.

“The President made some contributions, on the submissions we made, he was even surprised by some of the issues we raised, but it was a closed meeting.’’

Dynamos are the country’s biggest, and most successful, football club. The Glamour Boys have the biggest support base, in the country, and their brand is known across the continent.