President Mnangagwa is led on a tour of Willowton Group premises by Factory Manager Mr Saj Saj in Mutare yesterday.

Fungi Kwaramba in Mutare
BUSINESS and Zimbabwe at large should forget about baneful sanctions that were imposed on the country by the West and focus on local resources through value addition and increasing exports to the world, President Mnangagwa said.

The President who is on a nationwide tour of the country’s manufacturing sector to gauge capacity utilisation, assess challenges faced and proffer solutions, was yesterday in Mutare where he toured three companies, namely Wattle, Mega Market and Willowton.

Building on the success of the Second Republic interventions, including the Reserve Bank of Zimbabwe Foreign Currency Auction System as well as the taming of inflation, two measures that have brought economic stability, the President said his administration stands ready to create an enabling environment where businesses thrive and also promote innovation as it is an essential ingredient of the country’s quest to become an upper middle-class economy by 2030.

“Forget about the illegal sanctions. Focus on the resources in our country. We can build our country brick by brick to prosperity. We also have friends in Africa and abroad. What we need is to be united and forge ahead. Sanctions have helped us to be ourselves,” he said.

The President also saluted the manufacturing sector which has weathered not only the sanctions storm but also climate vagaries and other economic shocks such as the current Covid-19 pandemic.

“The fact that locally produced goods now constitute a larger share of our country’s supermarket shares, should encourage consumers to also buy products made in Zimbabwe. The developments will have a positive impact on sustainable socio-economic growth, employment and empowerment creation as envisaged in the National Development Strategy 1,” he said.

On top of that, the manufacturing sector, the President said, should come to the party through exercising prudence and discipline.

“Allow me to state that my Government is indeed alive to the challenges that are being faced by industry, including the companies we have visited today. I urge the private sector, throughout the country, to continue to proactively engage Government and its agencies in the spirit of dialogue, engagement and moving our country towards a more prosperous society,” he said.

Speaking about the visit to the three companies, namely Wattle which specialises in timber processing, Willowton which focuses on edible oil and Mega Factory which is into packaging and milling, the President said his tours, which last week took him to Bulawayo, are in line with the Second Republic’s culture of a listening Government.

“It is my hope that my delegation will gain insights towards development of robust and responsive policies for the growth of the economy. This collective approach further lays a sound foundation for the productive sectors to scale up production, productivity and capacity utilisation for the transformation as well as diversification of the country’s industrial sector,” he said. 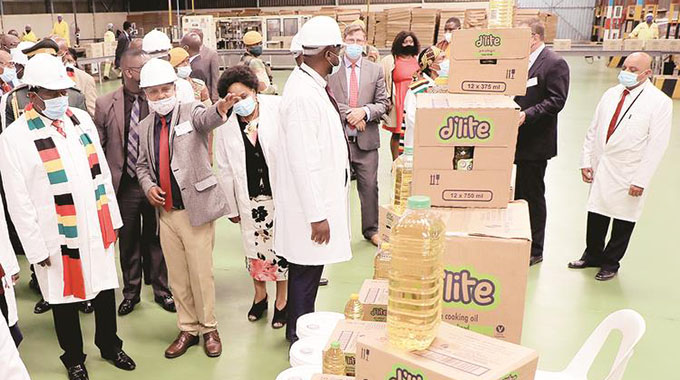 Modernisation, industrialisation and economic growth, the President said, remain a top priority for the Second Republic and this can be achieved through value addition in both the timber and edible oil subsectors among the broader sectors of the economy.

“Two days ago (Monday), I hosted the Ambrosetti Chief Executive Officers Community Africa Chapter at State House. The meeting was held under the theme, ‘The future of Zimbabwe and Africa post-Covid-19 scenario’, and presented a platform for the Ambrosetti Chapter an exposure to investment opportunities in our country.

“In this context, it is my anticipation that various sectors of the economy and provinces will follow up on the networks created by Government through such forums,”  he said.

Since coming to power in 2017, the President has deliberately pursued a re-engagement and engagement policy which is now bearing fruits while his mantra that “Zimbabwe is Open for Business” has resulted in

investors from across the globe trooping in.

Apart from that, the President has made devolution a key priority and yesterday challenged the province of Manicaland to scale up its production levels towards the attainment of an empowered and prosperous upper middle class economy by 2030.

“Investment by Mega Market into various projects which support the Local Content Strategy and Import Substitution Policy are celebrated. These will equally contribute to the objectives of the devolution and economic fortunes of Manicaland Province through the creation of employment and empowerment opportunities.

“Plans to set up the stock feeds and pasta manufacturing plants are most welcome and attest to the fact that Zimbabwe is a safe and favourable investment destination,” he said.

Mega Markets managing director Mr Shiraan Ahmed Muhammad, whose company is into maize and wheat milling, tomato sauce production, kapenta, popcorn and sugar bean distribution, said the policies that have been implemented by the Second Republic are inspiring.

“We are honoured that you took time to be here with us today. It shows your commitment to the business community and also Mutare at large. From the time you became President the narrative changed from what business can do for Government to what Government can do for business,” he said.

Infrastructural development, industrial full capitalisation, innovation and technology, along with the mining and agriculture sector are key components of the country’s economic recovery plan.

Already, the positives are being felt as local products are occupying space in the supermarkets, jobs are being created, and the agriculture sector, the mainstay of the country’s economy is on a rebound thanks to programmes such as Pfumvudza and Command Agriculture.

Tremendous development is taking place on the country’s conduits of transportation, with the Second Republic funding most of the capital projects which also include dam construction.