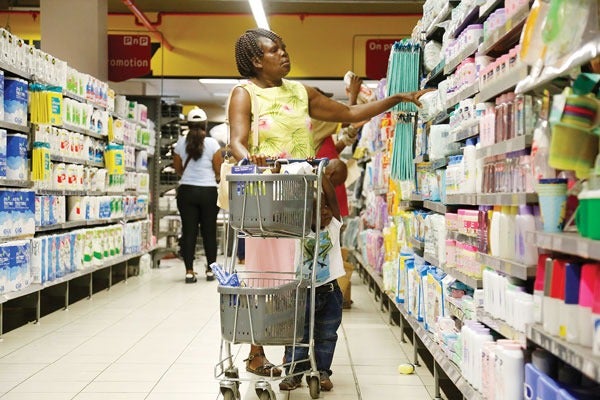 ZIMBABWEANS yesterday woke up to more retail shops charging in US dollars, with government joining in the bandwagon, amid shortages of basic commodities such as cooking oil and sugar.

The development comes as another wave of price increases on basic commodities such as mealie-meal, rice, flour, salt, cooking oil, among others, was imminent from today due to inflationary pressures as the economy continuously nosedives.

Some retailers have even stopped putting price tags on goods, as they continuously change on an hourly basis.

A survey by NewsDay in Harare, Bulawayo and other cities, has shown that most people had now resorted to panic-buying as prices soar.

Some of the prices have doubled or tripled compared to the last few months.

Cooking oil was yesterday selling at around ZWL$25 per two litre bottle compared to last week.

Addressing retailers in Bulawayo yesterday on commodity prices, Grain Millers Association of Zimbabwe chairman Tafadzwa Musarara said mealie-meal prices would be reviewed upwards.
He, however, could not divulge the new prices, but NewsDay understands that a 10kg bag of mealie-meal would go up from ZWL$11,85 to ZWL$18.

“We are yet to increase (our prices). We are concluding the discussions today (yesterday) and perhaps by end of today (yesterday), we will all know the new prices of all our products,” Musarara said.

He said for some time, the margins for mealie-meal, rice and salt had been 10% and in their case, it should be 10% plus 2% intermediary tax plus 1% bank charges, while self-raising flour and sugar beans have been 20% inclusive of 2% and 1%.

“We are not pushing for a price control. You get from us at different prices and you can mark up on those lines. We are simply saying from the maximum price that we shall give you, the maximum you should mark up is 10%,” he said.

Musarara said they could not commit to a certain price with retailers, but on margins for what they make and for what they will make, and they would deploy a monitoring team countrywide as from next week to make sure that their recommended prices were being adhered to.

“We have agreed on the margins and we hope that prices won’t change every week or every day,” he said.

“However, should they be so frequent, we have put mechanisms that we should change those prices as frequent as necessary and communicate to our colleagues.”

Confederation of Zimbabwe Retailers (CZR) president Denford Mutashu said retailers would not overcharge the consumers or profiteer on those products that they have agreed on.

“For those retailers that are in rural areas, we are also going to sit down and see if we can actually accommodate them in terms of additional margins that will arise out of the additional costs that they incur in the event that the millers are not transporting products to their doorsteps,” he said.

Consumer Council of Zimbabwe national chairman Phillip Bvumbe hoped that the exercise would be duplicated as far as other products are concerned.

CZR board chairman Zak Hawa said retailers were being affected by pricing, whereby suppliers were charging their goods and services in US dollars.

“We are concerned about the issue of prices which come through from our suppliers, manufacturers and these are problems for us. The price increases come forward on a regular basis. It sometimes nullifies the margins that you have worked on,” he said.

This comes as the State, which has been anticipating massive demonstrations against the President Emmerson Mnangagwa’s government over the worsening economic situation, was sold a dummy yesterday over the national shutdown.

In Harare, police maintained a presence in hot-spot areas, seemingly to detect and quell any protests which, however, never happened.

Vendors, who on many occasions clash with law enforcers, yesterday said they were not worried about the prevailing situation.

“We are doing our business as usual. There are no demonstrations and people are going about their chores like any other day. To us, what might cause alarm is the presence of police details both uniformed and ununiformed making their patrols. Obviously, our customers might have a problem with that. They will think something is wrong and they might not want to be caught up in crossfire,” one vendor, who plies her trade along Julius Nyerere Way, said.

People were seen standing in long queues waiting for Zupco buses to ferry them to their different locations.

In Bulawayo, police maintained a heavy presence around the city amid attempts to block Luveve Road by unknown people, who burnt tyres.

However, people went on with their usual business.

Some vendors, who used Luveve Road early in the morning, confirmed the temporary closure of the road by suspected protesters, whom they said were immediately dispersed by police.
“I saw tyres burning on one side of Luveve Road near Happy Valley Centre, situated close to Mzilikazi suburb. The road was also blocked with stones and vehicles were made to negotiate the blocked road in order to find their way into the city,’’ a vendor said.

However, Bulawayo police spokesperson, Inspector Abednico Ncube dismissed the reports that protesters had started blocking roads, saying the situation was peaceful in the city
“I have made an inquiry from Mzilikazi Police Station and I have been told that everything is normal, there is peace. Police presence means that they are doing their duties,” he said.

This comes at a time the State is cracking down on human rights activists and civil society leaders following phony messages circulating on social media platforms priming citizens to brace for protests.

Some were arrested on their way from a workshop in Maldives and have been arraigned before the courts.

The State media has been awash with threats against anticipated protests for some time now.

In January this year, Mnangagwa was forced to abandon his trip in Eastern Europe following nationwide demonstrations against the rise of fuel and the general rise in the cost of living.
Civil servants are expected to press the government with a new set of demands next week, claiming their earnings have been eroded to unsustainable levels.