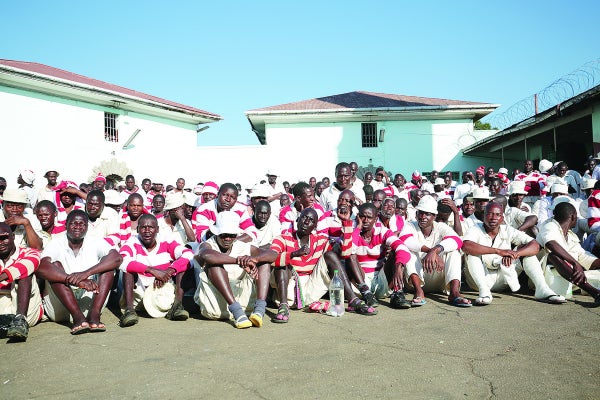 Inmates at Josiah Tungamirai Airbase in Gweru last Friday appealed to the community to accept them once they are released from prison, saying rejection was largely the push factor in former prisoners opting to return back to prison.

The inmates, who spoke on the sidelines of the Zimbabwe Prisons and Correctional Services (ZPCS) family week, said they had reformed, especially from rehabilitation life skills they were offered in jail.

A prisoner, Calvin Tshuma, who is left with 16 months on his sentence for assault, said he had learnt self-help projects and was ready to be reintegrated back
into society.

“My biggest appeal to the community is not to be seen as animals once we are released from prison,” Tshuma said.

“The biggest threat to the acceptance of a prisoner back into society is rejection. Yes, we might have committed crimes, but we are saying in life there is
always room for reforming. So please accept us back.”

While in prison, Tshuma said he had learnt horticulture, carpentry and painting skills which would help him start a new life outside jail.

Another prisoner, Lovemore Mapfumo, who is left with 105 days after serving more than three years for theft, said: “I always ask myself if society and, in
particular my family, would accept me back once I am out of incarceration.

“Such fear affects our reintegration into society and we appeal for acceptance. I have learnt skills in incubating chicken eggs and I would be useful not only
to my community, but the country as a whole once I am released.”

Stewart Moyo, who is serving four years for robbery, said he had learnt to be careful in the way he behaves, saying recklessness landed him in prison.

Moyo said he had now acquired skills in plumbing and building, and had become be a reformed person in life.

The prisoners are transferred from WhaWha Prison to the airbase when they are about to complete their jail terms.

Josiah Tungamirai Airforce Base commander Air Commodore Marcelino Jakuvos Jaya said they were helping inmates with life skills to remove the perception that
they were being punished. Saying the reorientation of prisoners was important to facilitate their reintegration to society, he said: “Reintegration into
society should not be hard for inmates and that is why we work with government through the ZPCS to equip prisoners with life skills.”