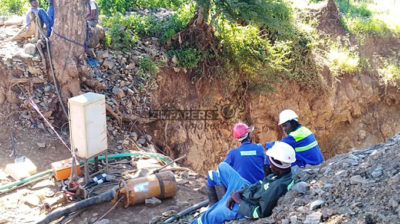 The Zimbabwe Mining Prospectors Association has accused inspectors at the Mines ministry of sleeping at the wheel while unqualified Environmental Management Agency (EMA) officers conduct safety measures at mining claims, leading to avoidable loss of lives.

The association’s president, Samson Dzingwe, said the Battlefields disaster, which claimed the lives of at least 24 artisanal miners, could have been avoided had the Mining Inspectorate Department been doing its duties as dictated by the Minerals Act.

“EMA is usurping the powers of the Mining Inspectorate Department. Why is EMA going there? What do they know about underground mining?” he asked.

“The people who are supposed to be on the ground assisting artisanal miners, doing routine checks and monitoring compliance are the officials in the Mining Inspectorate Department. The department has been made redundant for reasons best known to the Mines ministry.”

Mines minister Winston Chitando recently warned that heads would roll over the disaster.

“The ministry should not be found to be accusing the artisanal miners because they are not the source of the problem,” Dzingwe said.

“The major source of the problem is the ministry itself. The ministry messed up and it should clean up its mess.”

He charged that the investigation of the Battlefields disaster, which was handled by the police, was not done according to dictates of Statutory Instrument 109, which mandates mining inspectors to handle all mining disasters in the country.

“The first person who should be on the ground, according to the mining regulations, is the mining inspector before the scene of the accident has been disturbed. The mining inspector’s investigation should have been done within 24 hours and his report be completed within seven days,” Dzingwe said.

“You have people qualified to do the job, but you don’t send them to do it. What kind of administration is that?”

Operations of artisanal miners have largely gone unregulated and unmonitored, leading to many unreported deaths and injuries regardless of the fact that they contributed an almost equal amount of gold with established companies last year.