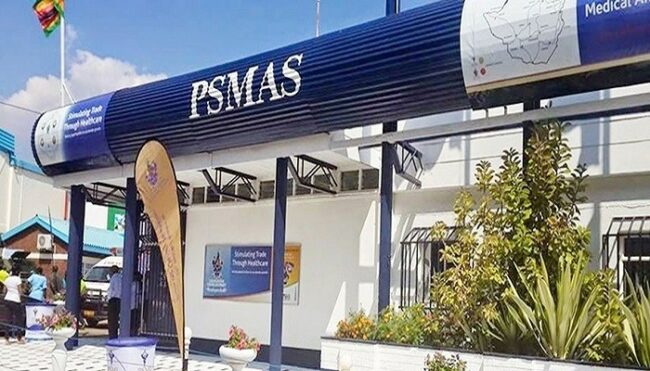 BY PROBLEM MASAU
COUNTER accusations of corruption, pilferage, underhand dealings, bribes and misuse of funds involving government officials, board members and other top executives are wreaking havoc at the Premier Service Medical Aid Society (PSMAS), which has left members and beneficiaries suffering.

PSMAS is the oldest medical aid provider formed in 1930 and boasts of over 600 000 subscribers, mostly drawn from the public sector.

But the company has not been able to meet its obligations to medical aid card-carrying members whose cards are being rejected by service providers.

Service providers cite the inability of the health fund to meet its obligations on time.

Top executives and government officials have been accused of splashing money on top-of-the range vehicles and receiving hefty perks while medical aid fund contributors are struggling to get medical treatment.

“The medical cards are being rejected and their (PSMAS) pharmacy is virtually empty, but money is being deducted on our salaries every month,” Zimbabwe Confederation of Midwives president Obert Nyatsuro told NewsDay.

Deep-seated divisions in the board have seen two factions emerging, one aligned to the government and the other representing labour unions, which are now tussling for control of the medical aid society.

The squabbles are reportedly so bad that riot police had to be summoned last week to stop an annual general meeting at a Harare hotel.

Those seconded from government are Public Service Commissioner Tendai Choruma, Deputy Chief Secretary to the President and Cabinet Martin Rushwaya and chief director in the Finance ministry Pfungwa Kunaka.

State-aligned board members are accused of scheming a government takeover of PSMAS and also sponsoring individuals in the civil service to support the bid.

They are also accused of instigating a government witch-hunt by using the Regulator of Medical Aid Societies to conduct a forensic audit on the service provider.

“It is part of the grand plan to impose their (government) proposals on the company,” said Zimbabwe Confederation of Public Sector Trade Unions secretary David Dzatsunga, who is one of the board members.

“The secretary in the Health ministry Jasper Chimedza is leading the audit, but he is also an interested party. He has his own private practice that deals directly with the company. He is our service provider, so he cannot be partial.”

Dzatsunga said the dossier which triggered the forensic audit originated from the Public Service Commission, in what he described as a well-calculated move by the government to takeover PSMAS.

“Government removed three board members and replaced them with high-ranking officials who came with a mandate to takeover PSMAS. We have been resisting them and now they are on a witch-hunt,” he said.

On Friday, the shadowy Public Servants Association (PSA) held a Press conference in Harare where it supported government’s initiative to “resuscitate” the ailing medical health fund.

PSA accused some board members of massive plunder and clandestinely registering a trust to sell PSMAS assets.

“We thus want to make it clear that we support the need for a forensic audit to be concluded which should be able to point out the loopholes which could have led to the pilfering and members being unable to access medical services from providers,” PSA coordinator Pisirai Ndarukwa said.

“The investigation was ordered by the medical funders because of several complaints from members who have not been able to access services or asked to top up for them to receive services from skilled health workers.”

Choruma denied that the government wanted to take over the company, and instead accused some board members of being activists.

“Some members of the PSMAS board appear to have become conflicted as they have launched a puzzling activism that claims that government, which extends significant funding to its employees to support their access to healthcare through the PSMAS card, and which has injected $5,2 billion into PSMAS since January 2022, intends to ‘take over’ PSMAS,” Choruma said.