Human trafficking has been worsened by Zimbabwe’s dire economic situation. Longtime Zimbabwe resident Sr. Janice McLaughlin works with fellow Maryknollers on the issue, through awareness and education, research and advocacy, and trauma counseling. 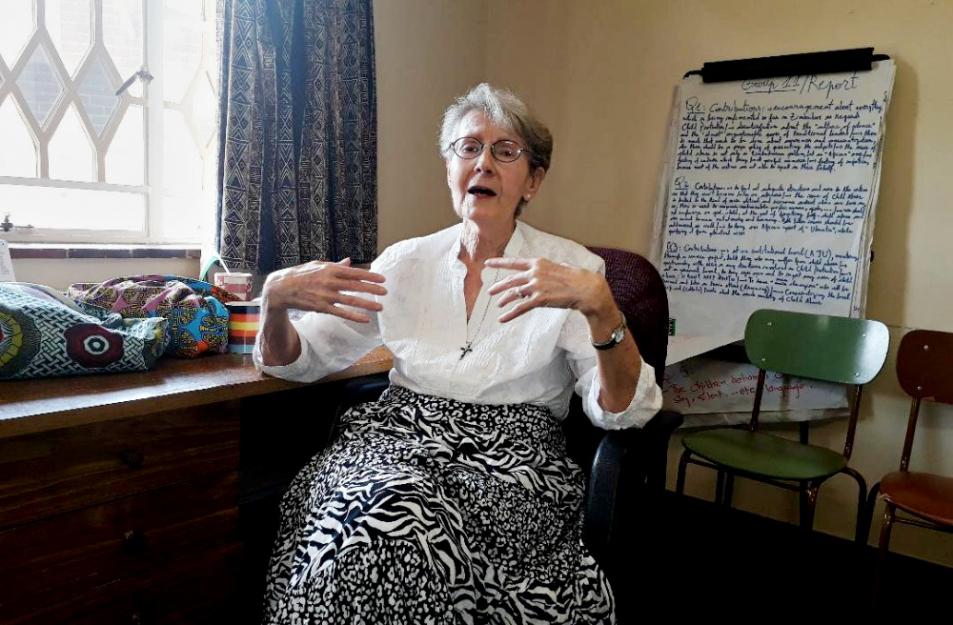 McLaughlin, who turned 77 on Feb. 14, is not new to Africa: She is originally from the United States but has been in Africa since about 1970, working in Kenya, Zimbabwe and Mozambique. Three months after arriving in Zimbabwe in 1977, she was imprisoned for writing reports on the country’s liberation war. She was then put in solitary confinement after the then-colonial government raided the offices of the Catholic Commission for Justice and Peace, where she worked as press secretary, for war reports the commission was compiling and publishing. She was in prison for three weeks before the government deported her to the United States.

After Zimbabwe gained independence from Great Britain in 1980, McLaughlin was invited back by the new government to work as an education consultant, and she has never looked back, guided by her immense love of the country and its people. Apart from working to combat human trafficking in Zimbabwe, she also works with the Catholic University of Zimbabwe as a research adviser and helps organize conferences.

GSR: How does human trafficking in Zimbabwe happen, and what makes the Zimbabwe situation unique?

McLaughlin: We are working with communities, and that’s where we focus. We want to educate communities so that they are aware of the human trafficking risks that young people are at, especially given the economic difficulties in Zimbabwe. Somebody comes along and takes a child and promises education and jobs in South Africa, and the parents never get to hear from them.

The other thing is what happens internally among families, where people in urban areas ask for a younger relative in the rural area to come and work for them as maids or gardeners. Often, the poor young people never get to go to school and end up being abused. Sometimes, these young girls that are brought to the city from the rural areas for work opportunities end up being impregnated by the husbands of the families they work for, and they often live under poor conditions, such as sleeping on the floor and being ill-treated.

A lot of people simply expect that their younger people or children will have a better life in the city, but a lot then happens after they leave the rural area. It’s another form of trafficking that is ignored.

In the past few years, some Zimbabwean women ended up in Kuwait and others in Saudi Arabia after responding to false promises of jobs in job advertisements in our newspapers.

From Zimbabwe, most people are trafficked to South Africa, either for cheap labor or for sex work. Occasionally, people get trafficked overseas, and a couple of young women have ended up in Saudi Arabia. But I think on overseas trips, the government and airlines are now much more alert.

How big a problem is human trafficking in Zimbabwe, and what are the key challenges to combating it?

Trafficking is still a big issue given the state of the economy of Zimbabwe. We are trying to do research to find out how bad it is. We have done research at border crossings to find out how it’s happening, and it’s very shocking. The borders are very porous, and there is so much corruption. We know children have been trafficked, mostly for labor in South Africa, but we don’t know the extent. We are going to do more research at the border with Mozambique. 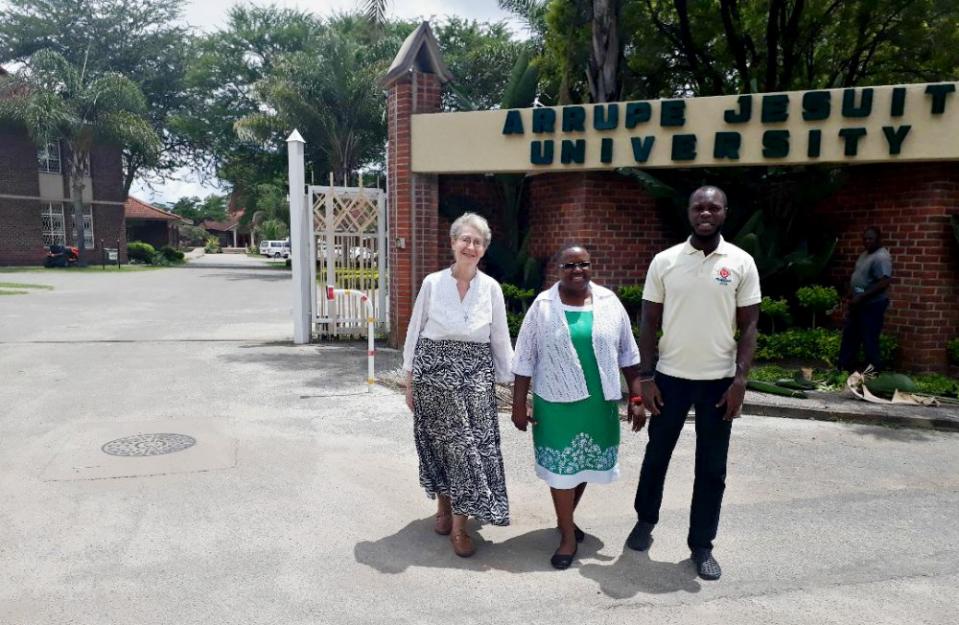 From left: Sr. Janice McLaughlin, with Dadirai Chikwekwete, who works full-time at the Maryknoll Sisters’ office, and Uche Okeke, who works part-time as a researcher on human trafficking (Tawanda Karombo)

How did the collaboration between the Maryknoll Sisters and AFCAST start, and what is the focus of the work you are doing?

AFCAST was founded in 2002 here at Arrupe Jesuit University [in Harare]. A group of Catholic sisters and other collaborators from southern Africa helped to start it, and as Maryknoll Sisters, we cover nine other countries in Africa.

Here in Zimbabwe, our focus is on human trafficking. We are planning to focus on environment issues, especially water.

We focus on issues that are relevant to the place or the country and also issues that the Catholic Church has taken a stand on. The pope says human trafficking is another form of slavery, and it indeed is because people are looking at exploiting other people for cheap labor or for sex work. It’s really heartbreaking that people can do this to each other.

We had a conference in Nairobi on human trafficking in 2015, and we had speakers from Nigeria, South Africa, Kenya and Mozambique. We published a book [The Scourge of Human Trafficking: Modern-Day Slavery] after that conference and launched the book here in Zimbabwe.

After that conference, a lot of people came up to us and said if we could do something on combating human trafficking here in Zimbabwe, they would assist and get involved. I realized there was interest and that people were willing to help.

Together, we formed a working group on combating trafficking involving independent people passionate about the issue. Our working group has three branches: awareness and education, research and advocacy, and trauma counseling.

At the same time, we had also invited the International Organization for Migration, and the Zimbabwe director came. She said she wanted to help, so we went to see her. IOM put us in touch with women who had been rescued from Kuwait. We assisted the women [by providing counseling and helping them with projects], and they assist us now. They come to all our events. They assist with setting up, and they help organize.

What kind of impact are you making in communities?

First of all, we have seen a change in the women who escaped from Kuwait. They are blossoming, and they are helpful and hard-working. There is a real interest in this issue, and we have educated a lot of people through our workshops and outreach.

We have people coming to us to say they want to assist in one way or the other. Recently, we had visitors from the U.S. who are also keen to assist. The survivors we are working with are now able to stand out in their communities and identify the red flags on trafficking.

Who do you work with and who do you target for the work you do to combat human trafficking in Zimbabwe?

I would say we are targeting the whole community. One of our sisters who works with orphans in Gweru rescued a few orphans that were almost being trafficked to South Africa. She caught it before it happened.

I don’t want to say the caregivers — people looking after these children, such as orphans — sell children to the traffickers, but somebody comes through and says, “I could help out. Let me take a few and help them find jobs in South Africa.” You have to educate the whole community. In Asia, it’s poor families selling their daughters. When people are desperate, they do desperate things.

We did a workshop for the national association for the deaf, where 100 people came here, and they were so engaged using sign language. They were asked if they knew if any of their members had been trafficked, and they said yes, mainly to South Africa. They want us to do this throughout the country, and eventually, we will get out to other places, but we have so much demand for Harare alone. We hope with enough funding we can do more outreach programs and help raise awareness and work diligently to combat trafficking.

What is in the pipeline for your work, and what else are Maryknoll Sisters planning to work on in Zimbabwe?

We want to also work with the police, immigration and bus drivers, the bus drivers who take people to the border and the truck drivers who often end up trafficking people. We also want to engage lawmakers so that we capacitate them to effectively craft legislation to curb human trafficking.

We intend to strengthen our work with women groupings that are in small-scale mining, and we will be looking for funding to proceed with that kind of work.

[Tawanda Karombo is a Zimbabwe- and southern Africa-focused journalist.]