A colony of quelea birds invades a wheat field at Precabe Farm in Kwekwe.

Quelea birds are posing a serious threat to the winter wheat crop which is nearing maturity in the country’s five provinces, warns the Plant Quarantine and Plant Protection Research Services Institute.

Mr Shingirai Nyamutukwa, head of the institute, told The Herald on Wednesday that the tiny species that flocks in huge numbers were attacking vast tracts of wheat fields in Mashonaland Central, East and West, Midlands and Manicaland.

“The winter crop is now at the ripening and maturity stage. This is a critical stage when quelea birds invade the crops. This year, the situation is dire as production levels for the winter wheat crop have trebled,” he said.

“About 95 percent of wheat damage is due to quelea birds while rodents and insect pests cause minor damage. Small grain farmers (sorghum and millets) also face challenges with quelea birds. We are working closely with the Zimbabwe National Parks and Wildlife Authority to control and manage the birds.”

The country requires 360 000 tonnes of wheat each year, mainly for flour and bread. 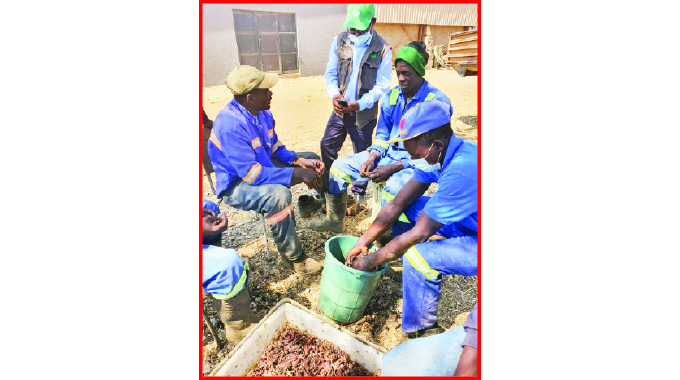 Preparing a delicacy . . . workers at Percychard farm in Kwekwe prepare quelea birds for relish despite the dangers posed by chemicals used in killing the birds.

Plant Quarantine and Plant Protection Research Services Institute and Zimparks have stepped up efforts to control and manage the birds at breeding and roosting sites dotted around the affected provinces.

“Our teams are on the ground and we are stepping up efforts to control quelea birds in their roosting areas using Cyanophos chemical,” Mr Nyamutukwa said.

“We are expecting to receive about 4 000 litres of the chemical. Quelea birds are posing a serious threat to the winter wheat crop and farmers must be on the alert. They must report early bird attacks to nearest Agritex officers or contact the Plant Protection Research Institute on cell 0772868804 or landline (0242)700143.”

Nyamutukwa encouraged farmers to provide areas where birds roost for easy assessment before spraying. He said bird repellents and Ness (Anthraquinone) Wettable Powder is one of the chemicals registered in Zimbabwe as a bird repellent.

“The chemical, sold as Bird Shield, is applied as either seed dressing at 1kg per 100kg seed or foliar spray at 30g/litre of water to repel birds. Farmers around Zimbabwe can access Bird Shield from Grain Marketing Board depots for use in quelea management.”

Quelea birds have been a threat to summer subsistence small grains and commercial winter cereal cropping in Zimbabwe for years.

Each tiny bird can feed on four grams of wheat per day and experts say a million birds can result in losses exceeding 40 000 tonnes when the quelea birds invade fields in large flocks.

The red-billed quelea is a small weaver bird native to sub-Saharan Africa and renowned for its attacks on small-grain crops within Africa. It is the most numerous bird species in the world, with a peak post-breeding population estimated at 1,8 billion.

Nomadic super-colonies can grow to millions of birds, making quelea not only the most abundant bird in the world but also the most destructive to cereal grains, especially sorghum and millets as well as wheat, rice and barley.