Source: Race to get Zimbabwean boy mauled by hyena to SA for life-changing surgery 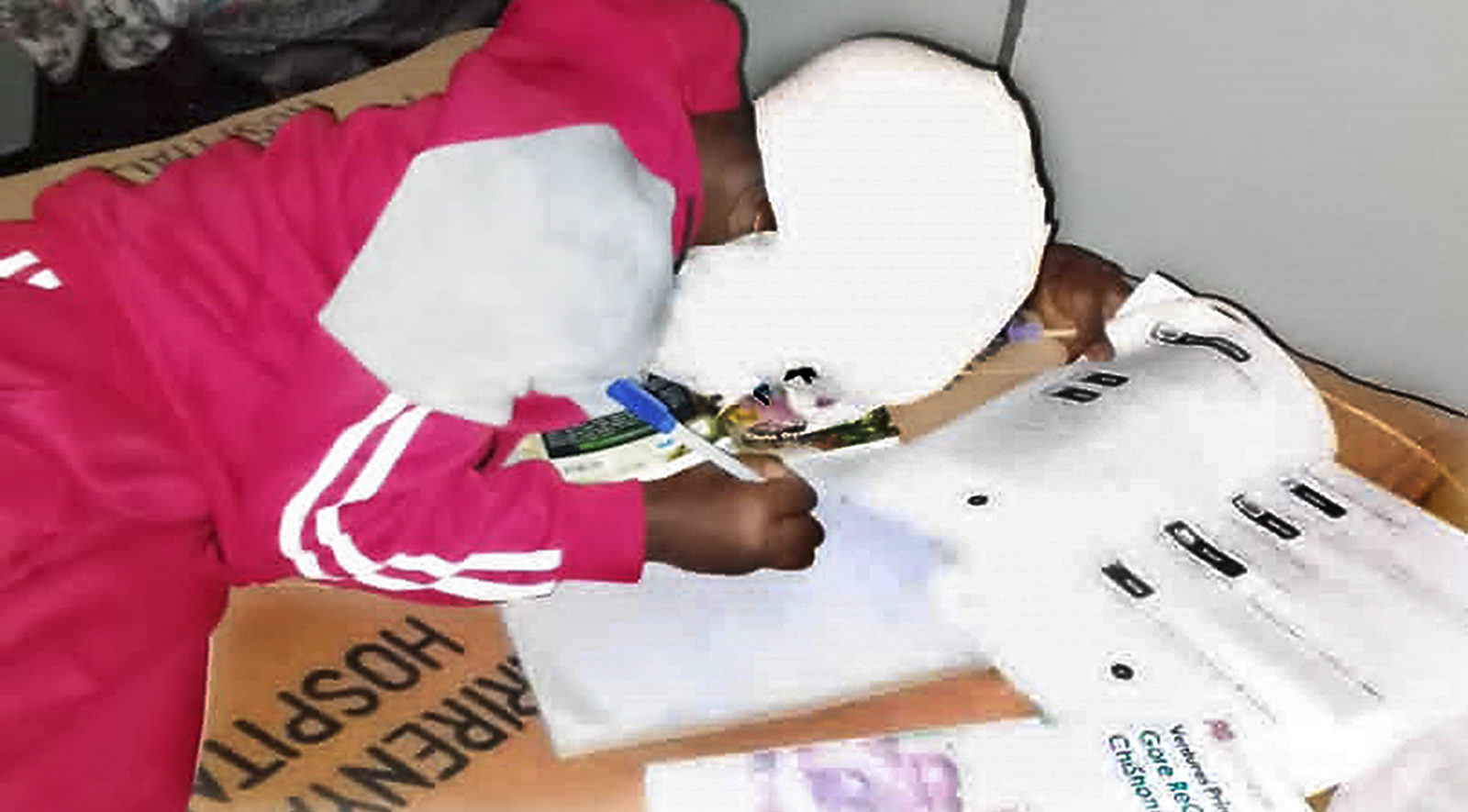 A heavily bandaged Rodwell Khomazana keeping up with his homework at Parirenyatwa Hospital in Harare this week. (Photo: Supplied)

Rodwell Khomazana is nine years old and a keen footballer, with dreams of becoming a doctor. His life changed on May 7, when a hyena mauled his face at an all-night church gathering outside Harare, Zimbabwe.

The youngster was rushed to Harare’s Parirenyatwa Hospital Paediatric Intensive Care Unit, where surgeons did the best they could to stabilise his condition. In the corridors, his mother, Shamiso Mabika, waited in shock.

Speaking to Daily Maverick via WhatsApp voice notes from the hospital in Harare, Mabika recalls her blood running cold when she heard the terrible news: “My mother took him to the church to an all-night prayer. The kids went to sleep, Rodwell with them. When he was asleep, a hyena came and attacked Rodwell on the face, removing his nose and the upper lip, and all two cheeks.

“I was not there. When I heard the story, I was shocked. I couldn’t believe it. I heard the news from my mother, that Rodwell was taken to the hospital by an ambulance, so I went to meet him there. When I saw him, I was very worried. I saw the wounds and the critical damage. The doctor said: ‘We will treat, by all our means, the child, by all our level best.’”

Mabika has stayed by her son’s side at the hospital since the attack. She forwarded Daily Maverick photographs of him sprawled on the hospital bed over books, his entire head wrapped in white bandages. She said that despite his serious injuries, Khomazana can speak a little bit, and that he has been keeping up with maths and English homework from his sick bed. He is a Grade 3 pupil at Manyiri Primary School in Zaka, 340 kilometres south of Harare.

“He is my superstar,” says Mabika. “I have four boys, he is the third-born. He loves reading, he loves his books. Today he is crying, because he wants to go back to school.”

If enough money is raised for his care in South Africa, Khomazana will arrive in Johannesburg on an SA Airlink flight – accompanied by South African medical staff – on June 19.

Speaking over Zoom, Mia describes the planned surgery as a challenge: “You know, it’s daunting. It’s big surgery, but I’m looking forward to it. Hopefully, it will go well. We have so much support and that makes a big difference.”

He says a proper assessment will be made first thing when they have Khomazana in theatre, adding that in all likelihood they will graft cartilage from the boy’s ribcage to rebuild his nose.

“And then to cover it with skin,” Mia continues, “this is something we would gauge when we first see him, to see what’s viable. Part of the forehead is still there. We often use the forehead, believe it or not, to reconstruct the nose. It’s one of the most ancient techniques used in plastic surgery, that we still use today very successfully. From the forehead, we use a flap of skin, that you turn over to cover the nose…” On the Zoom screen, he gestures with thumb and index finger over his own forehead.

Mia made world headlines in 2011 for his groundbreaking skin grafts on toddler Pippie Kruger, who suffered third-degree burns on 80% of her body when fire-starter gel exploded at the family’s home in Lephalale, Limpopo. Two years later, former president Jacob Zuma awarded Mia the National Order of the Baobab for this work.

“I’ve done quite a few pro bonos over the years, especially with kids,” says Mia. “You know, you look at kids and you think, well what if it was one of my own? I mean, this resonates with everyone. Yes, I do have kids; my daughter is two years and seven months old, and my son is seven months.”

At the heart of the local fundraising drive is trauma nurse Maqshuda Kajee, who originally learnt of Khomazana’s plight through nursing colleagues. “So, I know Sister Liz [Wilson] from Pretoria. We are on a medical group together. Sister Chaku [Nyamupaguma], Rodwell’s nurse in Harare, was actually a training sister under Liz,” says Kajee. “The appeal came from Sister Chaku to Liz, who contacted me.”

Kajee intends to fly to Harare at her own expense to accompany Khomazana back to Johannesburg. Also hoping to be on the flight is medical evacuation expert Dr Sayuren Moonsamy, who has helped pull the medical team together at Mediclinic Sandton.

“We’re hoping to fly out on Saturday morning, the 19th of June, to fetch Rodwell, to package him and then bring him back on the same day,” says Moonsamy. “From that point, we will hand him over to the medical team at Sandton.” Moonsamy tells Daily Maverick that in 2019 alone he completed 33 medical evacuation missions in 16 countries around Africa.

He adds: “So the aspect of the funding that we need to consider is that it doesn’t stop with just the surgical procedure. You know, Rodwell is going to need extensive therapy afterwards. We’re going to need physiotherapy, extensive occupational therapy to basically retrain him how to be a little boy again, psychotherapy. He will need to return to South Africa for follow-up visits to make sure that he’s on the right track. We also need to see to funding for his mum’s stay while in South Africa.”

Speaking from Harare, Mabika says she has never been on an aeroplane, and that she is very grateful for any help. “I am so relieved that my son may get a new face with reconstruction. I am looking forward to seeing him smile again, very much.”

Mabika’s husband, also named Rodwell, was a boat captain, but he passed away from tuberculosis last year. She is unemployed. “There is no work in my country,” she says. “No work, whatsoever.” The hyena accident happened during a service of the Zviratidzo Zvevapostori Apostolic Church.

Reflecting on the situation, Moonsamy says: “At this point, I think often people might be concerned about the nationality of the child. But I think that nationality is secondary in all of this. If you’ve got a child in need, regardless of where in the world they are based, you’re going to try to help them. Because if you were to see the extent of Rodwell’s injuries… you would truly appreciate why it doesn’t matter where he is from.”

Wrapping up, Mia brims with enthusiasm: “Well, whoever we’ve approached just jumped at the opportunity the moment I showed the photographs to them. They were all like: ‘Oh my goodness, yes. How can we get involved?’ I think everyone’s thinking about this child’s future. If we can help him out now, at least give him some semblance of normality growing up… we can make a huge difference to his life, you know.”

Donations for Khomazana can be made to mealiemeal producer MealSA, one of the main sponsors that have jumped on board.