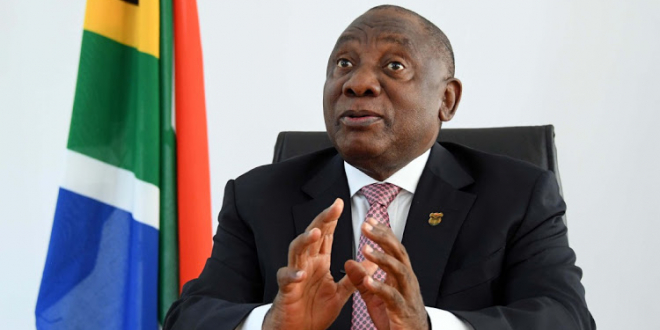 Pretoria – President Cyril Ramaphosa has invited Zimbabwe’s Zanu-PF director of information Tafadzwa Mugwadi to reveal his threatened “bombshell” regarding a recent visit by an ANC delegation to Zimbabwe.

Mugwadi has been embroiled in a prolonged war of words with SABC foreign editor Sophie Mokoena over what he claims to be biased reporting by South Africa’s public broadcaster.

Mugwadi recently wrote on Twitter: “If the ANC and SABC News do not restrain and reign [rein in] Sophie Mokoena whose fake news reporting and tweeting is directed at undermining a neighbouring country and President E.D Mnangagwa for no apparent reason, I will seek permission to leak a bombshell on why the ANC delegation came”.

Speaking to the SABC as the ANC marked its 109th anniversary this past week, Ramaphosa said Mugwadi could reveal his “bombshell”.

“In relation to Zimbabwe, I don’t know what the representative of Zanu-PF was talking about. I’m sure he will be willing to share all that with the ANC and with all of us. We sent a delegation, as the African National Congress, to Zimbabwe because Zanu-PF is a sister party to us.

“We have deep and strong links with Zanu-PF and it [the trip] was to express concern and also to find out what’s happening and to see the extent to which we can either be supportive and to fully understand what is happening. So as far as we are concerned there is nothing amiss and there is nothing we could say we have to hide.

“At government level, I appointed three envoys who went to Zimbabwe and we continue to interact with Zimbabwe, and I am also in contact with President Mnangagwa on an ongoing basis,” Ramaphosa said.

Mugwadi, also the Zanu-PF spokesperson, made the threat in reaction to what he has called “hostile reportage” against Zimbabwe and Zanu-PF by the SABC, and allegedly spearheaded by Mokoena, who often tags Mnangagwa in her Twitter posts.

Some of her tweets have, however, been flagged as “fake news”, particularly by Zanu-PF, as the pictures “depict incidents that did not happen in Zimbabwe”.

Recently, Mokoena asked Mnangagwa to explain the situation at the Beitbridge border post as thousands of Zimbabweans queued to enter South Africa.

On Sunday, Mokoena tackled Mugwadi, accusing him of floor-crossing and singing for his supper, joining Zanu PF after he was previously an active member of the opposition-aligned Zimbabwe National Students Union (ZINASU).

Mokoena shared a picture to her legion of followers, allegedly depicting Mugwadi attending an event of the opposition Movement for Democratic Change.

In some of his tweets, Mugwadi has called Mokoena “an embattled marriage wrecker in newsrooms” and in another tweet Mugwadi said Mokoena was “a concubine” of a senior ANC leader. He also accused Mokoena of dating one of Zimbabwe’s former cabinet ministers who had fled to South Africa.

The South African National Editors Forum (Sanef) has also called on the Zanu PF leadership to step in and discipline Mugwadi. On Saturday, Sanef said Mugwadi’s remarks against Mokoena were a bid to “intimidate, harass, and stop her from doing her job “. – African News Agency (ANA)/ IOL