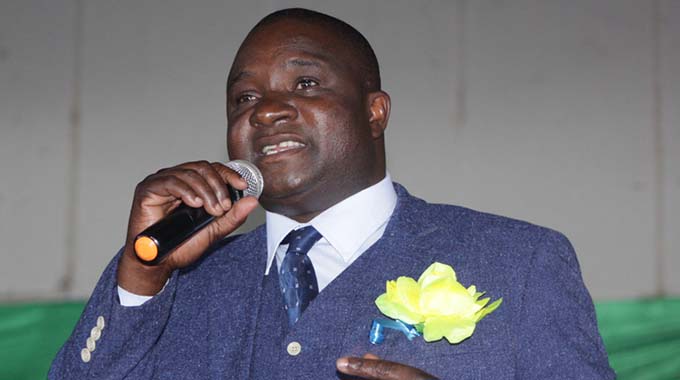 Pamela Shumba Bulawayo Bureau
THE Association of Rural District Councils (ARDC) led by Mr Killer Zivhu last Friday launched an election campaign to garner support for President Mnangagwa in rural areas ahead of the harmonised elections on July 30. The campaign was launched in Bulawayo at an ARDC congress attended by chairpersons of all the country’s RDCs.

Mr Zivhu, who is also the chairman of Chivi RDC and Zimbabwe Local Government Association (ZILGA) president, said the campaign, dubbed “One is Five ED Mnangagwa” , will see chairpersons from the 60 RDCs mobilising more members for the zanu-pf party.

“We are launching our campaign where all party members will be involved. This campaign was my idea as the chairman of RDCs and it will be spearheaded by chairpersons from all the 60 RDCs. Through the ‘One is Five ED Mnangagwa’ campaign, each and every zanu-pf member should recruit four people from their constituencies into the party.

“These new members should be registered voters. We’ll not only convince them to vote for zanu-pf but also tell them the benefits of voting for President Mnangagwa and zanu-pf,” said Mr Zivhu, adding that a majority of councillors and council chairpersons in the country were members of zanu-pf.

“We realised that crowds can deceive parties, so we’re not interested in crowds because people attend rallies for different reasons. We’re interested in talking to individuals to lure more people to the party and I believe that this strategy will give us good results.

“These chairpersons came into office through a party and they have every reason to support their party so that they continue in office and spearhead development programmes. Those who didn’t make it through the primary elections would want to make a second attempt and they can only do that if their party is in office,” said Mr Zivhu.

“The ease of doing business has seen a lot of great improvement in service delivery in our councils both in urban and rural areas and this is what people want. More investors are now showing interest in investing in our RDCs and also partnering in a number of projects,” said Mr Zivhu.

Last week’s congress witnessed the association adopting a new constitution that will assist in bringing up new policies in line with the new dispensation, and work towards curbing corruption.

“We are adopting a new constitution with a brand new vision. The current constitution was drafted in 1993. There has been a lot of change over the years and we realised that it was high time we reviewed our policies and have the same vision and focus as the new dispensation.

“There has been corruption in the council associations and our councils and the new constitution will go a long way in fighting this disease. We want to work hard to curb corruption and destroy syndicates involved in illicit deals both in councils and associations so that we move forward and develop our communities,” said Mr Zivhu.