Why you should vote for me: ED. . . President makes 5 election pledges 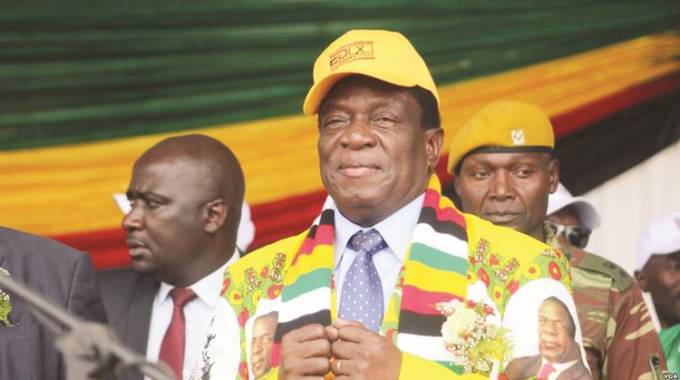 Takunda Maodza News Editor
PRESIDENT Mnangagwa, the Zanu-PF Presidential candidate on July 30, yesterday made five pledges to Zimbabweans realisable within the next five years if voted into power. He posted the pledges on his Facebook account.

“MY PLEDGE TO YOU: In the new Zimbabwe, leaders must be open, transparent and accountable to the people. The promises we make as part of the campaign should be be measurable and concrete,” he said.
The promises are on a “pledge card” and each card has President Mnangagwa’s signature.

“As part of my commitment to accountable and responsible leadership, we have made a ‘pledge card’, containing five direct and personal pledges to be realised over the next five years.

“Each card has my signature and should be considered a coupon for progress and a certificate of trust between me and you, the people of Zimbabwe. I invite everyone to keep hold of these cards and hold me accountable for these pledges,” said President Mnangagwa.

The five pledges are – leveraging the huge investment wave to create hundreds of thousands of jobs in agriculture, mining, tourism, the service sector and new infrastructure projects, have zero tolerance to corruption with anyone found guilty of corruption fired and punished accordingly.

President Mnangagwa is also pledging to develop infrastructure worth of a new Zimbabwe by increasing power generation, constructing new railway network and dualising all major roads.

Further, the President intends to establish a modern and affordable health care system for all by reducing hospital fees by 50 percent, improving supply of critical drugs, guaranteeing free healthcare to all cancer patients and building 78 new hospitals, ensuring one hospital per district.