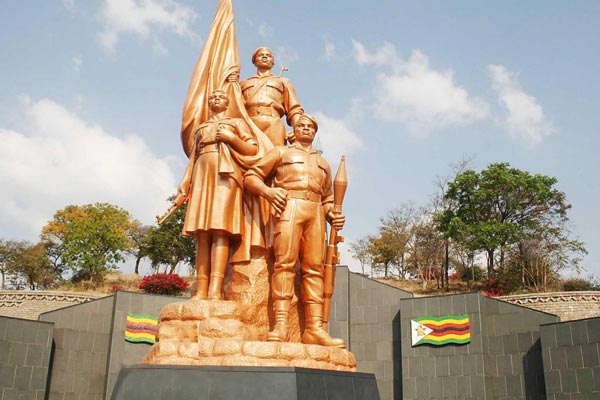 My Dear People,
Last week I wrote briefly about the Heroes Acre.

I was just pointing out how ED Lacoste should be getting concerned about how he has failed to preside the burial of real Zimbabwean heroes.

The kind of heroes that would have helped raise his political stock.

The kind of heroes that even he would admit, he was not worthy to preside over their burials given their superior stature, which is shrouded in allegations of bloody killings in the 1980s.

Surprisingly, although many people were linked to the bloodbath of Gukurahundi, including Robert Mugabe and Sidney Sekeramayi, Lacoste and Shiri have always received more blame for the mass killings.

More than 20 000 people were reported to have died during Gukurahundi through the use of different methods of elimination such as being shot in cold blood and buried in shallow mass graves, being thrown in to disused mines, being thrown into sulphuric acid tanks and being bayoneted  among other methods.

Back to the issue, which I raised last week, Comrade Lacoste needs to ask himself why for some reason, he has not been able to preside over the burials of real heroes.

The luminaries that he has not been able to make speeches at their burials include academic and nationalist, Phineas Makhurane, global music icon, Oliver Mtukudzi and internationalist and Southern African liberation stalwart Dumiso Dabengwa.

All had left clear instructions that they wanted to be buried at their home villages in Gwanda, Madziwa and Ntabazinduna.

If these had been buried at the Heroes Acre in Harare, anybody presiding over their burials would have been assured of a bumper crowd, which they would have told all sorts of stories.

Remember last week I had said that Dabengwa’s burial would have interesting dimensions.

But after having been tormented and jailed by state security agents in the early 1980s by operatives some of whom worked under Dhakisi Lacoste, the wily Soviet Union KGB trained intelligence supremo and guerrilla commander, known as the Black Russian had the last laugh.

With Dumiso’s struggle comrades from the African National Congress, ANC, Umkhonto WeSizwe, MK, including former presidents Thabo Mbeki and Jacob Zuma trooping into Bulawayo to bury one of Africa’s illustrious sons, the setting was embarrassing.

Whatever the excuses and the reasons, it must have been embarrassing that two more powerful former heads of states with functioning economies attended a funeral in Zimbabwe while our own president could only pay condolences from the safety of a video clip recorded in Harare.

In the end I think it was all about how our deeds, good or bad will follow us to the grave.

Which brings us to the question of why patriots who sacrificed their lives for Zimbabwe or contributed to the country’s development would shun being buried at the national shrine.

Burial at the national shrine was seen as the ultimate honour for any Zimbabwean.

One of the first people to cast aspersions on that honour was former Zanu PF stalwart, Edgar Tekere who famously said he did not want to be buried at the Heroes Acre where somebody would be “speechifying over my dead body”.

In fact, he did it together with his friend Enos Nkala.

Amid reports of having changed their minds, they were subsequently buried at the national shrine.

Respected politician, Cephas Msipa had also indicated that he wanted to be buried next to his wife in Gweru, but a unique combination of factors including relationships allowed some people to bury him at the Heroes Acre against his will.

Another real national hero, Welshman Mabhena was reported to have also pleaded: “Please don’t bury me among those thieves.”

The seed had been planted and people’s minds ventilated.

Given the use of burial at the Heroes Acre as a political weapon, we could see more either being denied burial at the shrine or refusing to be buried there.
Gushungo Chete Chete!