ED under fire over Dabengwa ‘snub’ 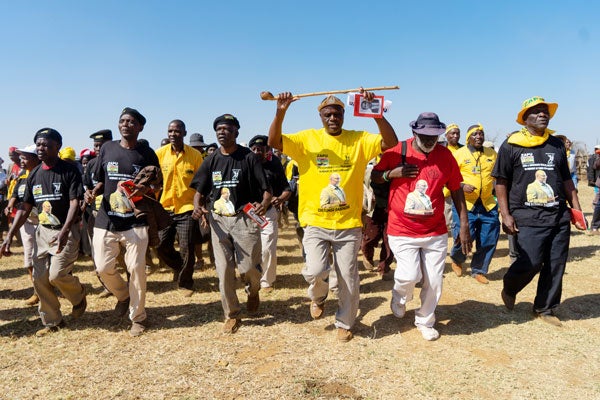 Dabengwa, who died on May 22 in Kenya, was buried at his home in Ntabazinduna yesterday after his family said he did not want his remains to be interred at the National Heroes Acre.

Chamisa addressed the mourners at the insistence of Dabengwa’s wife, Zodwa.

“Is it not a sad indictment that you have (South African) President Cyril Ramaphosa sending somebody to represent him yet we have our vice-presidents and our president not coming to honour this man?” the MDC leader asked rhetorically.

“I am really heart-broken that they have decided not to give the honour that is required to this man.

“This man was a principled man. In our country, fighting for principles can earn you ostracisation, marginalisation, being arrested or being killed.”

George Charamba, the presidential spokesperson told the State controlled media that his boss does not attend funerals of heroes that were not buried at the Heroes Acre to accord the bereaved their “privacy.”

Chamisa’s deputy Welshman Ncube said it was sad the country’s leadership did not see it fit to attend Dabengwa’s burial.

“It’s extremely sad that the leadership of this country have seen it fit, in spite of all our differences, not to be present at the funeral of really one of the foremost icons of our liberation struggle.

“Very few contributed as much as Dabengwa did to the success of the liberation struggle,” Ncube said in an interview after the burial.

“Even if you we were to discount his politics post-independence with which obviously the government of the day disagreed, you should acknowledge that he played a much greater role than all those who claim to be our leaders today.

“They should at least have the humanity, the decency to come and bid him farewell, but I suppose it’s expecting too much from a regime that appears to be clueless on the most basic of things that are happening in this country but it is not going to take away anything from Dabengwa in respect to his contribution to this country.”

Meanwhile, mourners drowned Moyo’s speech with boos as he spoke on behalf of Mnangagwa.

Dabengwa was the third national hero not to be buried at the Heroes Acre in the last six months after the late Phineas Makhurane and Oliver Mtukudzi insisted before their deaths that they wanted to be buried at their rural homes.