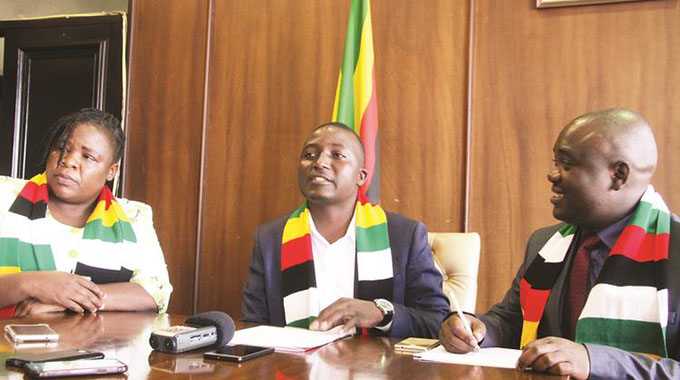 Farirai Machivenyika Senior Reporter
The Zanu-PF Youth League has called on youths to participate in the harmonised elections, amid indications that at least 30 percent of Zanu-PF candidates that have submitted their curricula vitae (CVS) to contest the ruling party’s primary elections are youths.

This was said by Zanu-PF Deputy Secretary for Youth Affairs Cde Lewis Matutu, while addressing a Press conference at the party headquarters in Harare yesterday.

“We are encouraging our young people to register to vote because in as much as they may make noise that they support the President, it won’t make sense if they are not registered to vote,” he said.

Cde Matutu said they would support whoever would be voted to participate in the elections as young people.

He said they had engaged in various programmes to mobilise support for the President and the party ahead of the elections through countrywide launch of the #EDhasMyVote campaign.

Cde Matutu thanked President Mnangagwa for his efforts in turning around the economy.

“The President has been doing a lot since he came to power and we feel it would be unfair of us to keep quiet instead of encouraging him and appreciating what he has done and supporting him,” he said.

Cde Matutu took a swipe at MDC-T leader Nelson Chamisa for orchestrating violence against his opponents, as seen by the beating up of his rival Dr Thokozani Khupe in Buhera and Bulawayo recently.

“This will push me to say he is an illegitimate leader and as the Youth League we denounce the gospel of political violence that he is preaching.”