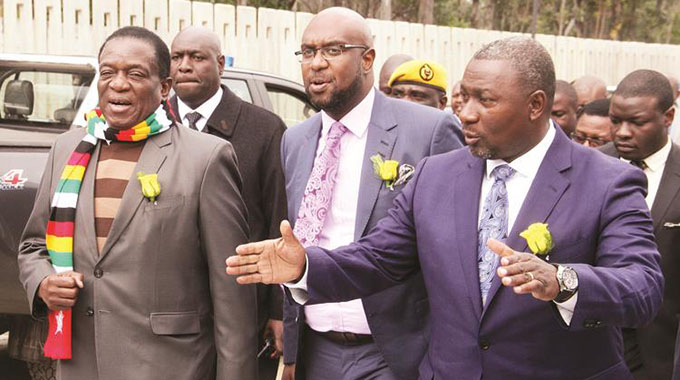 Felex Share Senior Reporter
President Mnangagwa yesterday called on Zimbabweans to reject ploys by MDC-Alliance to foment instability and chaos ahead of the harmonised elections saying focus should be on modernising, industrialising and developing the country.

Officially opening the $22 million Postal and Telecommunications Regulatory Authority of Zimbabwe (POTRAZ) headquarters in Mt Pleasant, Harare, the Head of State and Government said malcontents had no place in the new dispensation.

This comes in the wake of plans by MDC-Alliance officials to invade the Zimbabwe Electoral Commission (ZEC) offices demanding that the independent electoral body accede to its so called electoral reforms before the July 30 polls.
The alliance, led by MDC-T faction leader Mr Nelson Chamisa, said it wanted to disrupt election preparations until the demands were met.

ZEC has emphasised that the demands have no legal basis.
“As we approach the final days before our harmonised general elections, I appeal for continued peace, harmony, unity and love among all Zimbabweans. As we canvass for political votes, let us remain alive to the reality that we are all one people, one nation, united by one flag and one national anthem.

“I urge fellow Zimbabweans to reject manoeuvres by some among us, to cause instability and mayhem in our beautiful and peaceful country. What unites us is much greater than what could ever divide us. Let us therefore remain focused on our collective goal and responsibility to modernise, industrialise, prosper and develop our country.”

Turning to the $22 million POTRAZ building, whose construction began in 2013, President Mnangagwa said the infrastructure was in sync with Government’s quest to develop appropriate and modern infrastructure across every sector of the economy.

He said infrastructural development was a key enabler for industrialisation, human development and economic growth.
“It is the basic physical and organisational structure needed for the operation of any society and enterprise and necessary for any economy to function,” he said.

“It facilitates the production of goods and service as well as the distribution of finished products to domestic and international markets. The construction of this multi-million dollar building is a symbol of Government’s commitment and confidence in the postal and telecommunications industry in Zimbabwe.”

President Mnangagwa said the ICT sector was a catalyst and pillar for socio-economic development and growth.
“I urge all sectors to leverage on ICTs to stimulate innovation and enhance business and product competitiveness,” he said.

“As Government, we urge POTRAZ to diligently continue playing its role of creating a competitive environment for the provision of affordable and universally accessible postal and telecommunications services and promoting the interest of consumers with regards to accessibility, affordability, availability, quality and variety of services afforded by operators.”
He said the new building should see POTRAZ scaling up operations and effectively delivering more services.

“Furthermore these premises must conjure and inspire the spirit of commitment, dedication to service, unity of purpose, honesty, integrity accountability and transparency,” said President Mnangagwa.

He said Government had taken a decision to merge POTRAZ and the Broadcasting Authority of Zimbabwe (BAZ) in view of the technological convergence which has blurred the distinction of platforms, in relation to service provided.
The decision, the President said, was expected to bring efficiency and ease of doing business.

He implored the Ministries of Information, Media and Broadcasting Services and Information Communication Technology and Cyber Security to expedite the merger as per the Cabinet decision.

“I challenge POTRAZ to be more transparent in the use of the Universal Service Fund (USF) to ensure broader access to postal and telecommunications services by all our people, regardless of their geographical location, ethnicity, or other factors,” he said.

“In this vein, the expectation of my Government is that you will increase the financing of the extension of information communication infrastructure to under-serviced areas, the underprivileged, women and youths as well as people living with disabilities. Equally important is the need to use the Fund to promote research, development, innovation, inventions, start-ups and general training in ICTs.”

ICT and Cyber Security Minister Supa Mandiwanzira said POTRAZ had hit the ground running to achieve set targets.
“They hit the ground in line with the call you (President Mnangagwa) made during your inauguration,” he said.

“To show this, for a building that was started in 2013, 40 percent of the construction was done in the last nine months.”
POTRAZ director general Dr Gift Machengete said the L-shaped new premises would have multiple purposes.
“The building offers the ambiance, space and business facilities that meet today’s expectations,” he said.

“It has an auditorium for national and international conferences. It also has gymnasia, tennis and basketball courts.”
Yesterday’s event was attended by chief executives and managing directors of parastatals and State-owned enterprises, service chiefs and Government officials.