Herald Reporter
GOVERNMENT has urged women who were allegedly raped by some rogue members of security forces to report the abuse to the police.

The Zimbabwe Republic Police is also urging Non Governmental Organisations (NGOs) providing so-called safe houses for victims to facilitate the reporting of such cases so that due process can take place.

Despite a glut of allegations of systematic rape by security forces, only one case has been reported — in Chitungwiza — and is being investigated.

“Rape is a heinous crime, cognisant of this fact, it is the duty of the police to investigate all reported cases of alleged rape,” Minister Mutsvangwa said.

“However, to date, only one case of rape has been reported in Chitungwiza and the police are seized with investigations on the matter.

“All women who were allegedly raped are encouraged to come forward and report the cases to the Zimbabwe Republic Police Victim Friendly Units which can be found at every police station around the country,” added Minister Mutsvangwa.

She assured the victims that their safety was guaranteed.

“All women, who were allegedly raped, are encouraged to come forward and report the cases to the Zimbabwe Republic Police Victim Friendly Unit which can be found at every police station around the country. The unit is led by a female Commissioner, hence, all affected women will be treated with empathy, compassion, respect and due care. Their safety will be guaranteed,” said Minister Mutsvangwa.

She said Government will not condone criminal behaviour by any member of the society.

Minister Mutsvangwa urged the rape victims to report timely to the police.

“Government does not condone and will never tolerate criminal behaviour by any member of society particularly those in positions of trust.

“Government wishes to underscore that it is critical for rape cases to be reported in a timely manner to the police. While reporting cases to NGOs for counselling services is helpful, the police can only act on alleged cases if victims come forward, Government urges the NGOs to encourage and support women who approach them to report the cases to the Police Victim Friendly Unit,” she said.

She said in order to ensure the anonymity of victims of the alleged rape cases, the affected women could use the following WhatsApp number, 0712800 197.

Commissioner Charamba appealed to NGOs to encourage alleged victims they were housing to report to the police in the interest of justice. 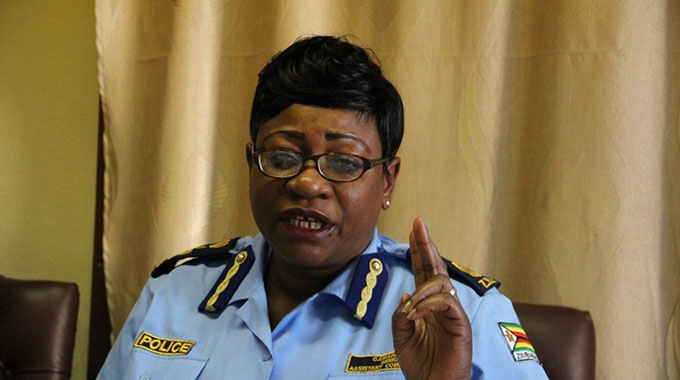 “In the same vein, we are appealing to Non Governmental and Human Rights Organisations who are allegedly providing shelter to alleged victims to consider the rights of the individuals concerned and encourage them to make official police reports. Preventing them from exercising their right of access to justice (making police reports) is doing them disfavour as the police have a constitutional mandate to investigate all such cases and refer them to court, justice delayed is justice denied. All aggrieved members of the public should come forward and report to the police so that thorough and comprehensive investigations are conducted,” said Commissioner Charamba.

Meanwhile, the security services have arrested several individuals who have been committing various crimes following the recent riots, including some clad in military uniforms.

According to police, one Tranos Muzanenhamo (28) was arrested in Epworth, Harare, after he was found clad in military attire.

“Investigations are underway to establish where he got the military outfit and ascertain any other offences he might have committed,” she said.

In another case, a Harare man was arrested as he  attempted to have a military identity card produced in his name.

“We once again thank members of the public who continue to provide valuable information to the police which has led to recovery of looted goods and account for those involved in public violence,” Comm Charamba said.