Restoration of a bloody legacy 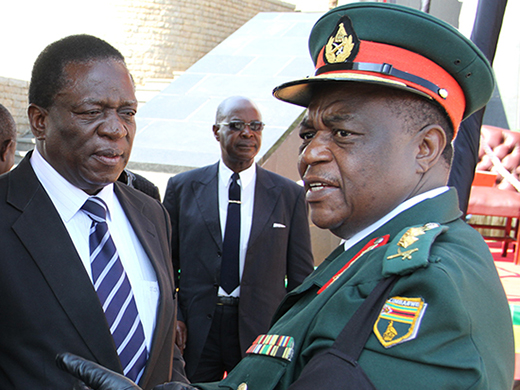 Source: Restoration of a bloody legacy – The Zimbabwe Independent July 27, 2018

WHEN it comes to such watershed elections and contestations for power as the first post-Mugabe vote that Zimbabwe is about to experience, politicians and political systems are known to resort to their tried and tested methods of success and survival.

When threatened power is known not to waste time experimenting with pretensions, but to strike with its last arsenal. These elections are therefore going to force out the true characters of individual politicians and the real qualities and characteristics of power at its worst.

The present calm and its accompanying excitement in the country conceals is calm before the storm where the true historical and political colours of individuals and their organisations are going to come out. This is going to be an indecorous and cutthroat scramble for political power.

The November 2017 coup that ousted former leader Robert Mugabe has so far been sanitised as having been a smart or benevolent coup, but is soon to come out and show its true ingredients as a blood-sucking coup like all others. That recent explosion at White City Stadium in Bulawayo will soon appear as having been a warning shot that always precedes catastrophic explosions.

Well-known Zimbabwean politicians and former guerillas will live up to their well-understood bloody reputations and titanic world powers from the West and the East will also take their place as infamous and dangerous imperialists that are out to preserve and fortify their presence in and control of Zimbabwe as a political and economic outpost.

Old friendships and durable alliances are going under a test that they will not survive as enmities will be forced out from behind political marriages of convenience. Many Zimbabweans and others ask the question what exactly will happen in the immediate polls and my answer, based on observations of individual politicians, history and the powerful forces involved, is that not even politics will happen but power itself will take place, it will be a true who dares wins scenario. For that reason, what everyone is looking at as the tight contest between Zanu PF’s President Emmerson Mnangangwa and MDC Allianceleader Nelson Chamisa is the true proverbial curtain-raising and rehearsals that precedes the real dramas.

For my present allegations to make their sense, I must delve, within the perimeters of what an opinion column can do, into some details of the invisible forces and the invisible elections that are taking place in the dark behind the political curtains. What will be monitored by international observers and what the Zimbabweans will participate in are not the real elections whose result will determine where power goes.

Even the most astute scholars and journalists have prevalently ignored the international forces that came to play in the removal of Mugabe and what their visions of a post-Mugabe Zimbabwe is. The British have put their money on a strong, even if rogue, leader of government that will have a convincing civilian and democratic mask.

By strong I refer to an individual that will take such tough decisions as to return some farms to white commercial farmers that lost them, restore some factories to their white owners and practically undo what Mugabe did in his own catastrophic pretensions and attempts to give the economy to black Zimbabweans. Under this British sponsored client-regime Zimbabwe will be a colony again in the true reversal of that Zanu PF slogan.

Mnangangwa is the anointed horse for this British race for the return to the Zimbabwean polity and economy. China to a larger extent and Russia to a lesser, want an openly militarised and authoritarian political regime that will protect their planned huge investments in the country. Their plans involve the takeover of big Zimbabwean mining and industrial projects including the exploitation of rich diamond and gas reserves in the volatile and politically charged Matabeleland region.

I have written before of the thickest belt of diamonds in Southern Africa that Matabeleland conceals and which was known and also treasured since the times of Cecil John Rhodes and which gave Zimbabwe the nickname “Jewel of Africa”, and this is the jewel, combined with the gas, that might degenerate the country into an internationalised civil war.

In their dark and imperial plans for Zimbabwe, China and Russia prefer Mnangagwa’s deputy Constantino Chiwenga as head of the strong state and weak nation that they seek to bring to life in Zimbabwe. The present elections are therefore an open rehearsal of closed and hidden war between the West and the East in our small country and the proverbial chips are down. Each one of these forces will have their men and their way, and do not care how the loser is disposed of.

I previously wrote of the trouble in paradise in Zimbabwe where the civilians and their military handlers in Zimbabwe were in bitter disagreements about the future of the country after Mugabe. This was well before the White City Stadium explosion. Mnangangwa spoke in passing of a vice-president that has openly told him that he wants to be president.

Chiwenga also took the trouble to openly dispute and correct Mnangagwa’s folkatale about how he escaped the country, walking for nine hours and his brave son disarming people that were prepared to shoot him down.

The army escorted and safely secured Mnangangwa out of the country, Chiwenga firmly stated. These disagreements would have been small if power and its future were not at stake and if the personalities involved were cherubims and seraphims, and if there were not dark imperial forces behind them.

The pretentious civilian narrative and the military narrative about the coup and its aftermaths are in conflict and so are the figureheads that represent them. Making matters truly worse is that the military intelligence and the civilian intelligence, that is the CIO, are also divided beyond repair with some details not functioning at all and existing under the surveillance of other details.

There is the now traditional tension between the army and the police which is not helping the stability and professionalism of the uniformed forces, allegations of plots and sabotage by one about the other group are afoot.

Solomon Mujuru from his grave and Mugabe from his house imprisonment still command the loyalty of some sleepers in the security sector and these are not easy to identify as they are trained and skilled at exactly that, sleeping and pretending, saluting up when they mean down, and are waiting for that moment of reckoning.

The coup itself politically agitated the security sector, pleased some and embittered others, and the sector is poisonously politicised. The hidden fight which is about to go open between the civilian and the military leader is the true recipe for disaster. Silently, the military and political captive, Mnangangwa, prays for an electoral outcome that will necessitate another GNU that will help push the army back to the barracks under the pressure and guidance of the international community.

This time, for him, there is no possibility of stories about walking for nine hours in escape because those that are protecting him are exactly the same people that endanger him. The White City Stadium explosion was a carefully designed, inside job, a warning shot to remind someone of who exactly the decision maker and holder of power is.
Mnangagwa is a poorly developed apprentice of Mugabe, ousting him may not be as complicated and as safe as that of Mugabe was. Many of us looked aside when he publicly claimed a plot to oust him after the elections but it was a true scream from a cornered politician.

When Mugabe was ousted, thanks to Zanu PF’s primitive political culture, many Karangas celebrated that it was their time to eat in Zimbabwe, true to the tradition of Zimbabwean tribalism. As this happened some powerful Zezurus in the security and sector and outside determined themselves to stop the celebrations and press upon the perpetual hegemony of the Zezurus as real owners of power and the country.

The same tradition of tribalism and nepotism has ensured that in the security sector individuals are recruited and promoted along bloodlines. Making the sector a messy network of relatives and friends with ethnic rather than professional loyalties. The sector is next to impossible to professionalise and democratise. There is trouble in this paradise and only a spark will ignite the multi-directional inferno. Mugabe knows this very well and understands that he is the only one that can use his symbol to mend the deadly cracks, silently he waits for the day he is called to mediate.

Negligently, scholars and journalists did not follow up on the explosive disclosure by the careless and also revealing Chiwenga. He spoke publicly about disclosing to the widow of Josiah Tongoogara the true details of who exactly killed her husband and why, he outed the assassination and the assassins.

From the death of Hebert Chitepo, that of Tongoogara, many other car accidents and incidents, disappearances, the extra-judicial executions in the camps of Mozambique, and the death of Solomon Mujuru, the Zanu PF legacy has been a bloody legacy of assassinations and eliminations.

The people that carried out these killings and such mass-murders as the Gukurahundi genocide are now in power and their power is threatened in this election. The bloody legacy is up and out to preserve and fortify itself. The elections are an open performance of choreographed credibility and accountability to earn international legitimacy by infamous and dangerous politicians.

The real Himalayan struggle for power is in the background and involves dirty international forces. Zimbabweans must expect that dirty politics, evil politicians and dark international forces will live up to their infamy. A legacy of blood will restore itself true to its character.

Macaphulana is a South Africa-based academic who writes in his personal capacity from Pretoria. — dinizulumacaphulana@yahoo.com