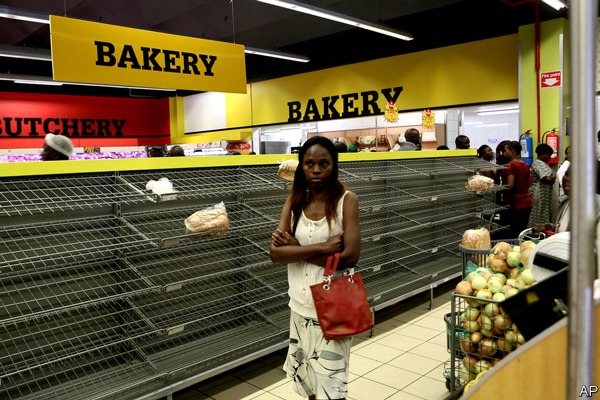 MAJOR retailers throughout the country have defied a government price control directive issued last week and instead hiked the prices beyond the reach of many impoverished Zimbabweans, a snap survey by NewsDay has revealed.

Vice-President Kembo Mohadi last week ordered retailers to revert to the pricing level obtaining on March 25 as part of measures to cushion consumers against the harsh economic environment.

The cost of most basic goods shot through the roof end of last month after President Emmerson Mnangagwa announced the national lockdown to control the spread of the
coronavirus.
The price control measure was widely criticised by economists who warned that it would lead suppliers to starve retail outlets and supply parallel market dealers.

A survey by NewsDay in Harare and Bulawayo over the past few days revealed that retailers were revising prices of basic commodities upwards almost daily to keep pace with the exchange rate.

Two litres of cooking which was pegged at around $60 at the end of March now costs $190 with prices of other goods such as flour and washing soap changing daily, depending on the retailer.

Only the price of bread, at $30 a loaf and perishable farm produce have gone down, possibly because of their short shelf life since shops are required to operate for only four hours a day.

“Prices of the selected products have not gone up since the price moratorium,” Mutashu said.

“Subsidised mealie-meal is being sold at the regulated price and thanks to (the) Grain Millers Association of Zimbabwe and (the) Zimbabwe Republic Police (ZRP) for coming up with the zonal system (of maize meal distribution to shops).

“We are finalising the operational modalities that should see a joint monitoring system between manufacturers of the selected products, retailers and Consumer Council (of Zimbabwe).”

Mutashu added: “The committee should be in the market next week. We are also working round the clock on a robust supply side intervention to ensure there won’t be shortages.”

On Friday, Finance minister Mthuli Ncube claimed that the price increase moratorium had been amicably reached between government and industry players.

He was addressing journalists in Bulawayo after touring Ekusileni Medical Centre.
“The idea of the meetings with business is to reach a consensus on prices,” Ncube said.
“This is moral suasion. We want to reach consensus with business on prices so that we have a moratorium on prices because clearly as part of sustaining livelihoods, we want prices that are stable.”
He added: “We don’t want prices that will make inflation run away. So we would want business to support us, as government, in that regard.”
He denied government was imposing price controls, insisting this was by mutual consent, but could not answer why the prices remain high when industry volunteered to reduce the prices.
“Why should there be a shortage when we are using moral suasion? The idea is to have government and business work together and meet each other halfway.

“Business has been working and helping government respond to the COVID-19 crisis. There is a lot that has been done by business and continues to be done during this period,” he said.
Industry and Commerce minister Sekai Nzenza was not reachable for comment yesterday.

Most of the analysts said the move was wrongly timed as businesses were already reeling from the effects of the debilitating COVID-19 pandemic.

Reports show that about 25% of businesses in the country could fail to bounce back post the COVID-19 pandemic.

The reports also state that hundreds of thousands of jobs could be lost as a result of the failure by these businesses to bounce back into operation.

Analysts, in separate interviews, said the country could experience a crippling shortage of basic goods if government insists on price controls.

“The government, through this decision, is creating a situation that will result in the collapse of business the same way Makro Wholesalers, a big giant in the retail business, collapsed,” he said.
“It would have been better for the government to monitor prices than wanting to control the prices.”
Tony Hawkins, another economic analyst, warned that the country could slide back to the 2007-8 shortages.

“We had all agreed that trying to control prices was a wrong approach for the government. It is surprising what has led to this change of heart on government’s part and also led to what we are going to be dealing with going forward.”

Respected economist, John Robertson opined: “I am very confident that the move to reverse the prices to the March levels will indeed result in shortages of basic commodities because the producers of these products will not be able to get stock and raw materials to produce these basics in the manner in which they did in March.”