River of many hippos and the bronze statue

Source: River of many hippos and the bronze statue – The Zimbabwean 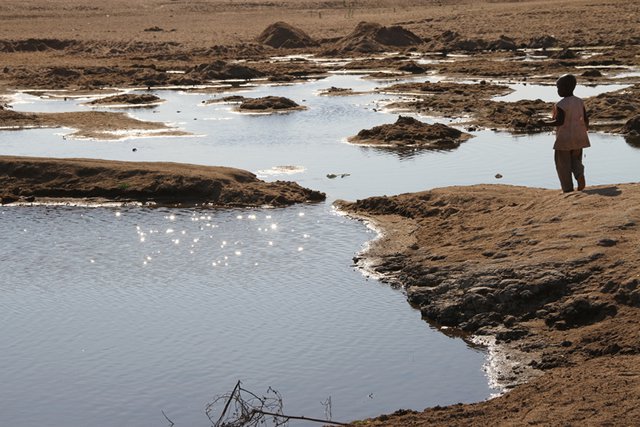 Winter arrived with thunder, lightning and rain in Zimbabwe this week. Thunder and lightning in June are unheard of and sent us running for cover and pulling out plugs. One day later the cold arrived and as I write this letter the forecast is 4 degrees Celsius rising to a maximum of 16 at midday in Marondera and 2 degrees rising to a maximum of 12 in Chimanimani today.  Why Chimanimani you ask, read on!

On the banks of the beautiful Umvumvumvu River north of Chimanimani a Sausage tree dripping with long brown pendulous fruit provides a perfect stopping place. The name of the river literally repeats the word hippo three times and means river of many hippos (mvu, mvu, mvu). The name of the river is at first hard to get your tongue around but once you know the meaning, it’s a river you’ll never forget. But it’s not just the name of the river that’s memorable now, it’s also the new bridge here and over so many more rivers along the road to Chimanimani. The sturdy new bridge over the Umvumvumvu River with a pretty stone picnic site at the Lay-by near the riverside has a plaque identifying that the Beit Trust contributed towards the reconstruction of this bridge after Cyclone Idai tore away huge chunks of the bridge and carried them down the river in March 2019. The dramatic photographs of the Umvumvumvu River bridge then and now are testament to the huge heart and generosity of local and international supporters who helped put it all back together. How then can it be that people are still living in tents up the road in Chimanimani?

In the icy wind this morning, I couldn’t stop thinking about people with just a thin sheet of weathered canvas to protect them from the 2 degree cold. How is it possible that two years and two months after Cyclone Idai devastated Chimanimani so many people could still be living in tents?  On the second anniversary of the Cyclone recently, one survivor told a journalist: “Most people are still living in tents. Imagine staying in a tent every day for the past two years. We are really getting worried that this will be our life forever.” “What we thought would have happened and the promises we had been given, have not been fulfilled and we have lost hope.” (NewZimbabwe.com)

Take a trip along the winding roads, steep curves and fantastic new bridges to Chimanimani: this is the place where spectacular beauty and raw pain stand side by side; the place where ordinary Zimbabweans in their thousands reached out to help with tons and tons of food, clothes and supplies in 2019; the place where huge red scars left by landslides still stain the hills and mountains and massive rivers of boulders still hide their secrets.

Is this then the same Zimbabwe that just erected a huge footbridge and three-metre high bronze statue of Mbuya Nehanda on a one and a half metre pedestal in central Harare? The project was run by the Office of the President and Cabinet, Home Affairs and Cultural Heritage Ministry, department of Public Works, National Archives and National Monuments. The lead architect said in the Herald newspaper that the monument was built using steel, cobblestone, concrete and glass. … 45 tonnes of reinforcement steel, 58 tonnes of structural steel…  480 cubic metres of premix concrete … 450 panels of glass and  58,000 stone bricks. The lead architect was quoted in the Herald as saying: “This project cost $56 million” and took 11 months to complete. The ‘consumables’ imported from South Africa for the construction were granted free of duty by the Zimbabwe Revenue Authority.” (Pindula)

So in just eleven months a bronze statue and footbridge were erected in Harare meanwhile 500 kilometres away hundreds of cyclone victims are still living in dirty white tents covered in thick red dust two years and two months after a Cyclone destroyed their lives and homes, left hundreds dead and hundreds more missing, buried in mud and rock slides and swept away in raging rivers. Oh Zimbabwe, where are your priorities?