Robert Mugabe did it, why can’t I did it too?

Source: Robert Mugabe did it, why can’t I did it too? – The Zimbabwe Independent 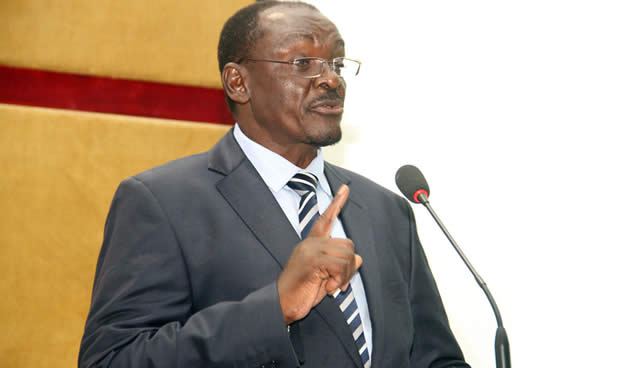 What was revealed this week about Vice-President Kembo Mohadi and a young woman spy in his office has got a precedent. So, instead of the VP ruing the day he met Abbigal Mumpande, he must be stroking his beard in self-congratulation saying: “If Robert Mugabe did it, why can’t I did it too?” (Forgive the Kaundan grammar)

In the early-to-middle-1980s former president Mugabe was romping with his young secretary Grace down the corridor of Munhumutapa Building while his Ghanaian wife Sally was dying with a kidney ailment. Notwithstanding the moral repugnancy of the whole thing, Mugabe went on to rule the country uninterrupted for another 30 years and the young secretary went on to be the country’s First Lady who, it must be said, changed the course of Zimbabwean history.

Reports say Mohadi has been having trysts with the young CIO operative in his office while her husband unwittingly guarded the entrance. There are many moral issues that come out of this. What does it mean when a leader of the VP’s stature has an extramarital affair with a junior member of his staff, let alone a married one? It becomes worse for Mohadi when it is considered that the junior staffer is married to another junior staffer in the same department.

The dictates of good leadership demand the VP should shake his head in shame and resign. But not in Zimbabwe; it looks like the whole Zimbabwean presidium has woman issues that render each one of them short of the moral ground to reprimand, let alone, urge another to do the right thing and resign. The other VP is reportedly guilty of snatching a young model from her footballer husband while the president himself is said to have taken to wife a junior member of staff in the 1980s.

This is wanton abuse of office and going by what is happening in the fight against corruption, such abuse of office is an offence. It is corruption of the highest order. In other countries where the citizenry has a say in how their affairs are run, the streets would be full of people calling for Mohadi to resign. But in Zimbabwe they would be shot in cold blood if they dared to.

Poor young Jacob Mumpande, when he confronted the VP about his indiscretions with his wife, all he was worried about was that the senior man was having unprotected sex with his wife. He wasn’t worried about the moral blameworthiness of his leader and that the leader was pulverising his wife with the aid of an aphrodisiac she supplied. This is a sign of helplessness on the part of the young man; he can’t sue his boss and, apparently, he can’t divorce his wife either because the consequences might turn out dire. So the young man loses not only his wife but his dignity too. And he has no recourse!

By the way when young Mumpande, wife in tow, confronted the VP at his home, he found him in the arms of another woman! What else does this playboy VP do besides spending his time with harlots?

South African President Cyril Ramaphosa was roundly praised when he and his Health minister Zweli Mkhize led by example by being among the first people to be vaccinated. They took the Johnson&Johnson (J&J) vaccine together with frontline medical staff. What this does is to instill confidence in all South Africans who were hesitant to have the jab that it is right to do so..

The story is different in Zimbabwe. Mnangagwa did not make that vital decision in spite of the controversy that has accompanied the roll out of the Chinese vaccine that he almost unilaterally selected for Zimbabwe.

A fortnight ago Ramaphosa again led by example by asking South African scientists to take a look at the AstraZeneca vaccine that had landed in his country for immediate use. The University of Witwatersrand, after thorough testing and analysis, told their president the vaccine was not good enough to fight the predominant strain of the coronavirus wreaking havoc in the country. Ramaphosa rightly rejected the vaccine.

On the contrary, Mnangagwa didn’t think it necessary to have the Chinese vaccine examined by local scientists to certify its efficacy even though the standard operations procedure (SOP) for any new drug introduced into Zimbabwe demands that it be done.

It might turn out the Chinese vaccine in fact works and will save Zimbabweans — it has been given positive reviews in many countries and has already been administered on 35 million around the globe — but, due process should be followed without exception.

That the SOP was not followed is what’s driving the vaccine hesitancy and the doubts that pervade the Zimbabwean populace. This is more reason why Mnangagwa himself should have taken the bold step to be vaccinated first before anyone else. That way the confidence of the majority Zimbabweans would have been boosted and the morale of the frontline staff would have got the all-important verve it needs.

That some in the presidium chose not to get the vaccine may be down to their age and suspected underlying conditions, but naysayers, who are the majority, will think that it confirms their worst doubts that this virus is enveloped in too much opaqueness. On the contrary information on the J&J vaccine that Ramaphosa took is public knowledge.

When Muckraker thought the “New Dispensation” had written kaput on the farm invasions the country woke to the news that ruling party apparatchiks had invaded a farm in the Lowveld. The invasion of Oscro Farm in Chiredzi last week is an anachronism in many ways.

First, it belongs so much in the past when the Mugabe regime looked the other way while Zimbabweans led by veterans of the liberation war set out to push the land reform programme ostensibly to correct historical imbalances in which the minority whites owned 80% of all the fertile land while the majority Zimbabweans were huddled in the infertile “tribal trust lands”.

Later, as former top Zanu PF politician the late Eddison Zvogbo said, the land reform programme turned into a shameful “racist enterprise”. This is what has reared its ugly head in Chiredzi — sheer racism.

Second, when President Mnangagwa promised to pay white former commercial farmers a staggering US$3,5 billion in compensation for the improvements they had made on the farms acquired for redistribution, everyone thought that had finally closed the land reform chapter. It gave all Zimbabweans hope that one of the biggest stumbling blocks to the lifting of economic sanctions imposed on Zimbabwe by the US had been taken out of the way and the sanctions would finally be removed and the country would move forward. But when the Chiredzi farm was invaded last week it showed Zimbabweans and the world that there is a lack of sincerity in the so-called new dispensation to move the country forward. In the recent past many farms have been invaded in similar fashion.

Third, the Chiredzi farm is under a Bilateral Investment Promotion and Protection Agreement (Bippa) which means the Italian owner’s tenure of the farm is inviolable. There are many such farms dotted around the country that are under Bippas and they belong to citizens of the very countries whose trade ties we wish to lure back after they ran away because of the lack of the rule of law in the country.

Most Bippa farms belong to Europeans and Americans who have immense influence on international financiers whose support Zimbabwe desperately needs. The lack of the rule of law is one thing that scares investors and the Mnangagwa regime has shown that it has no respect whatsoever for this bilateral trade conditionality.

As the farm was being invaded, newly appointed Minister of Foreign Affairs and International Trade, Frederick Shava must have been bidding farewell to his diplomatic colleagues at the United Nations in New York and the whole diplomatic community in Washington. It must therefore have come as a shock that the farm invasion took place when he must have been busy building bridges. Surely there should be an end to this madness.

What is needed is a presidential decree on whether the farm invasions continue or are stopped forthwith; Presidential spokesman George Charamba’s voice is not good enough.